Tim Burton’s cult classic “Edward Scissorhands” resonated with many moviegoers during the 90’s. The film’s fictional barber may have very well served as a lightbulb character for a Pakistani youth growing up in Lahore.

Fast forward to the present day where a real live “Ahmed Scissorhands” plies his trade in a tiny salon where he uses multiple scissors simultaneously to give cutting-edge haircuts.

Just 15 pairs of sharp blades coming down upon your head, no big deal. 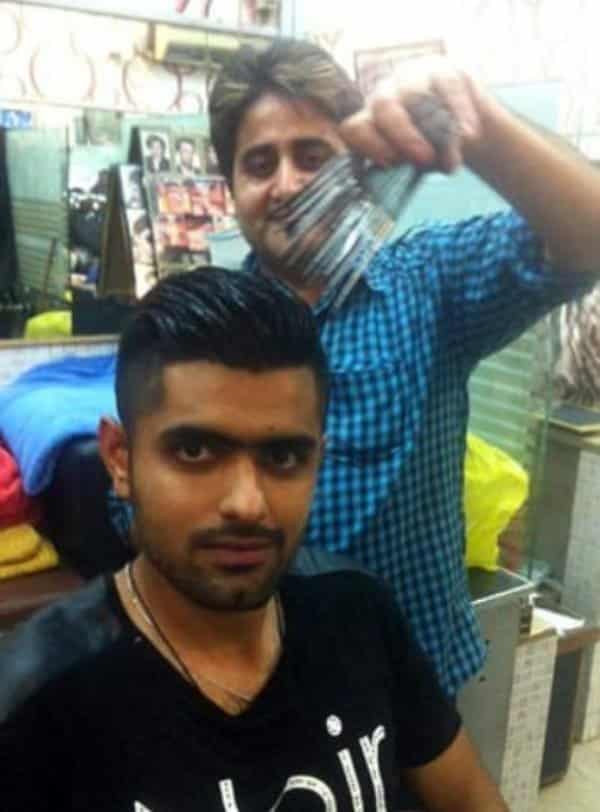 Sadiq Ali, 33, is Lahore’s very own “Shearlock Combs,” whose sheer genius with the tools of his trade allows him to expertly wield 15 scissors at once to cut hair.

Not quite Johnny Depp, but his haircuts only cost $2.00. We’ll take it!

The scissors are regular-sized and Sadiq has regular-sized hands, as well. But he clips with all 15 at once to give what his regulars call the “spicy” haircut.

“They love the spicy haircut that I have invented. It is different from the usual cut because 15 scissors are used to trim the hair and once it is done, the hair comes out really neat and stylish.”

Ali culled his technique from Chinese hairdresser, Zedong Wang, who has a world record for using 10 scissors at once to do a haircut.

“I saw his act on internet was spellbound by his talent. He was unbelievable. I was (so) inspired by him that I decided to outdo him.”

As well as a self-satisfied smirk to prove it. 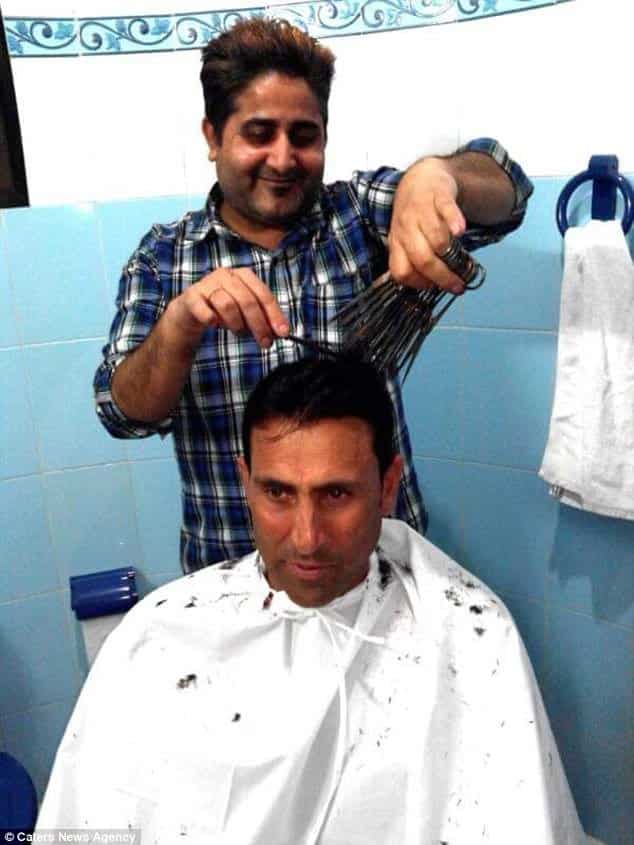 Word of mouth and the local media helped build Ali’s business base, and he currently boasts of having major team cricket players like Inzamam-ul-Haq, Umar Akmal, Sohail Tanvir, and cricket coach Mickey Arthur as regulars. 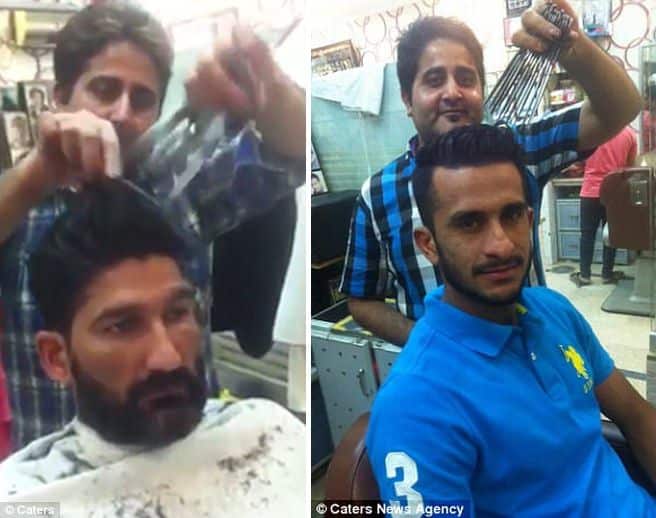 It wasn’t an easy road for Ali, however. Cutting hair with multiple scissors took quite some time and a lot of practice.

“It took me at least five years to hone up my skills. Holding eleven scissors in one hand was not an easy thing. They were heavy and it was difficult to make them work all at one time.”

Especially since he had to cut hulking former national cricketer, Younis Khan’s hair. 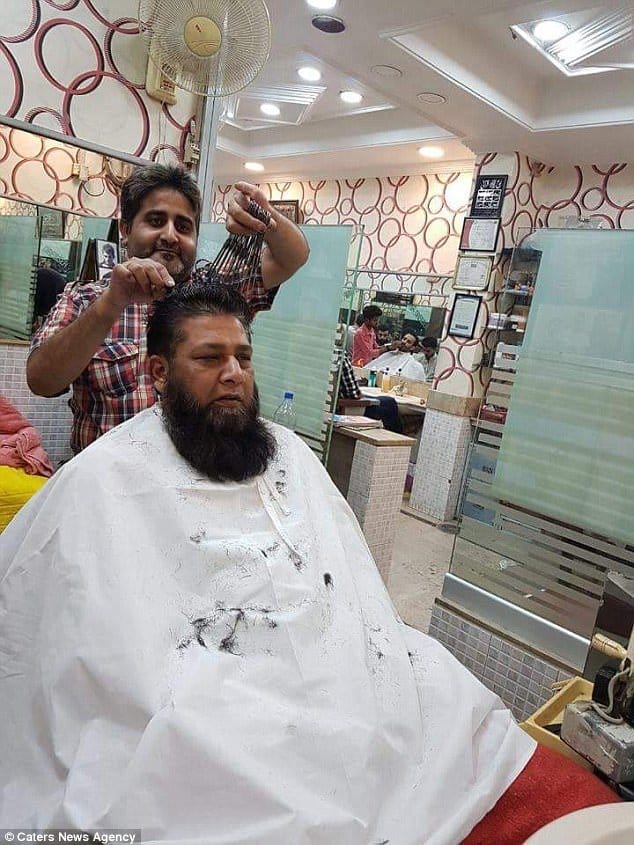 Slowly but surely, he got better. As all determined persons do who work towards their goals with singular focus. By 2011, he gave an 11-scissor haircut to one of his clients.

The rest, as they say, is scissors-tory. 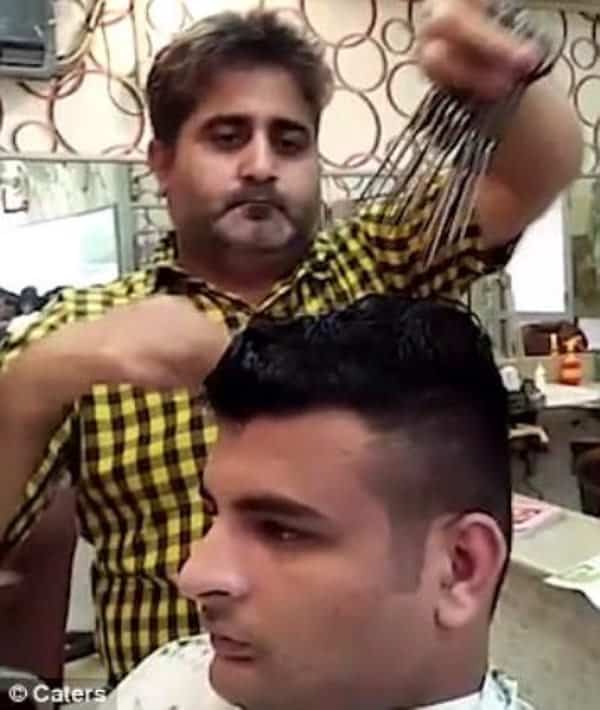 Now, Ali’s tiny barbershop is a virtual hub of activity, and Ali is hard pressed to keep up with his growing clientele who queue outside everyday.

“Every day I get swarmed by customers but I restrict the number for the services to only 20 as I want to do my job perfectly.”

His unique barbering style even brings out-of-town cricket players who drop by for a haircut before leaving for their international tours.

“It feels good that everyone appreciates my hard work.”

Ali now has his sights set on setting the Guinness World Records for simultaneously wielding 16 scissors for a haircut.