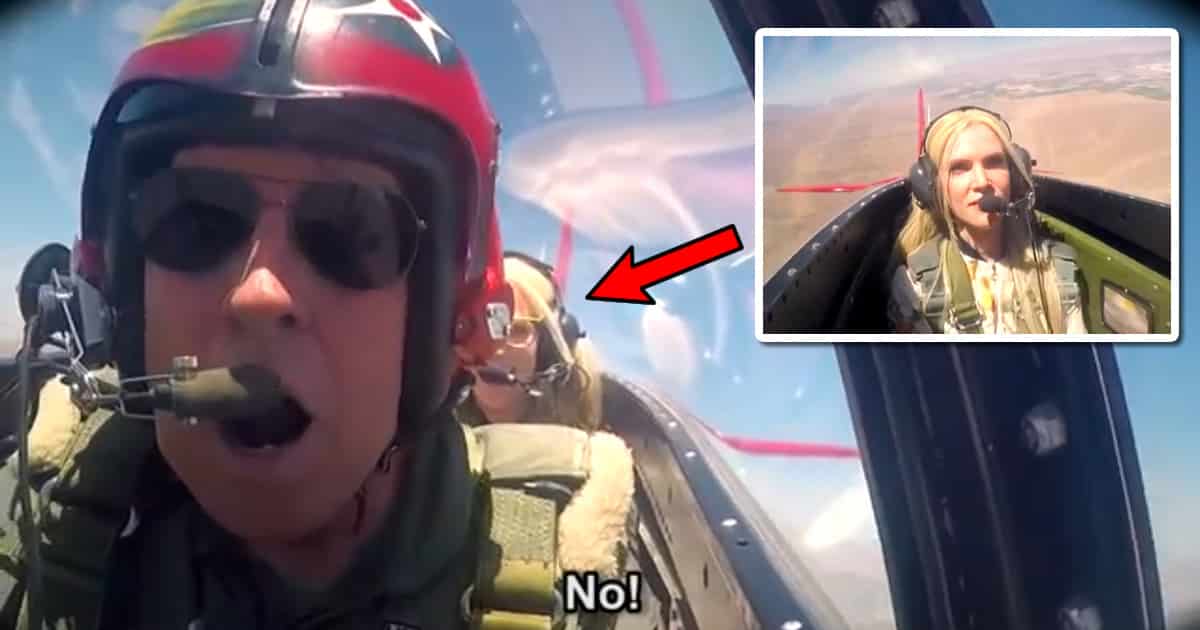 We’ve already seen quite a few videos with this kind of concept. There’s a man dressing up as an elderly person only to show up in a park, daring a youngster in weightlifting.

Another notable joke was when a female pro racer took fancy sports cars for a test drive while looking like a first-time driver, but once she took over the wheels, she showed her clueless passenger how it is to drift.

She pretended to be a nerd and took a class under flight instructor, Tom.

And now, pranksters are taking the stunts up to the skies. A group of practical jokers teamed up with another gorgeous, female pro pilot to scare the heck out of a flight instructor while they go on a practice a couple of feet above the ground.

Former fashion model, Nadia Marcinko, walked into the Warwings in Palm Springs, California, pretending to be a Youtube star who needs to take a class for her new content, but isn’t actually interested in learning to fly a plane.

Dressed to look like a ditzy, young girl, Nadia spent more of her time in class playing games on her phone while F.I. Tom kept his cool and patiently taught her about the plane and how to properly operate it.

Nadia pretended to make a few mistakes, which made Tom totally nervous.

Until Nadia showed what she really is capable of.

Of course, Nadia doesn’t actually need to undergo the basic education as she is an FAA-certified, commercial rated and aerobatic pilot, and a flight instructor herself too.

Tom didn’t have the slightest clue that he was lecturing a flying nerd who can practically do any stunts she wants with the P51 Mustang that he was speaking about in class.

So now it’s time for the test.

Tom was nervous to leave the controls to his uninterested student. But as soon as Nadia took over, she showed Tom what she’s really capable of and it blew his mind.

A gorgeous pilot and prankster, a legendary plane and a nervous victim are all we need to see in a good prank and this one certainly delivered.

Watch the whole prank from the video below.

They have no idea she’s a professional women’s motorsport racing champion.

So, today’s your first day on your new job and you’re all canned up on how things might end up with the meet and greet with colleagues and clients eh? Well, you know what they say, a little ice breaker will do you some good. However, would that still be harmless if say 2 gallons of adrenalin rush be enough for a head start?

Remember when you’re always told that you owe everything you learned from the four corners of your classroom? Well, these driving instructors might firmly contest that as what she learned, she learned it from the wild caliber of racing and drifting!

Germaine Yeap, a pro Muay Thai fighter, went incognito into a gym and asked for a sparring with the gym trainers.

Remember Maxman.tv who brought us the viral video of a professional racer girl who pranked her driving instructors with her insane driving skills? Well, it’s back with a new undercover prank.

Germaine Yeap is no stranger to the gym. In fact, she has been training for more than 6 years. She is known in Malaysia as a professional Muay Thai fighter and she often represents the country in international competitions.

When she walked into this particular gym, however, no one recognized her.

Watch Danny Leon as an old man on a skateboard own the Madrid Skate Park.

Sure we’ve seen a lot of old people who have rocked sports through races, cycling and marathons despite their old age, but we’ve never seen one rock a skateboard ramp. It seems like old people and the skateboard isn’t a good pair.

So, wouldn’t it be cool to see one do some skateboard stunts for a change?

Danny Leon, a 20-year-old skateboard star, posed as an elderly and amazed onlookers with his stunts.
With all the prosthetic and make up to add 60 years on his face, and some of his “old friends”, onlookers were convinced it was really an elderly who rocked his way on the skateboard ramp.