Not everything about humanity is beautiful and a cause for celebration. Life also has its sinister and sickening moments that send people to the pits of despair.

Sadly, many of these tragic moments have been captured by camera. These images record some of the most awful and appalling things that have happened in the past.

Warning: this may be a difficult post to view, so proceed with caution.

#1. This famous professional wrestler, just after he committed a double-murder. 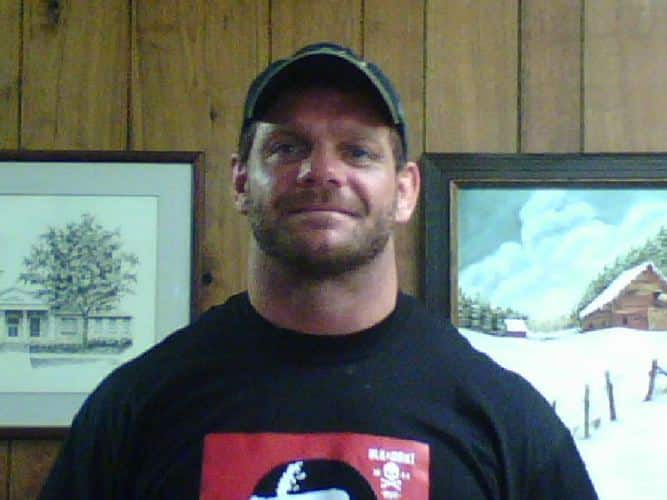 A fan took this mobile phone photo of Canadian pro wrestler, Chris Benoit just after he murdered his wife and son in June 2007. Two days later, he committed suicide by hanging.

#2. The politician who photographed his own murder. 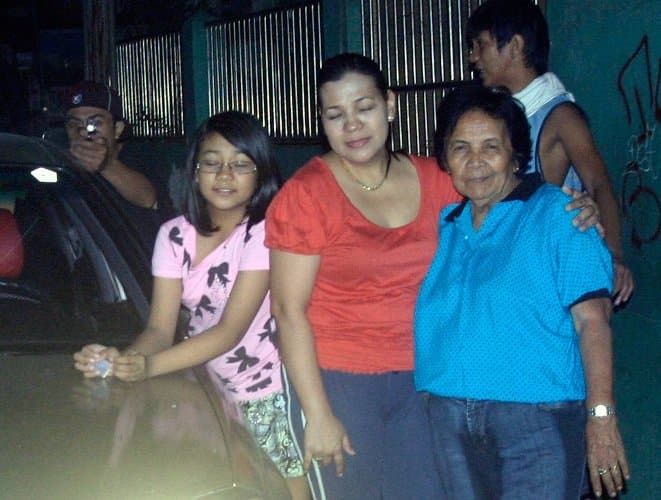 A local Philippine councilman snapped this picture of his family during New Year’s Day in 2011, also capturing the image of a hired gun sent to kill him. The victim died of a gunshot wound to the head. 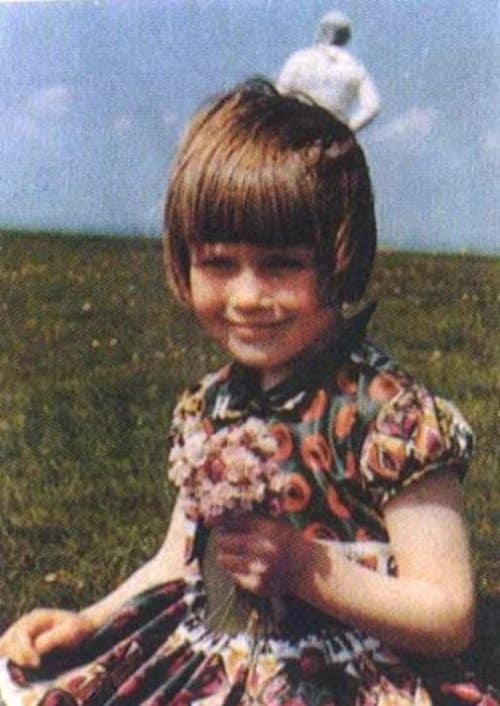 Astronaut Jim Templeton took this photo of his daughter and was shocked when this particular one was developed. It showed a full-suited spaceman behind his child when there was no one around during the time he took the photo. Film company Kodak further verified there was no tampering involved. 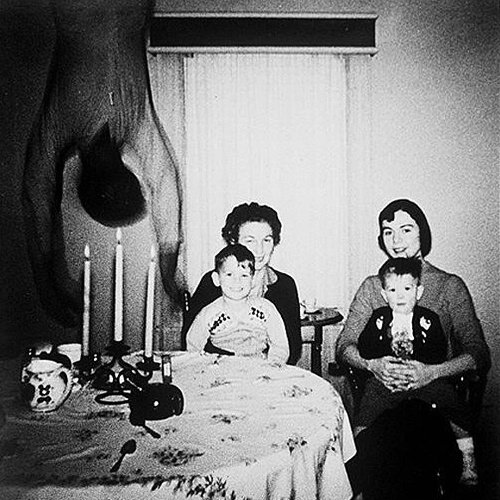 When the Cooper family moved into their new Texas home, they celebrated the occasion with a family picture. Except that the snap showed a creepy incorporeal body falling headfirst from the ceiling.

#5. A remembrance before rape, torture and murder. 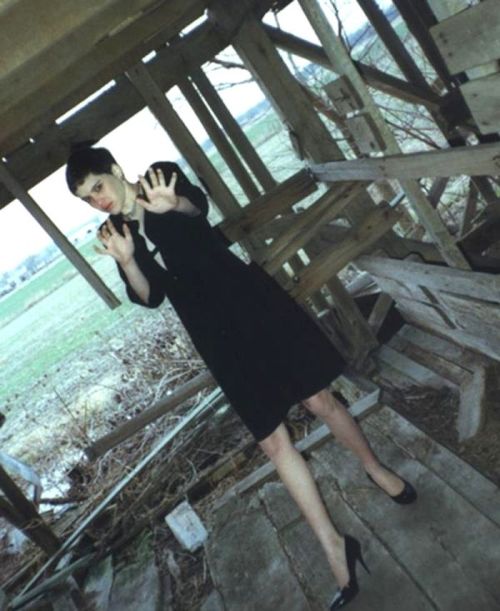 This was 14-year-old Regina Kay Walters just before she was sexually assaulted and murdered. The photo was taken by serial rapist, torturer and murderer, Robert Ben Rhoades, who dressed the young teen in a black dress and heels, forcibly cutting her hair for the occasion. 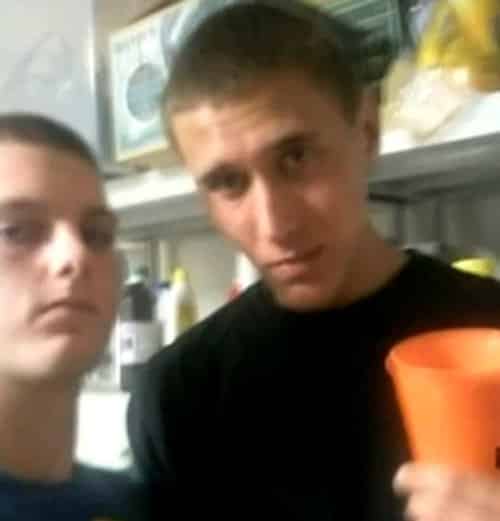 Tyler Hadley, pictured on the right, threw a party at his house where he had earlier killed his parents. This was the exact moment during the party when he told his best friend what he did.

#7. Just before a car bomb blew everyone to kingdom come. 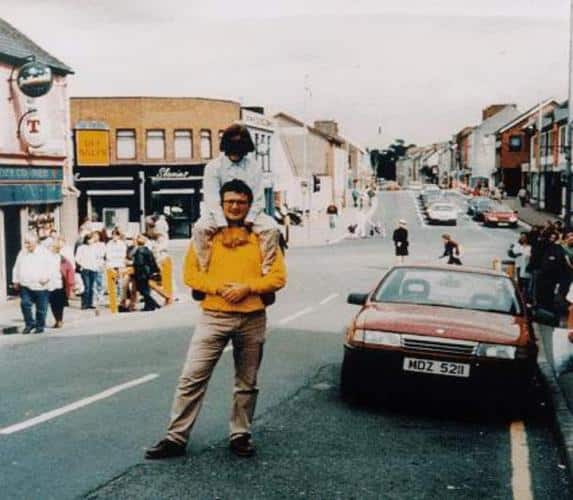 The red car in the photo exploded just after this picture was taken. Everyone in the image, including the photographer, were killed in the blast. Miraculously, the man and the kid survived. 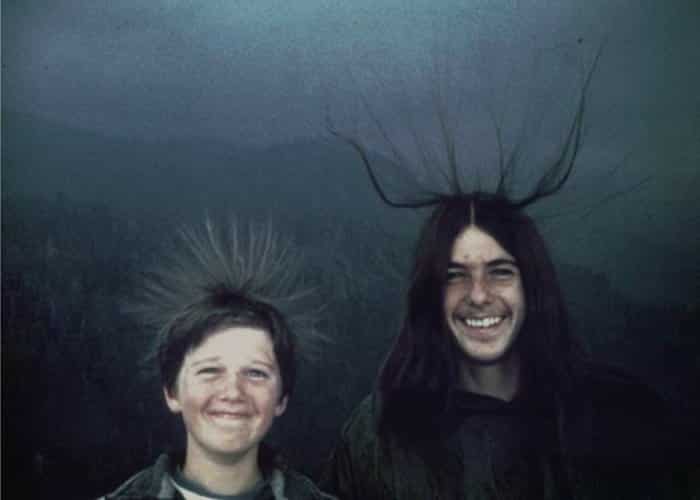 The two brothers pictured here are enjoying the effects of an electrical storm at the Sequoia National Park in California, circa 1975. Moments later, they were struck by lightning. While both survived, the brother who suffered severe burns in the freak accident eventually took his life. 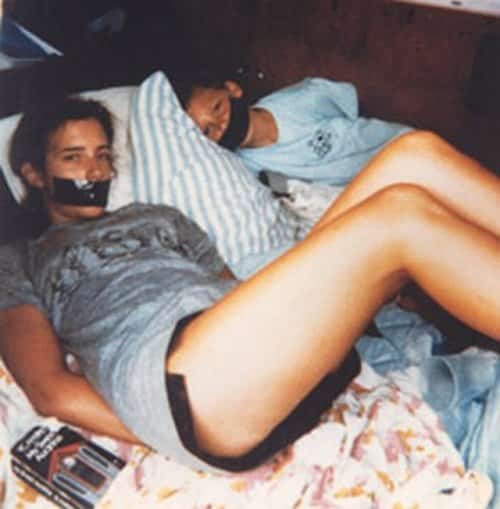 This is a Polaroid photo of missing teen, Tara Calico. She was never found. 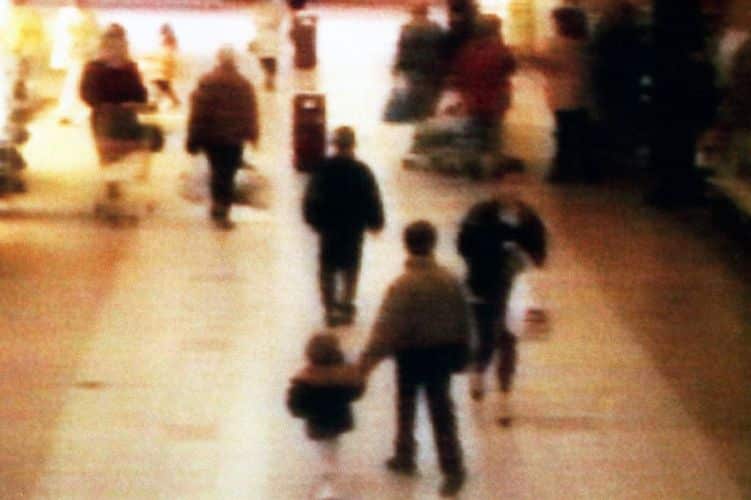 The tiny tot in the photo is James Bulger, who was tortured and killed by two 10-year-old boys, one of whom is seen leading the little boy away from his mother. Bulger was blinded by modelling paint thrown into his left eye, and suffered numerous kicks. His young killers threw bricks and stones at him, stuffed batteries into his mouth, and dropped a 22-pound iron bar on his body. The toddler was later found with 10 skull fractures, and a total of 42 injuries on his small, battered body. 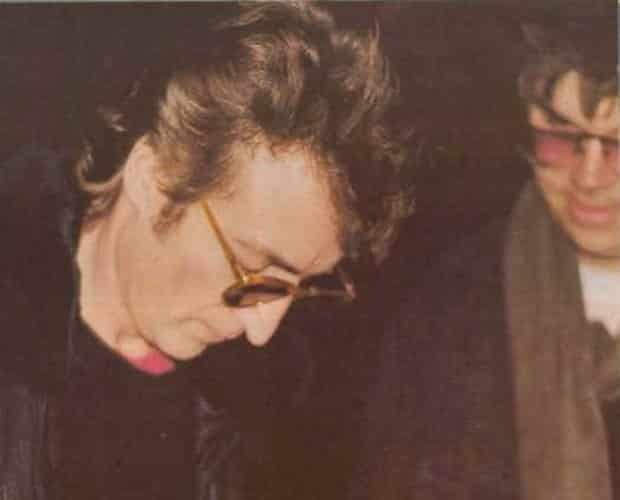 When John Lennon signed an autograph for avid fan Mark Chapman, pictured on the right, little did he know the same man would shoot him dead a few hours later. 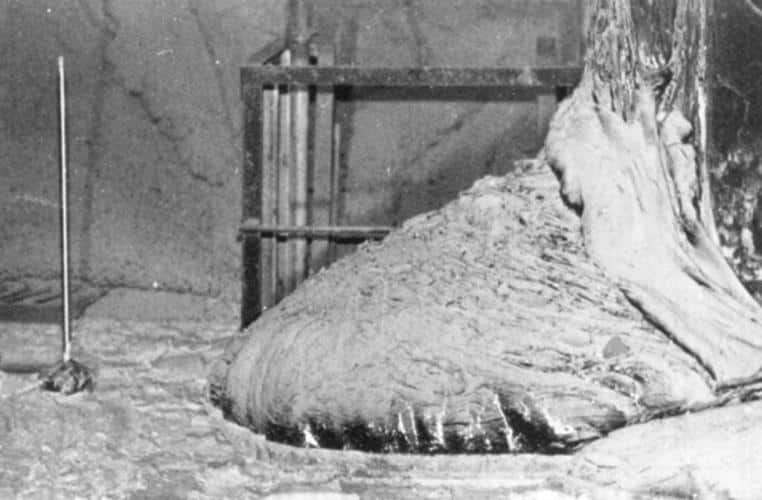 An image of the Chernobyl reactor after its meltdown in Russia in 1986.

#13. Shadow imprints of the once-living. 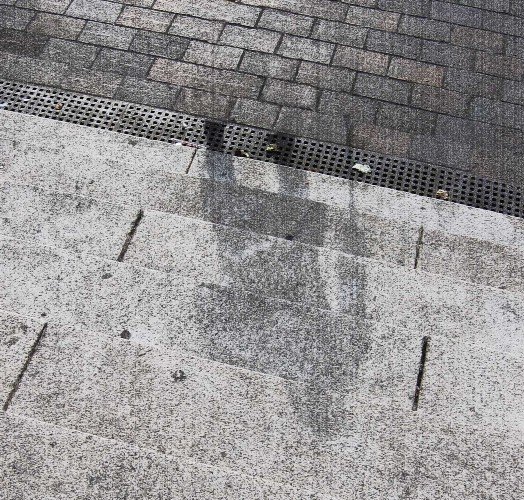 When the U.S. dropped the first atom bombs in Hiroshima and Nagasaki, they left a lasting effect – shadow outlines of people who instantly disintegrated in the blast. 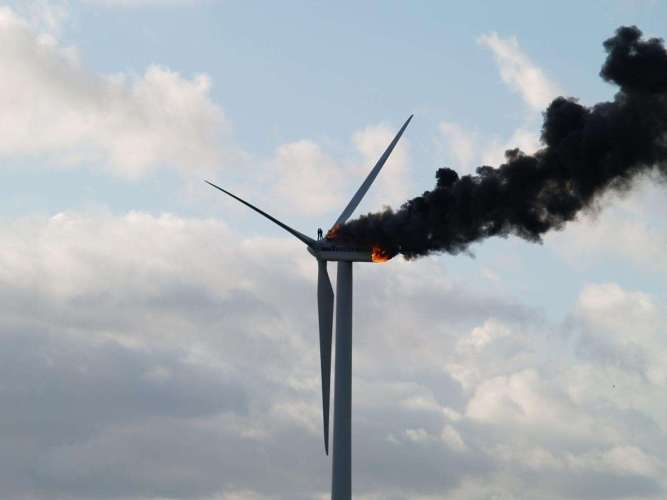 A 67-meter tall wind turbine caught fire, trapping two engineers working on it. This photo shows them hugging just before one jumped to his death. His incinerated colleague was found on top of the turbine much later. 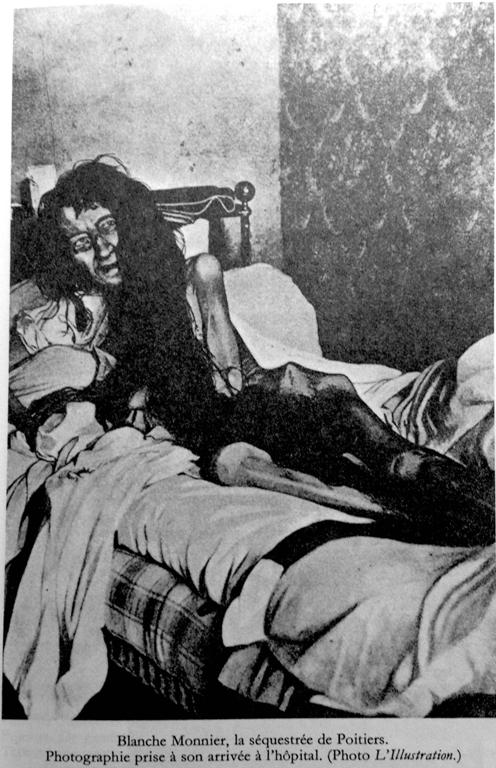 This Frenchwoman was rescued following 24 years of abuse after her mother imprisoned her in a room for over two decades. 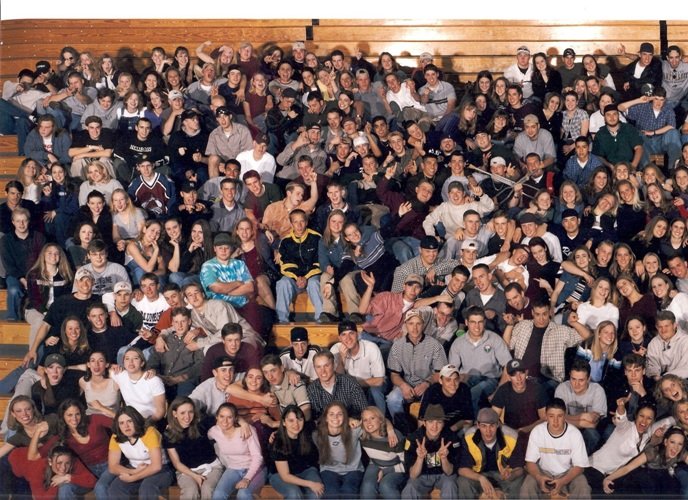 This is the Columbine High School Class of 1999. At the top left of the photo, pointing imaginary shotguns at the photographer, are Eric Harris and Dylan Klebold, who later massacred 13 fellow students and injured 24 others in the most horrific school shooting in the U.S. The pair later committed suicide together in the school’s library. 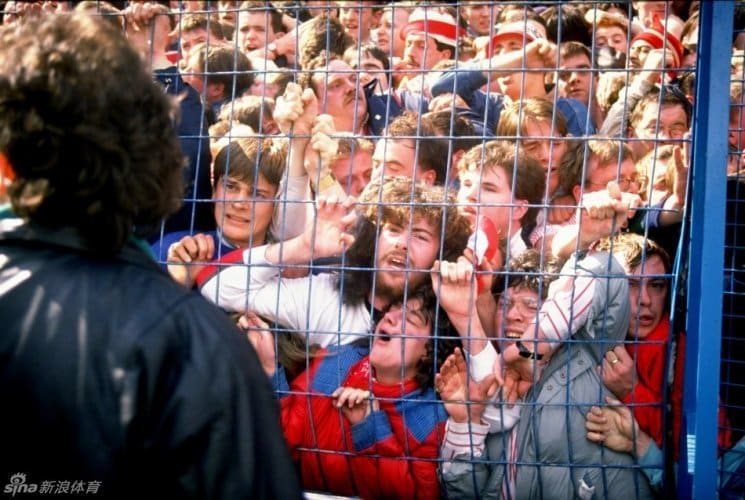 Over 96 fans were crushed to death and 700 more suffered injuries at the 1989 Liverpool vs. Nottingham Forest football match after eager fans late to the game rushed through the narrow tunnel, pressing the already crowded area in front of the fence. 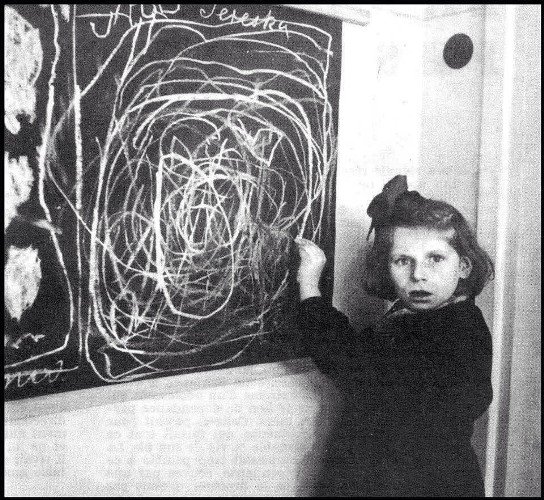 This Polish girl drew a picture of “Home” after having grown up in a concentration camp during World War II. 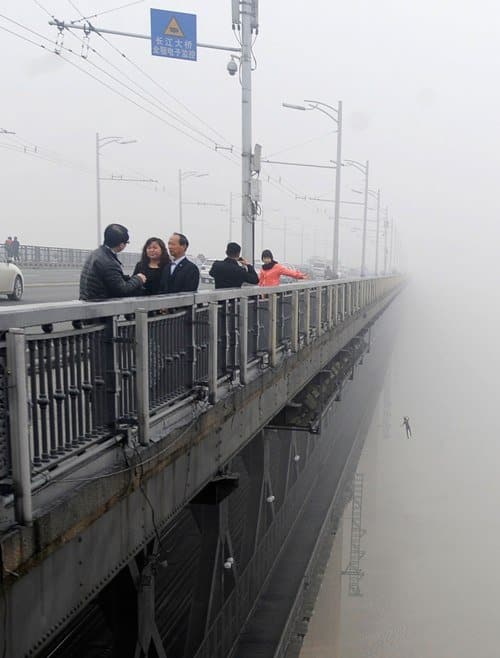 A photographer inadvertently captured the moment a person jumped to his death off a bridge in China. 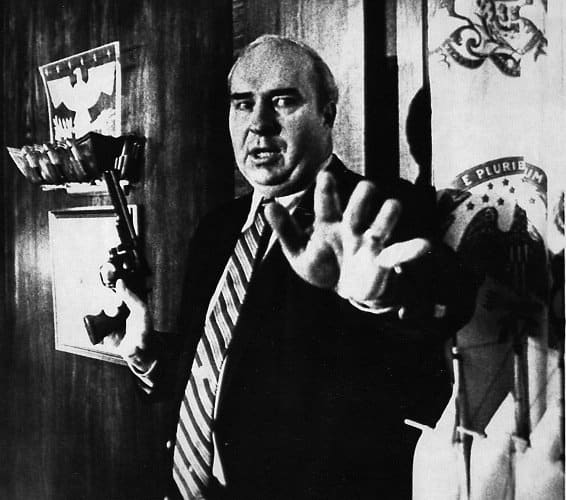 This photo of U.S. politician Robert Budd Dwyer was taken as he was warning everyone to stay back, just seconds before blowing his brains out on national television during a news conference. 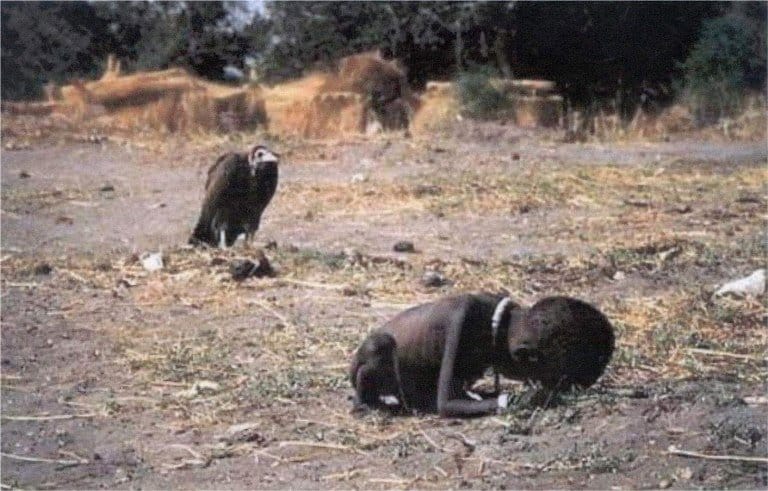 A starving child painfully crawls towards a United Nations feeding center in Sudan while a vulture patiently waits for its next meal to die. This photo won a Pulitzer Prize, but the photographer, Kevin Carter, committed suicide three months later, too overcome by the guilt of not having helped the emaciated little girl. 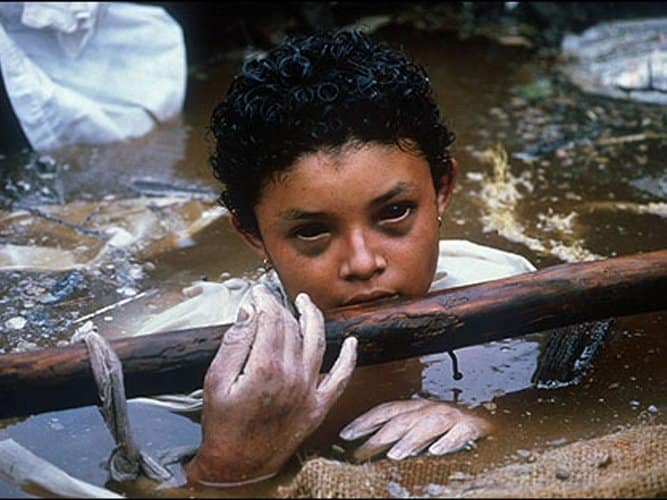 This is a picture of 13-year-old Omayra Sanchez Garzon who was trapped by debris in a landslide in Armero, Columbia after the Nevado del Ruiz volcano exploded in 1985. Despite rescue efforts, Omayra died after enduring 55 hours of being in neck-deep filthy water. 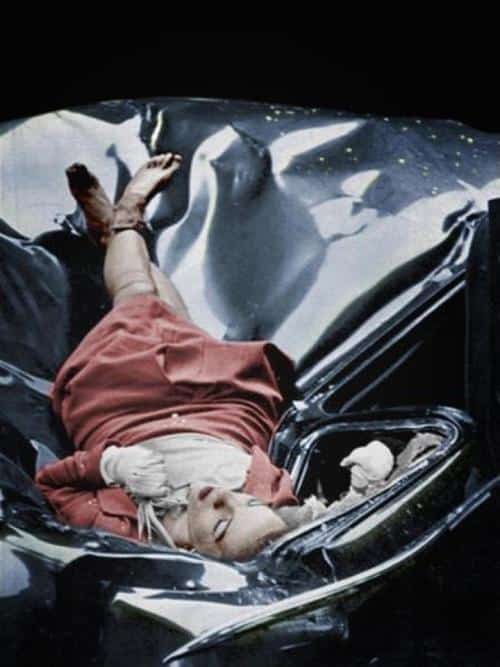 In 1947, Evelyn McHale wrote a tearful suicide note telling people she wasn’t good enough for her fiancé, or for anybody else for that matter, just before jumping off the top of the Empire State Building in New York and decimating a United Nations limousine parked below. 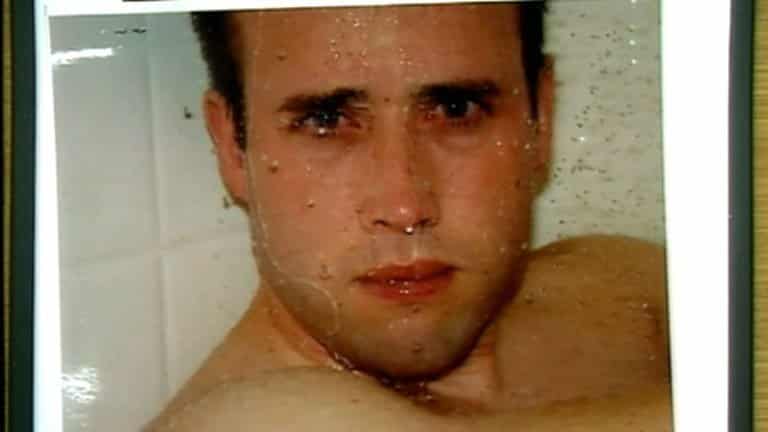 Jodi Arias took this photo of her ex-boyfriend, Travis Alexander, just before stabbing him multiple times and finishing him off with a gunshot to the head. 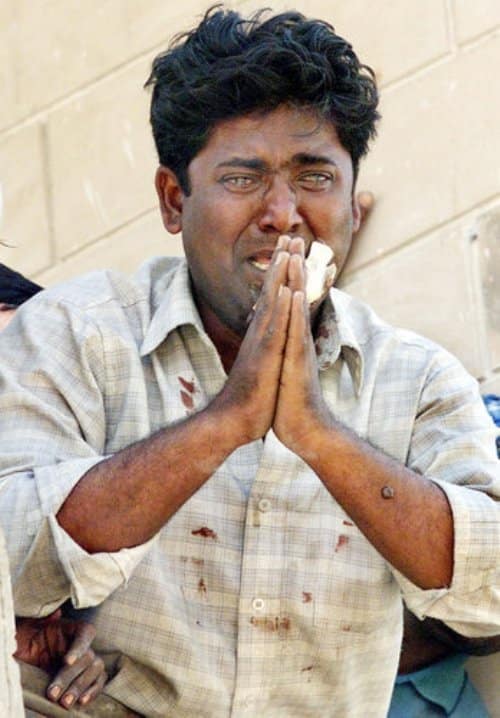 This is Muslim tailor, Qutubuddin Ansari in the midst of the 2002 Gujarat riots in India. A bloodied Ansari is begging for mercy during the violent series of feuds where Hindus and Muslims massacred each other. 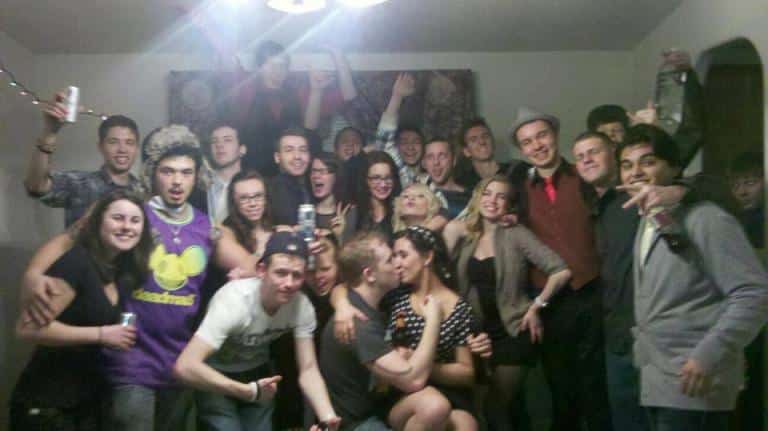 Everyone in this house party picture knew one another. Except for the glow-eyed person on the far right, who no one could identify, or remember as having been at the party at all. 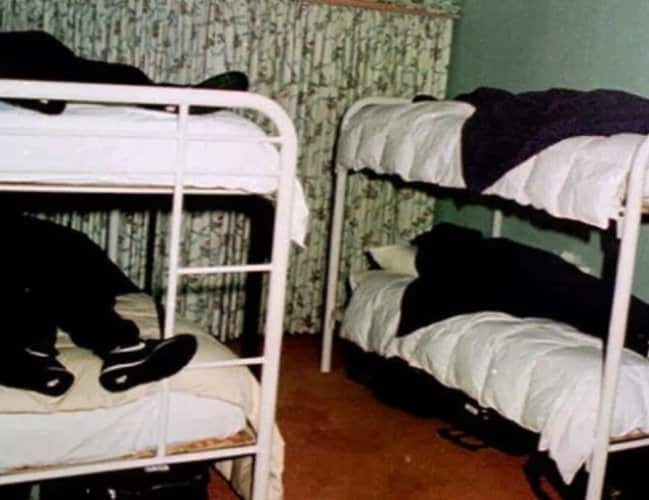 This photo was taken after cult members of the Heaven’s Gate Group committed mass suicide in 1997. They were all dressed alike in black outfits and Nike trainers, hoping to get aboard an alien spaceship after their deaths. 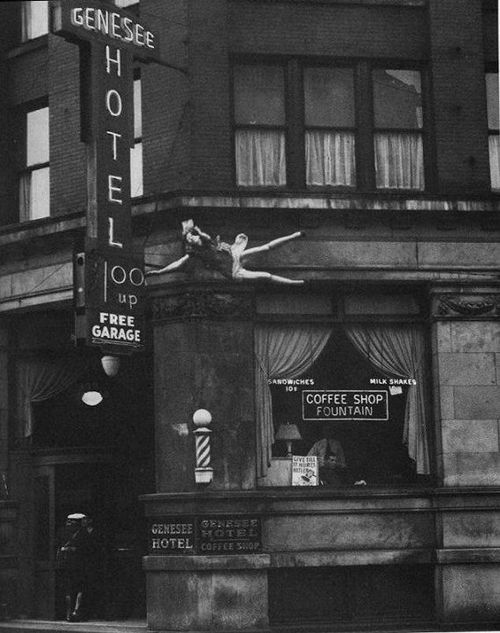 This was 35-year-old Mary Miller, who jumped from the eighth storey of the Genesee Hotel in New York in 1942. Strangely enough, nobody knew why she committed suicide as she left no note. 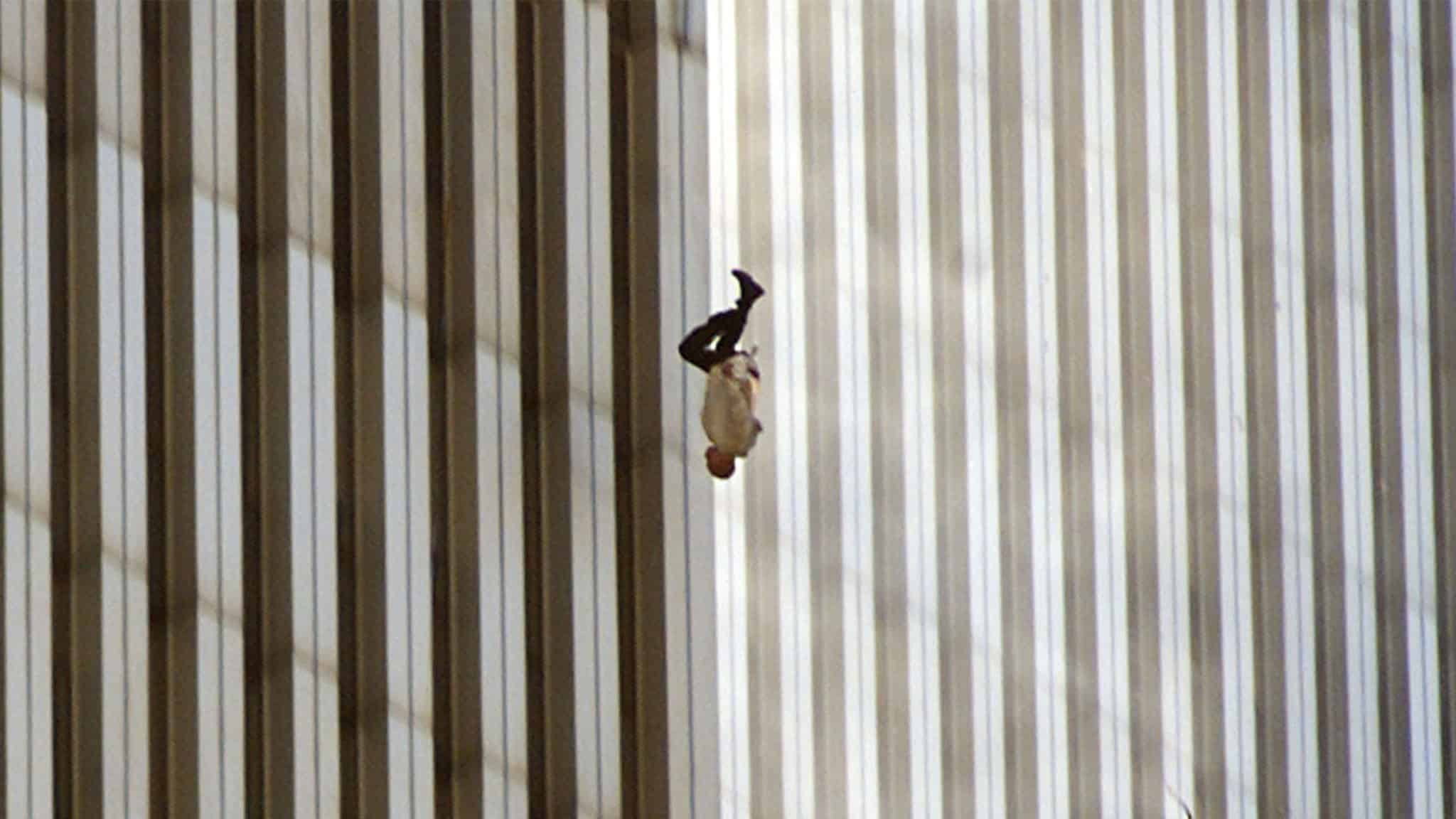 The Falling Man is highly regarded as the most iconic image of 9/11 terror. In the United States, people have taken pains to banish it from the record of September 11, 2001. He wasn’t the only victim who had to jump out of the windows, but he was the symbol of all the innocent and desperate people who lost their lives in the 9/11 attacks.