Possibly one of the greatest animal rescues ever!

Bears are notoriously difficult and temperamental creatures. In the wild, humans are advised to stay clear of them. Especially when they’re hungry.

Except for one man who risked his life to save a famished, cranky and semi-tranquilized black bear from drowning in the Gulf of Mexico.

This particular black bear had wandered out of his Osceola National Forest home in Alligator Point, Florida in search of food.

All 400 starving pounds of ursine found himself in a residential area where he started searching through the garbage.

Because human leavings always taste better than bugs and honey. 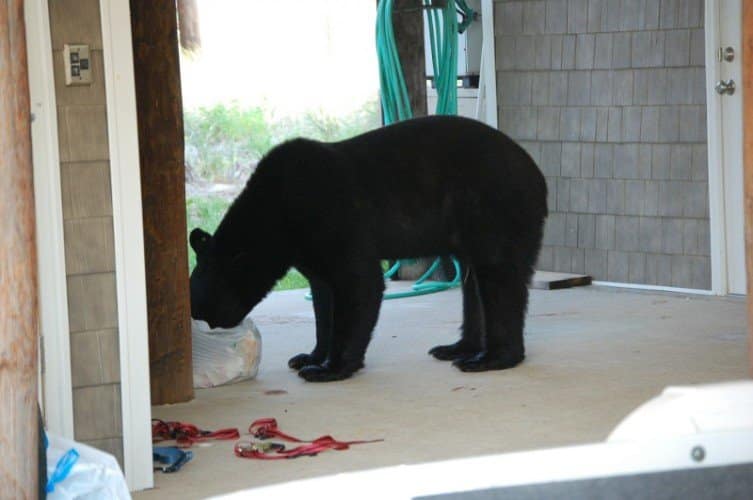 Residents called wildlife authorities who promptly arrived to capture the bear and return him into the forest.

Things started to go terribly wrong, however, when they shot the bear with a tranquilizer gun.

Smokey took a hit but continued running for dear life. 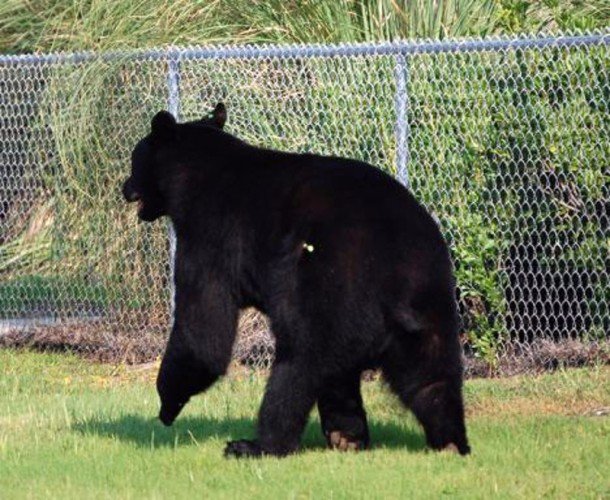 Instead of cooperating and falling into a faint, the bear ran off instead. All the way to the ocean’s edge where he jumped in.

Almost like he was starting off on the first leg of an ultra-marathon. 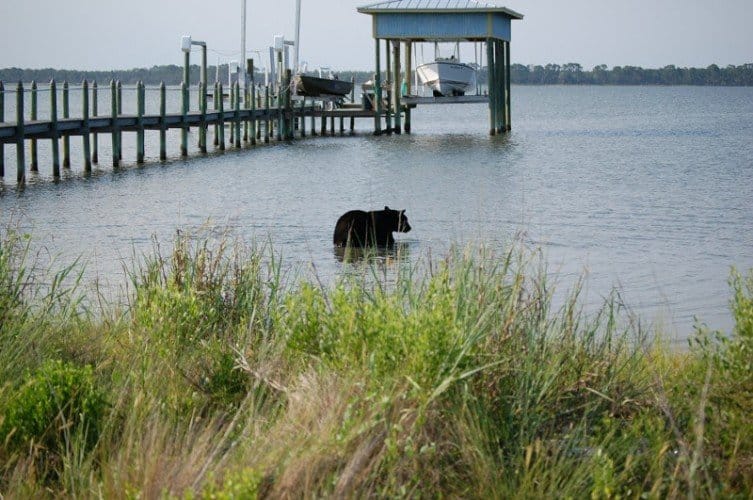 Unfortunately, just as he was swimming to escape, the tranquilizers kicked in, and the bear started drowning as drowsiness overcame him.

Enter Adam Warwick, a biologist working for the Wildlife Commission. A brawny man himself, Adam wasted no time in jumping in after the drowning bear. 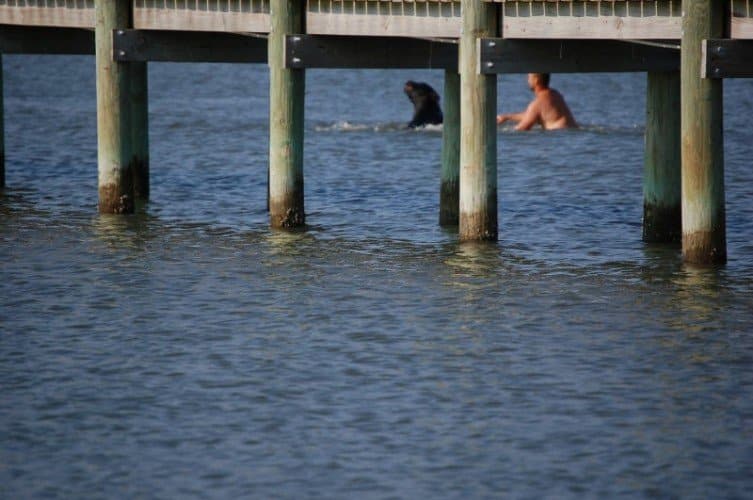 As with all drowning creatures, the bear tried to save itself by crawling up on Adam, nearly sending him under.

The overwhelmed human and the gasping, floundering bear. 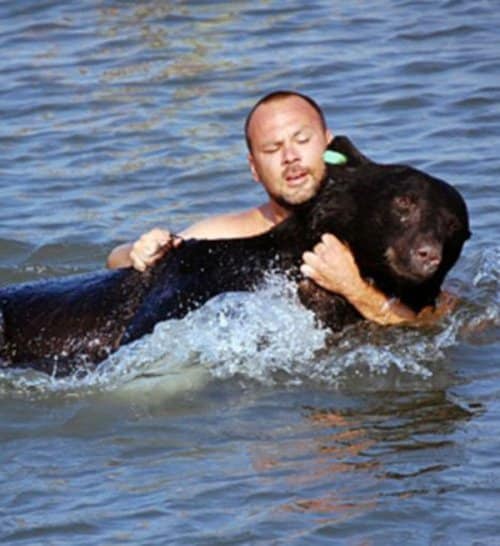 Still, Adam kept his calm and continued to drag the ursine to land. All the while, the black bear was losing more feeling in its limbs and struggling to keep its head above water.

Which meant Adam was lugging 400 pounds through water. All. By. Himself. 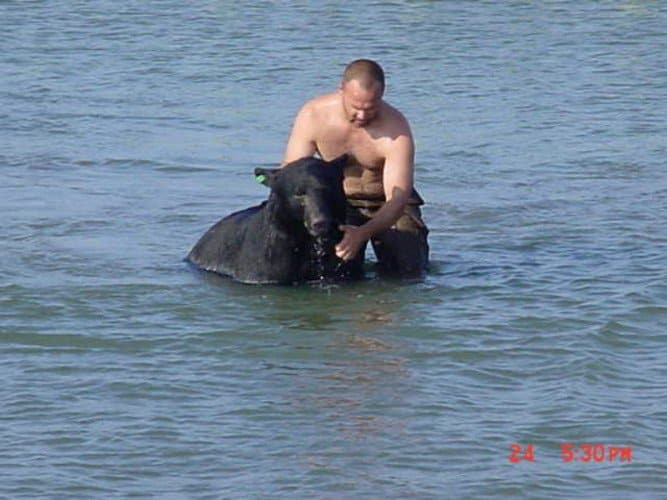 Fortunately, both man and exhausted, nearly unconscious bear made their way to shore, where they were hoisted back to land.

Back on terra firma, the rest of the Wildlife Commission crew found the bear so heavy they had to use a tractor to move the now completely sedated animal to the transport vehicle. 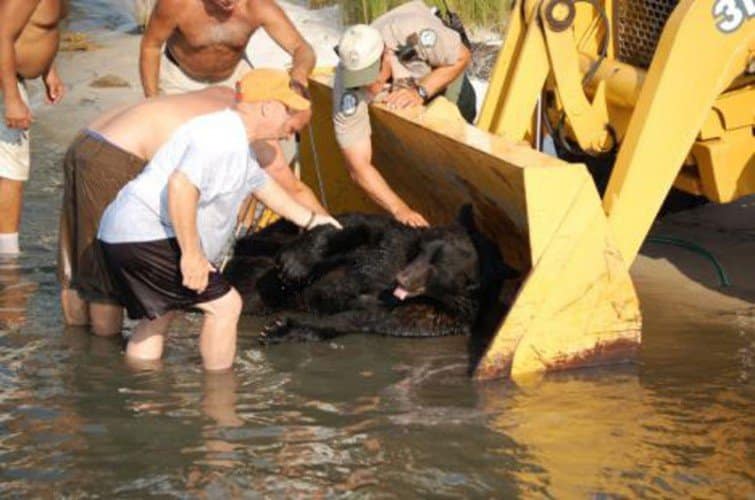 Eventually, they returned ol’ Smokey back to the Osceola National Forest where he appeared much happier to be back.

If he wasn’t in such a hurry to run off, he would’ve given Adam a big bear hug for saving his life, too. 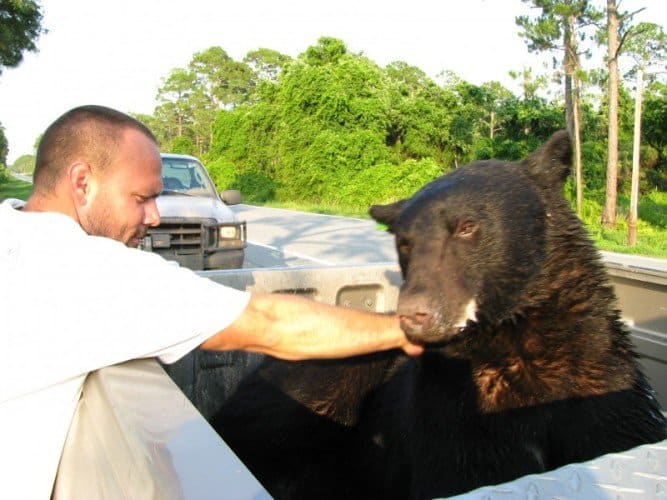