This short video shows us that bizarre moment when a cat tries to fight it out with a snake being eaten by a frog. Sounds strange, you say? Well that’s exactly what we’ll all see below.

The video has been making the rounds on social media after it was posted by NTD Television on their Facebook page. It is safe to say that, yes, netizens are pretty amazed with it as it immediately generated numerous views, comments, and shares.

We tried to dig deeper and get more information about the weird footage and apparently, we’ve learned that the unusual standoff happened in Thailand. A group of bystanders, who were filming the fight, can be heard in the background as they watched the cat approach the snake – while the frog, with the serpent in its mouth, just sat there comfortably.

This is definitely not something you see everyday! 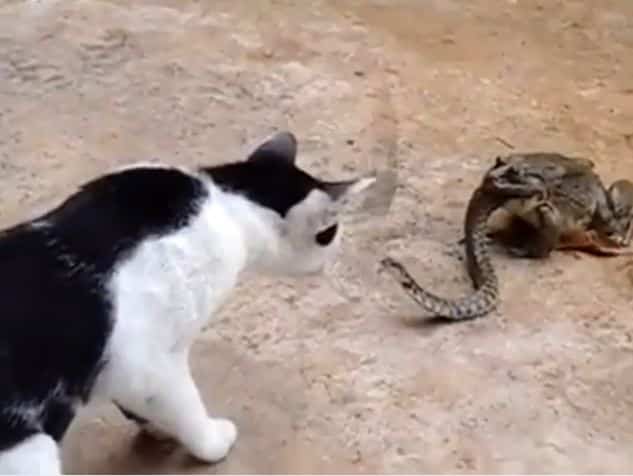 I mean, you know, when did frogs start eating snakes anyway? Are frogs that deadly now? Also, why isn’t the snake even trying to break free from the frog’s mouth?

Eventually, we see the frog hopping away from the cat, as if trying to hog the food for itself.

We can only wish we can see more and find out what happened next but that’s just really what we have so far.

This, of course, isn’t exactly the first time we see a snake caught in the middle of an odd battle. In the past, we’ve posted about that time when a serpent fought with a spider – and the arachnid actually won! Also, we have had that report about a venomous sea snake that had a match with a deadly stone fish. Unfortunately, both of those ones didn’t end well for the serpents concerned.