North Korea has always been an enigma – it is a territory shrouded with mysteries and is filled with harrowing tales of hunger, suffering, and fear. Yet the country’s citizens hail its ruler and look up to him as if he’s the Messiah who will save them from all the darkness in the world.

One village in North Korea seems to beat all the other places in the country when it comes to its mysterious nature. Located in the Demilitarized Zone (DMZ) on the border between North and South Korea is the town of Kijong-dong, also known as the Peace Village. It is visible from South Korea and appears just like a normal, quiet village. The North Korean government claims that about 200 people live in the village and that it has the facilities required to support its residents; the small town even has schools and a hospital. When you look at it, it will truly give you the impression that North Korea maybe isn’t really as bad as people say it is.

The only problem is that, when you look more closely, you will realize that nobody actually lives there. Yep. Zero. Nil. Nada.

No one appears to live in North Korea's Peace Village. 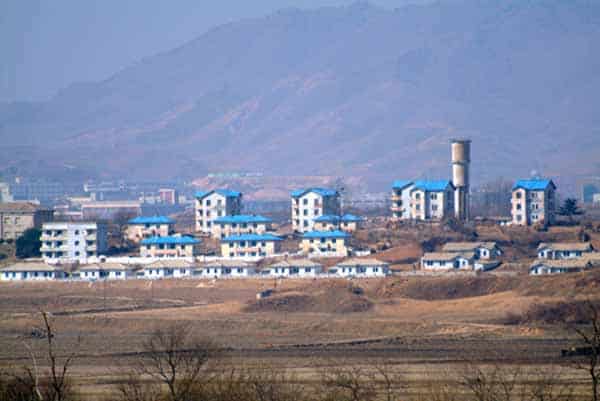 Peace Village, apparently, is a fake town. In fact, it is called the “Propaganda Village” and is believed to have been built to lure defectors from the country’s southern counterpart. Its concrete buildings and houses are mere shells and are devoid of fixtures normally found in a residential home. There are no interior rooms and windows have no glasses. Lights are turned on and off at specific times. The only sign of human activity noted in the village is the occasional sweeping of the empty sidewalks by a few caretakers.

Mounted in several buildings in the Peace Village are enormous speakers that continuously broadcast North Korean propaganda to the South. Its original goal of luring defectors in later turned into a condemnation of the West, broadcasting hateful anti-Western speeches, Communist opera, and marching music for up to 20 hours a day.

Kijong-dong is located on the northern side of Korea's Demilitarized Zone (DMZ).

Probably, the only way to confirm that the Peace Village is indeed fake is to actually see the place with our own eyes. But that seems impossible, well, that is beside the fact that entering the North Korean territory isn’t a very appealing thought, either.

However, despite not actually seeing the place, it seems that Peace Village hardly fools anyone.

Watch this video and see for yourself:

Really, this is a perfect example of going too far to keep up appearances.