Last month, Mark Zuckerberg and Priscilla Chan made headlines as they celebrated the birth of Max, their first daughter.

We featured that news here in our site and according to what we’ve gathered, the couple have decided to donate 99% of their Facebook shares (that’s a whooping $45 billion) to the Chan Zuckerberg Initiative – their own charitable foundation which aims to “advance human potential and promote equality in areas such as health, education, scientific research and energy.”

So yes, the Zuckerbergs are giving away a huge amount of money but make no mistake about it – they’re not giving it to Facebook users sharing that viral “thank you” message.

Here’s what Mark originally posted on his page: 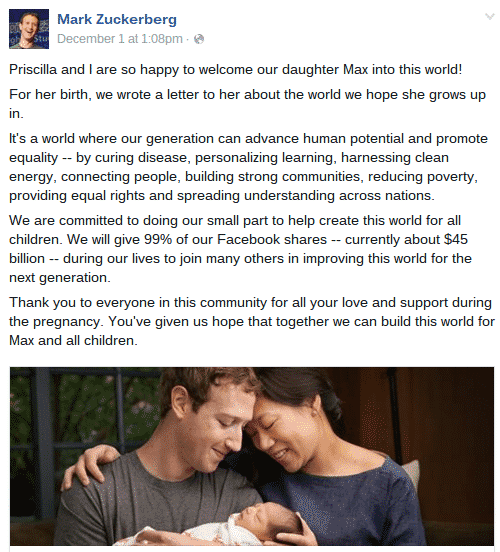 Recently, however, some people on Facebook have been copying and pasting this as their status: 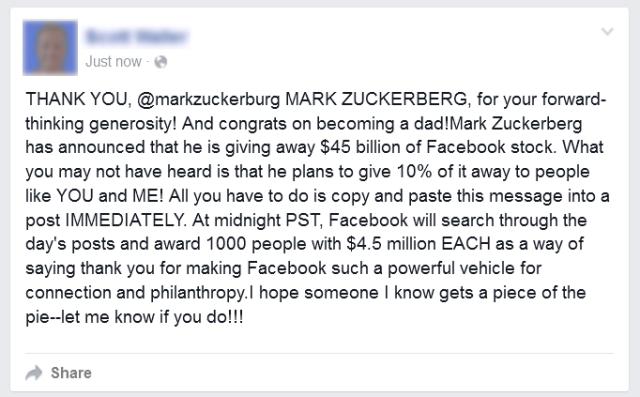 And that’s just one of the many variations.

Some are even claiming that they heard about it from Good Morning America or some other source.

Understandably, a lot of netizens over at the popular social networking site got fooled by it and so the hoax quickly went viral.

Snopes, a website that debunks urban legends and internet rumors, recently posted this:

While Zuckerberg hasn’t said exactly who will benefit from his philanthropy, the message claiming that random Facebook users can grab $4.5 million by simply liking a post on the social network site did not originate with the Facebook founder.

Mark Zuckerberg does want to help the world, but when it comes to something that seems too good to be true, it usually is. That is what can be said for the current Facebook hoax going around right now that states you can get millions for sharing a status update.

Sorry to ruin your hopes of being a millionaire this 2016 but yes, you’ve just been fooled by a hoax.