A viral video shows an unsuspecting tourist sitting down to take a photo with a female long-tailed macaque who sat on her lap. The woman was caught off guard when a male monkey suddenly came and humped his mate, not minding that they were sitting on her.

The woman, who was visiting the Sangeh Monkey Forest in Bali, Indonesia, didn’t know what to do and was left red-faced after the monkey’s amorous encounter.

The tourist sat and let a female monkey sit on her lap. 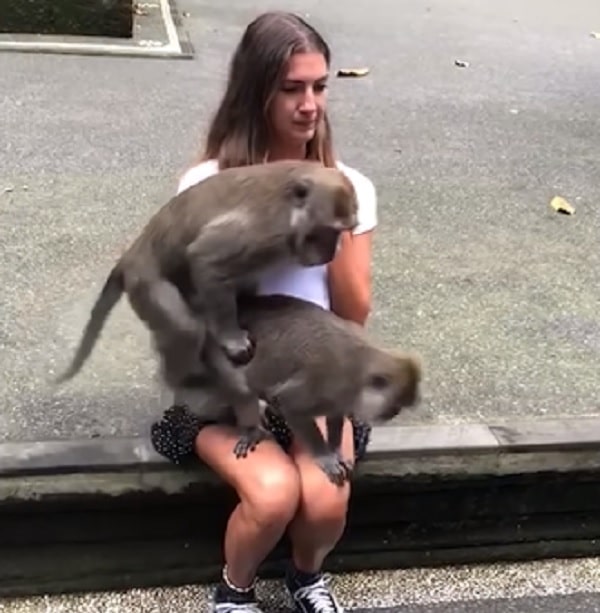 She shrieked and covered her face in embarrassment.

She sat there and was left in complete shock as her friends burst in laughter.

The male monkey continued to thrust back and forth until a tourist guide nearby shooed them away with food. The mortified woman was left in shock but with a memorable encounter in her trip to tell her friends.

The tourist will surely remember the encounter forever.

The Sangeh Monkey Forest is a 14-hectare forest that’s home to about 700 monkeys. The gray long-tailed macaques (Macaca fascicularis) are considered sacred animals.

The gray long-tailed macaques are sacred animals for the people of Bali. 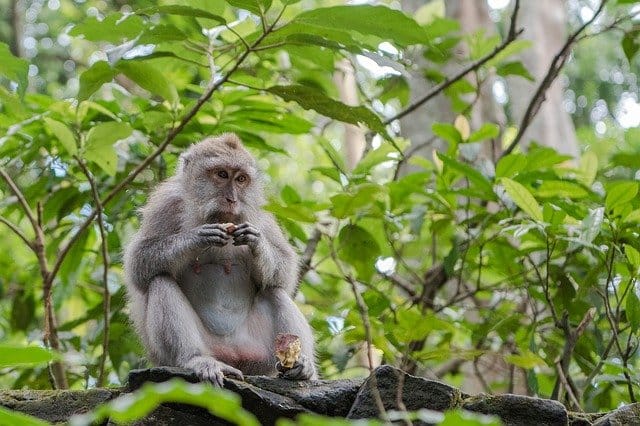 Sangeh Monkey Forest is the first monkey forest that’s been open to the public as an attraction. Visitors can explore the forest daily and have a close encounter with the playful primates.

A similar incident happened two years ago in Bali, Indonesia. An American tourist was also surprised to have two monkeys jump on to the man’s back and started thrusting while the female monkey held his head. The shocking and hilarious encounter was also captured in a video and it went viral.

In Thailand, a teasing monkey pulled the top of a tourist. Fortunately, the woman was fast enough to hold her top, preventing an embarrassing event that might have been captured in a video.

If you encounter a similar incident, remember that monkeys are naturally naughty and playful animals. They’re not bothered about their surroundings and do anything they want. You might as well let them be unless they’ve become a threat to your safety.