Between Borneo and the Maluku Islands is an oddly-shaped body of land resembling an open-mouth crocodile with legs. This is Sulawesi, the world’s eleventh largest island within Indonesia’s jurisdiction.

Right smack in the middle of Sulawesi lies the Lore Lindu National Park in Bada Valley. It boasts some of the most unusual prehistoric statues that defy explanation. Carved out of stone, these megaliths have straight bodies, gigantic heads, and round eyes underneath straight overhanging brows.

Humongous head half buried in a field. 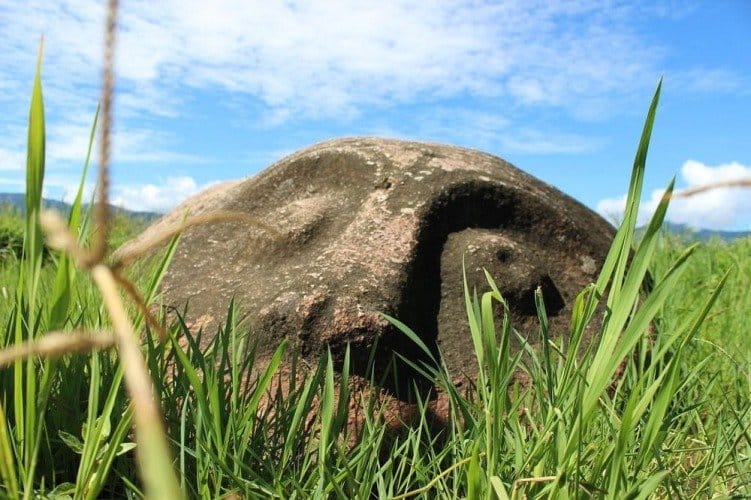 Hundreds of these statues dot the protected forests of the park, giving rise to a mystery no one has yet answered. They resemble Easter Island’s Moai megaliths in the southeastern Pacific Ocean. Though how this similarity of statues on islands continents apart and separated by over 14,000 kilometers of ocean remains mind-boggling.

What are these statues? 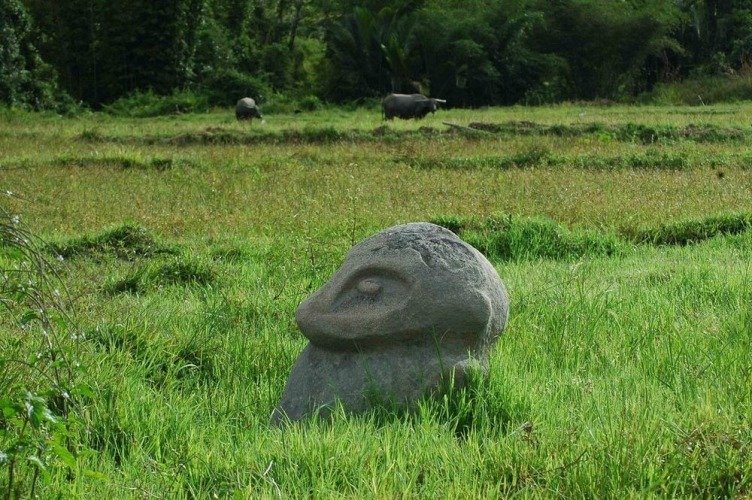 Who carved them, and when? Like the Easter Island statues, there is no trace of the culture that created them. Neither are there remains of any settlements or society that may have been responsible for the carvings. 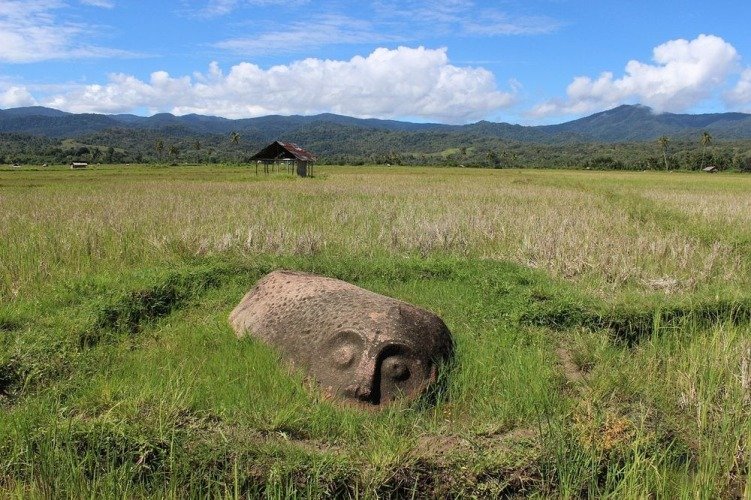 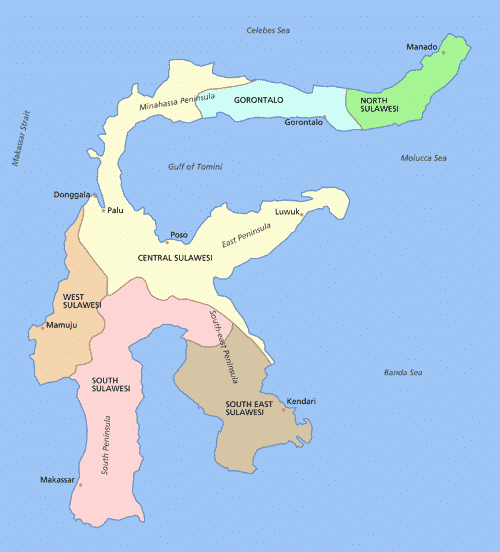 Discovered centuries before Europeans set foot on Sulawesi, the megaliths are estimated to be between 1,000 to 5,000 years old. Over four hundred of these carved megaliths rest haphazardly in fields and rivers. Only thirty or so are human-shaped and are identified by their genitals.

This pair is clearly a couple. 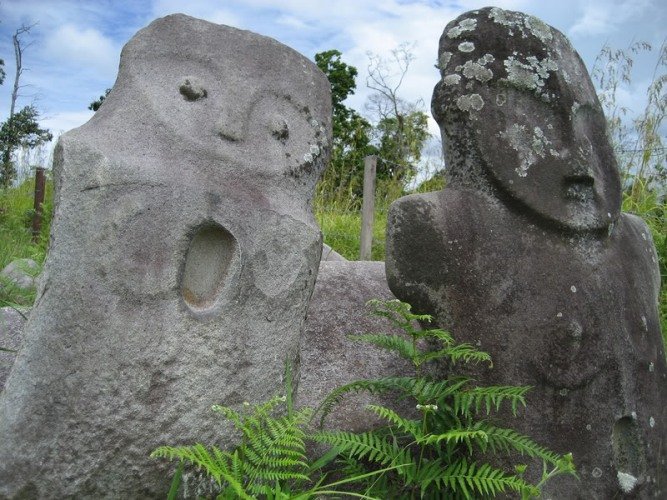 No one knows their purpose but locals have built legends, stories and personalities around these megaliths in an effort to explain their existence.

There is Palindo, the Entertainer. At four meters tall, he is the largest of the statutes. He is said to have been a court jester and his post is situated facing the king’s ancient palace. 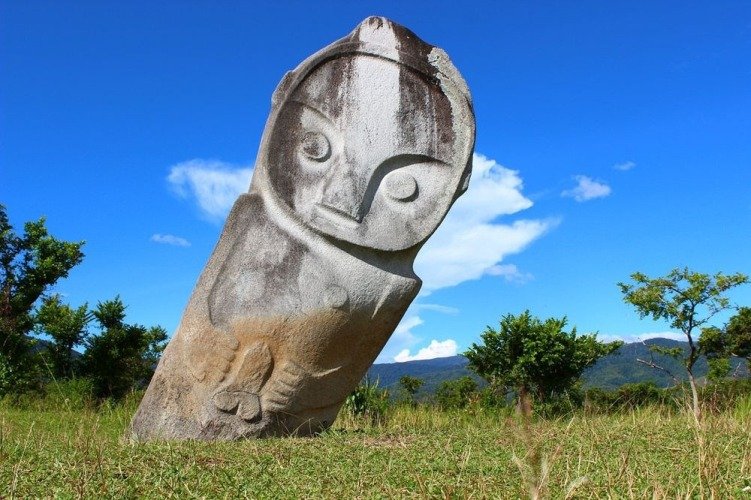 Leaning to one side, Palindo’s stance is said to have been caused by warring tribes who disturbed his serenity.

There is Langke Bulawa, the Golden Bracelet, a female figure standing 1.8 meters tall.

Looking both demure and menacing at the same time. 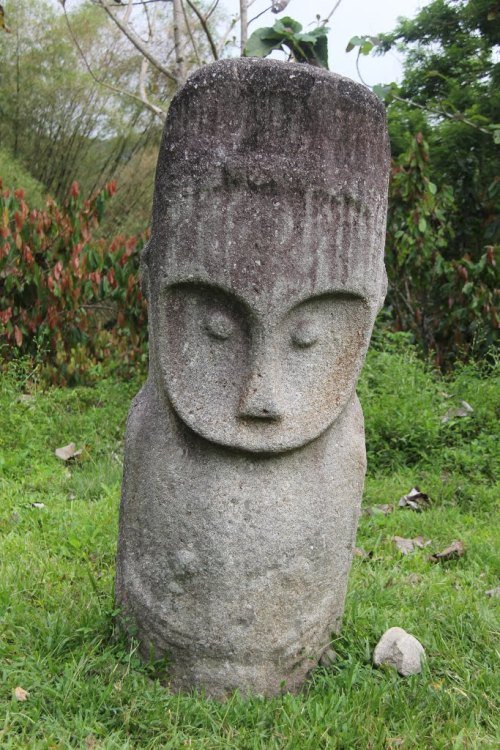 Tokala’ea, who was turned to stone to atone for his sins as a rapist, sports deep cut marks said to be scars from knives.

He does look quite remorseful. 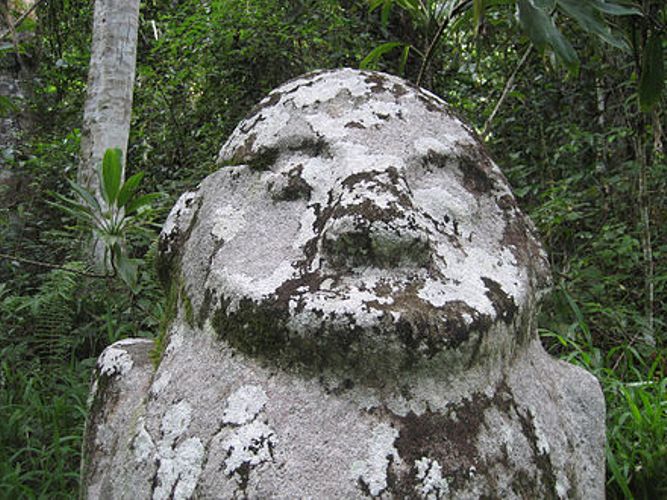 Tadulako, on the other hand, was a former village protector punished to spend eternity as a granite statue for the sin of stealing rice. 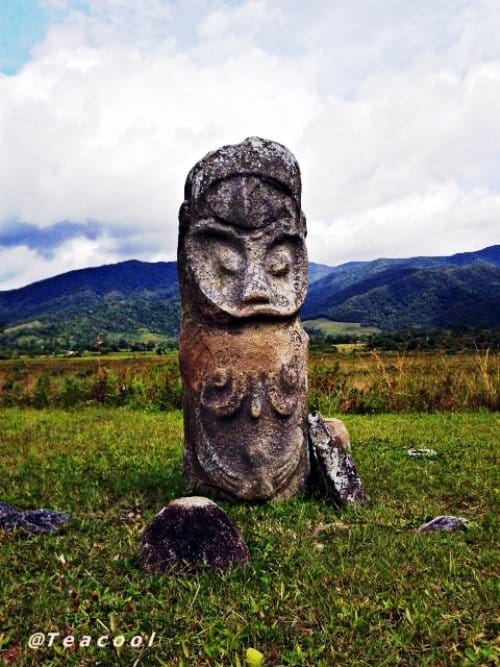 Some of the other megaliths resemble circular pots and cisterns. The locals call them kalambas, or bathtubs used by kings.

A bath fit for a titan. 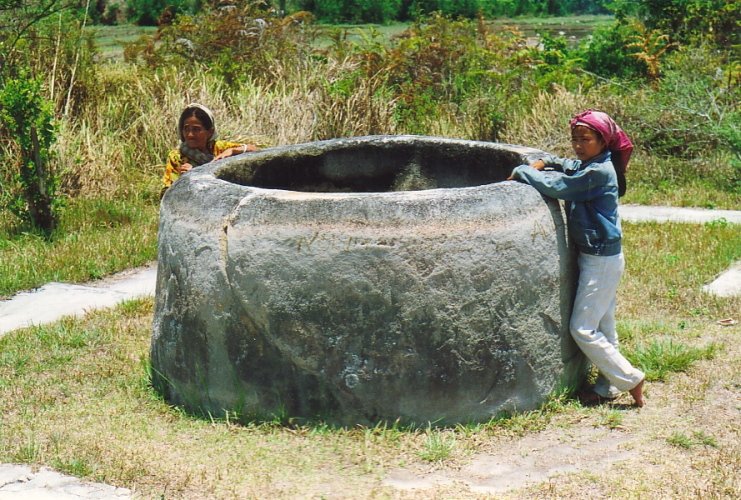 These kalambas may have served their purpose to store grain for the ancient civilization that carved them, as some of these megaliths have heavy lids. They are accompanied by Tutu’na, or stone plates with cavities which may have been used to grind food. 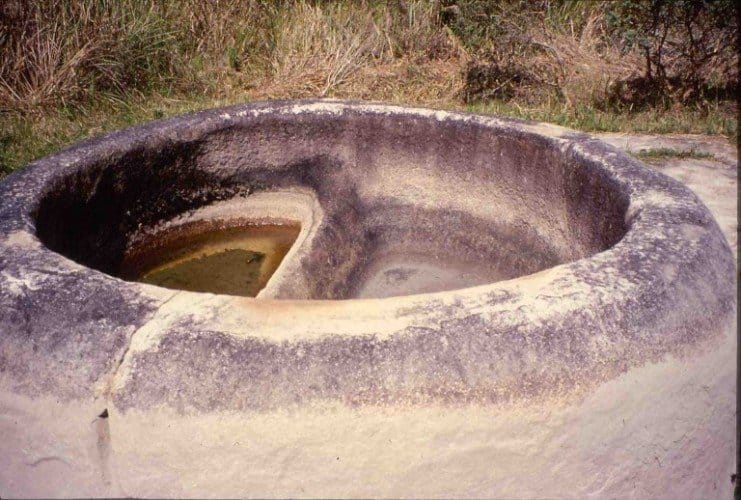 Other lower stone tablets could have been used as altars. 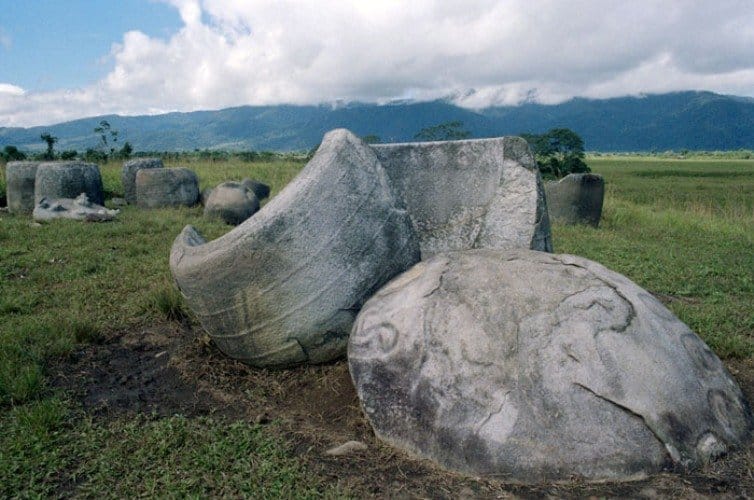 These minimalist carvings continue to remain a mystery, and their presence in Sulawesi only serves to add to the island’s lore.