Before you start reading what we have in store for you, we’d like to remind you, especially kids and adults who think like kids, not to try this stunt at home, in the zoo, or in any place where there is an alligator.

Guess we couldn’t emphasize it enough, huh? So on with the story.

Jason McDonald, a 35-year-old ranger at the Colorado Gators Reptile Park, wore a T-rex costume to tease and taunt a 500-pound alligator named Morris with fish. Fortunately, Morris is a celebrity used to interacting with humans. Yep, you read that right. Morris the Alligator is a movie star that has appeared in films such as Dr. DoLittle and Happy Gilmore.

When asked why he was taunting the poor gator, he clarified that he was not and was only making Morris work for his food because he was getting a bit “chunky.”

McDonald wears a T-rex costume to get Morris worked up. 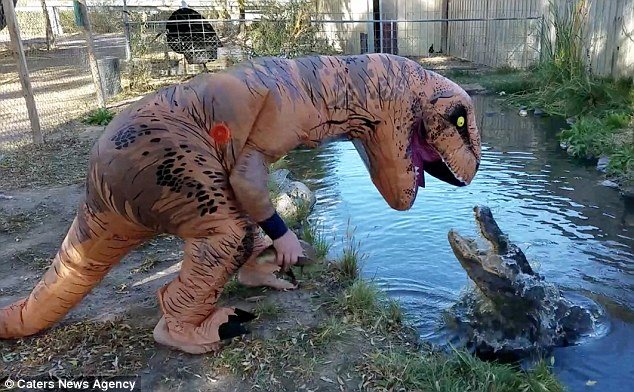 “I know it looks like we are teasing him, but he’s a chunky alligator so we make him work for his food to burn some calories.”

“I was feeling nervous and it’s not very easy to see in the costume because it gets foggy from breathing on it.”

The 'chunky' alligator needs to work for his meal. 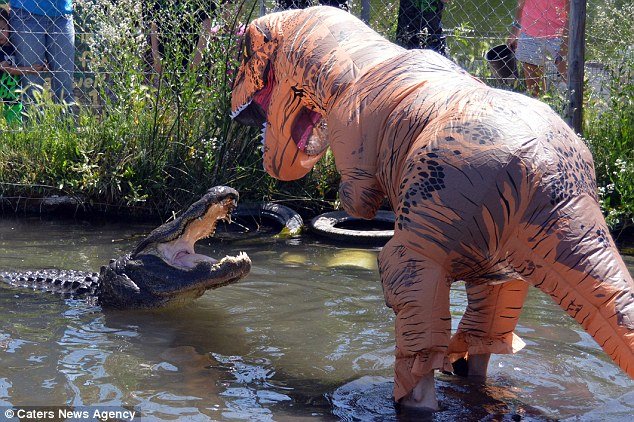 McDonald couldn't see very well from inside the costume. 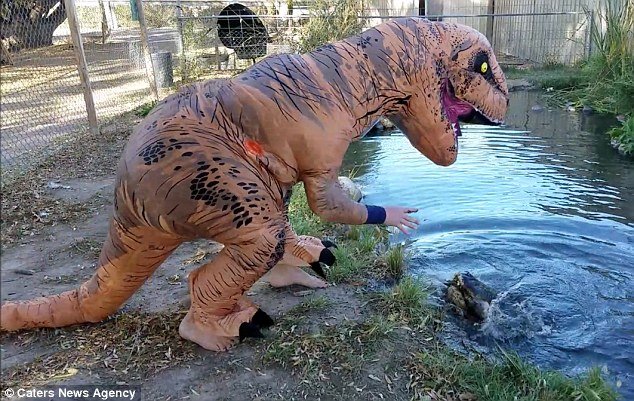 “It’s insanely hard to feed the gators in it – you can’t see very well and I can’t extend my arm out all the way to get more distance.”

“I have quick reflexes but if the gator was to come all the way out of the water and chase me I’d have a bad day.”

Well, at least McDonald seemed to know what he was doing. But still, it’s dangerous. Maybe a treadmill for alligators would be a better idea. Or not.