They say that those who have less, give more. This statement was proven to be a fact by a Brazilian college student who had a brief but unforgettable encounter with an unexpectedly generous man.

Caroline Santana is a college student from São Paulo, Brazil. On her way home one night, she had a meeting with a man that touched her as well as many people as she shared their story.

While on her way to the bus station, a homeless man approached her. The man proceeded to ask for spare change from her. Caroline looked in her bag to find some money to give to the poor man but to her surprise, she found out that she had lost her purse as well as her bus pass.

Caroline was saddened about what happened and promised the man to give him spare change if she got any. She also told him that because of this she’d have to walk all the way to her home. The man, then, without any hesitation, asked her:

“Do you know how much is the ticket? Because I have $4 and I’ll be happy to give it to you.”

She was amazed at the man’s generosity despite his own condition but Caroline declined the man’s offer. She said that the man kept on insisting she take the change: ” “Are you sure you don’t need it? You don’t have to walk back home.”

Fortunately, moments later, she was able to find her bus pass so she did not need the man’s change anymore.

However, she was left stunned by the man’s selflessness considering that that could be all he had yet he was still willing to give it to someone who might need it more. She asked to have a picture with the man, who she found out was named Cesar. Caroline wanted to show everyone how big Cesar’s heart is.

Cesar made an effort to look his best in the photo by fixing up his appearance.

Caroline and Cesar posing for a picture together 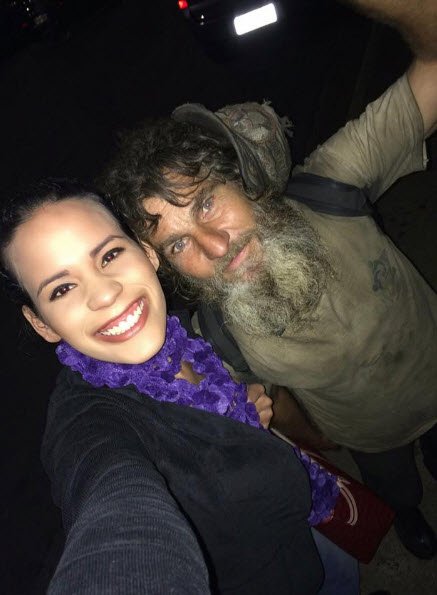 Caroline also gave him R$2, which was also all she had to thank him for his good heart.

People like Cesar teach us an important lesson, of character, humility, wisdom and love.