Being approached by someone selling packets of tissue is a normal everyday event. Even though we don’t need it most of the time, we ended up buying it to help the seller, especially when they are old and disabled.

There are so many scammers these days that it is sometimes difficult to discern which people actually need help and which ones are just pretending to be sick to get your sympathy (and money). While scammers are everywhere, it is quite unfair to doubt all sellers to be one. 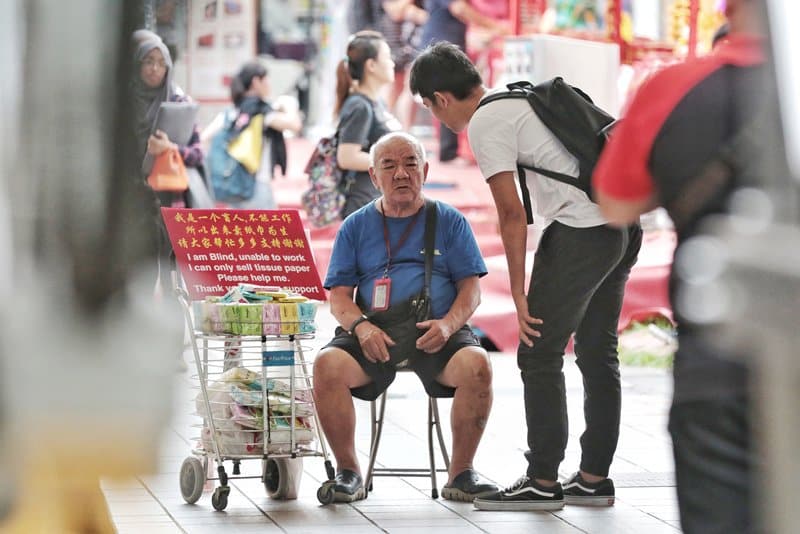 Liu Zhen Xian has a board telling people walking past that he’s blind, and he’s selling tissue to make a living because he has no other choice.

“I am blind and unable to work. I can only sell tissue paper. Please help me. Thank you for your support.”

However, he is now being called a scammer by netizens after he was caught reading a newspaper.

A lot of people were initially more than willing to help the 72-year-old man, but they suddenly changed their minds after he was caught reading a newspaper. Many then doubted that the Liu Zhen Xian was nothing but a liar and a scammer.

While it appears that way, Liu Zhen Xian didn’t lie when he said he was blind. So how on earth did he get the ability to read a newspaper when he’s blind, you ask? You see, the old man is completely blind in his right eye, and his left is visually-impaired. To prove his claim, he has an official ID from the Singapore Association of the Visually Handicap

He explained that his right eye was injured by a marble back in his 20s while his left is deteriorating due to age.

Despite having difficulties reading, Liu Zhen Xian still persists in his long-time habit of reading newspapers despite his poor eyesight.

After learning that the public thought he was scamming them, he got really upset about the accusations.