This check will surely leave a server or group of servers with fat wallets and huge smiles after work! Apparently, the do-gooder took the “Parable of the Good Samaritan” to the most profound place of his/ her heart.

The Good Samaritan is believed to be behind the “Tips for Jesus” an Instagram account that show posts of different acts of kindness to the humanity. In their previous posts, followers of the account has seen several number of checks issued as tips to restaurants in insanely high amounts. Earlier this week, the anonymous tipper left an enormous $2,000 tip on a $50 bill after dining at a Tacolicious in San Francisco, California.

Regardless of who is behind “Tips for Jesus”, the anonymous tipper definitely made the new year of that server even happier. Apart from paying the $50.74 bill, the diner left the server of the San Francisco restaurant with a whopping $2,000 tip. The picture of the receipt was then found posted on Instagram which was confirmed to the San Francisco Chronicle as real by the staff member of Tacolicious. 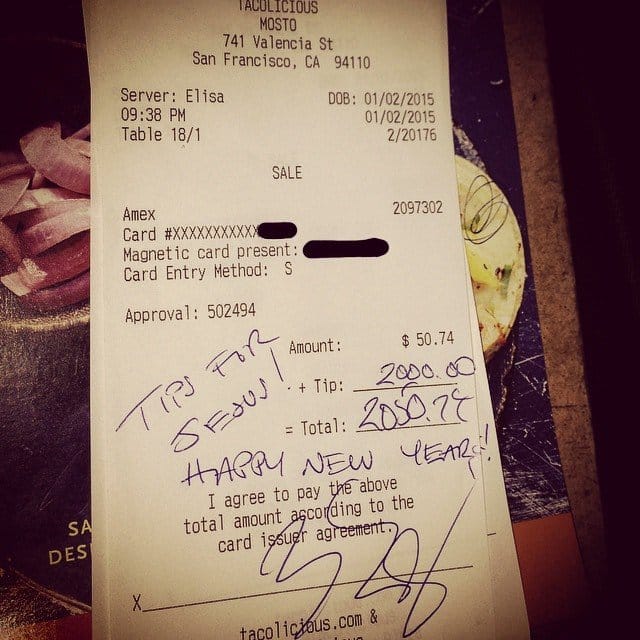 The Good Samaritan behind the huge, generous tips remained nameless but SFGate speculated that the leader of the group of hefty tippers is Jack Selby, the former PayPal Vice President. As of the moment, this speculation is unconfirmed because no one stepped into the light to reveal the person behind the enormous tips.

Although the anonymous tipper permitted to be interviewed by San Francisco Magazine in February 2014, the publication maintained the anonymity of the generous diner. In the interview, he revealed that he is involved in the movement of about 10-plus diners. The act of tipping hefty tips is not related to any religion rather serve as an inspiring undertaking that aims to motivate people to be generous to others.

Since the creation of Tips for Jesus on Instagram in September 2013, the Good Samaritan has left more than $150,000 tips to unsuspecting servers in numerous restaurants across the US and Mexico. This includes the jaw-dropping $10,000 tip given by the kind-hearted stranger on an $89.89 bill at restaurant in Crudo, Phoenix on December 27, 2014.