Many women daydream about how their boyfriend would propose to them. Often, the mere idea of a proposal is enough to excite them. On the other hand, many men worry about making a marriage proposal as they want it to be unique, creative, intimate, and special. They may feel pressured as they want to give the best proposal, which subsequently can be very expensive. But still, a man decides the type of proposal, as some may want a simple one while others may opt for extravagance.

The big question then is this: What makes a good proposal? Regardless of the way a man proposes, what is important is that he thought and planned well for the event to ensure that the moment will be special for the both of them. Hence, we can say that it is also important for men to know their partner well so they can pull it off and make everything memorable!

A study revealed that one in three women would be disappointed if a man does not put a significant effort for the wedding proposal, as many women prefer a surprise or a huge effort than a man just simply going down on one knee and popping up the big question.

Today, men have thought of several unique ways of proposing to their girlfriends, and the effort and creativity of their proposal made things more touching and lovely!

Oli Famoudun, a 34-year-old man from Essex, planned a very creative way of proposing to his girlfriend of three years. In the video, he rented the entire Gillray’s steak house for his special plan. He disguised himself as a waiter by putting prosthetic nose, beard, wig, and eye glasses so his girlfriend, Yemisi, won’t be able to recognize him.

Watch how Oli surprised Yemisi with a glass of water, a flash mob, and a serenade:

Oli knelt down and declared his love for Yemisi with heartfelt emotions:

“You know how much I love, I’ve always loved you.
You’re such a wonderful, beautiful, caring girl. You’ve been there for me through hard times. Will you marry me?’

As she accepted his proposal, people applauded and were touched by the moment. Well, who wouldn’t be?

Yemisi had no idea that the flash mob and the waiter incident was part of the proposal. She also didn’t notice that the entire restaurant was closed privately for her boyfriend’s little plot. 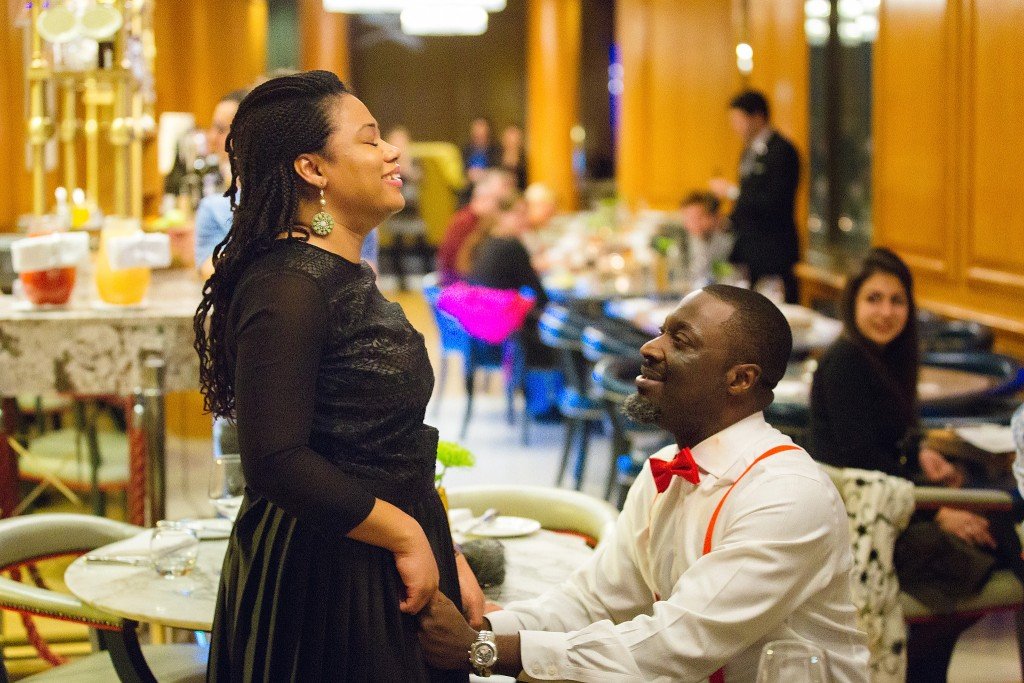 What can you say about his effort? Did you love it? Share with us your experiences and ideas about marriage proposal!

Also, don’t forget to SHARE this story with your friends. Who knows, you might just help someone who is planning to propose!