I’m not a vegetarian; I love burgers, steaks, and other sumptuous meat dishes just like any other person. But, every time I see a herd being led to an abattoir, I want to convert and start eating nothing but vegetables. I usually feel this way whenever I look at those animals’ eyes and whenever I hear them squeal in pain or probably in fear.

Thanks to our mothers and all the great cooks around the world, animal products are transformed into a delicious dish that makes us forget, somehow, that they were once alive. The meat that comes from these animals becomes a person’s succulent meal.

However, there are people who love eating raw foods. The Japanese want their sushi fresh and some people like their steaks rare. How “rare” and fresh may I ask?

A Filipino named Jaime Tolentino witnessed a freaky episode that occurred in a public market in Tagaytay last 2013.

A huge slab of meat twitched for three minutes despite having been cut and skinned! 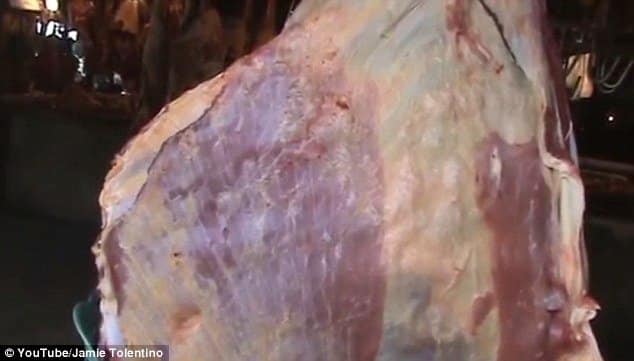 Apparently, the nerve endings in an animal’s body can continue to release impulses up to an hour even after its death. Consequently, the muscles twitch despite being dismembered. This video has amassed more than 300,000 views on YouTube.

Earlier this year, a Chinese woman named Ms. Cheng uploaded a shocking, similar video. In the footage, a lump of steak, which she bought from a butcher in Shandong province an hour before she recorded the clip, jumped on her kitchen counter.

Ms. Cheng was about to prepare the steak when she noticed the spasms. According to her, she did not find any worms or other parasites inside when she cut the meat open to inspect it.

An expert at the local animal department named Lv Suwen said, “You can rest assured this piece of meat is very fresh and is from a freshly slaughtered animal.

“The central nervous system is dead, but the nerve endings are still firing, resulting in the jumping, because the nerves are not yet dead. This will stop after a short time,” Suwen explained.