Abortion continues to be a taboo these days, and it is still considered a very sensitive topic to discuss. It is dividing people from across the world, so to speak. But for anti-abortion activists, “life begins at conception;” hence their disgust towards the idea.

A Twitter user by the name of Patrick Tomlinson – who is actually a known author – has recently gone up against anti-abortion activists. And how did he do this? Well, by asking a single hypothetical question.

His question, as it seems, is based on the line “life begins at conception.” Patrick believes that with all the debate these years, people have not really elicited an honest answer. By posting his question, he managed to prove that the adage is a tad more than an impractical, theoretical response. That this response is something pro-lifers utilize to evade an honest discussion.

He sets up the question by suggesting that it allows the respondent to gather two options. 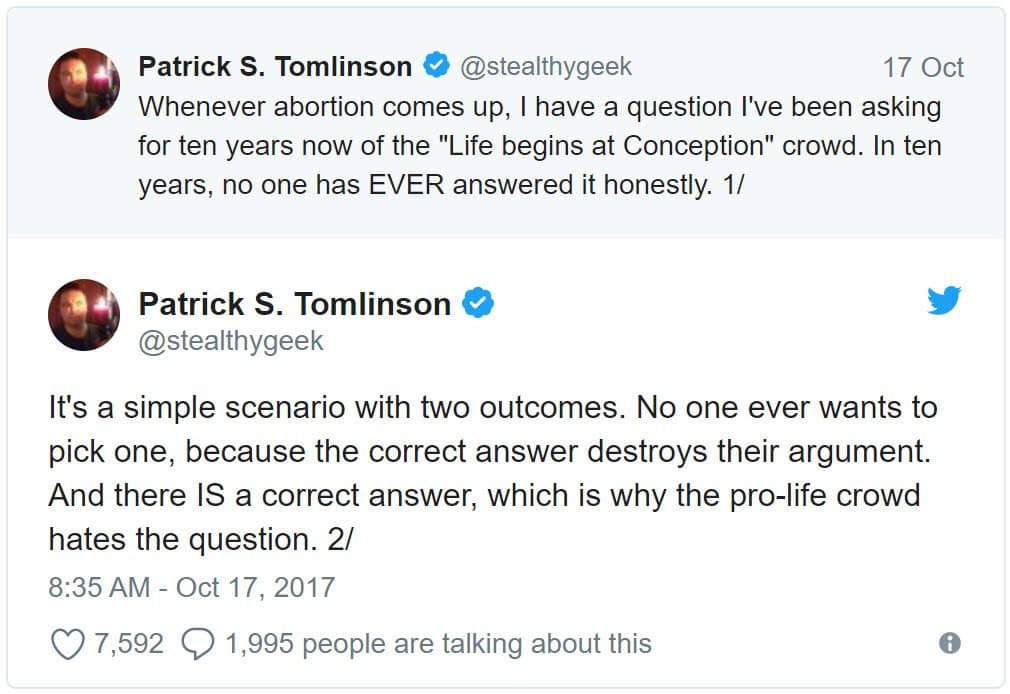 From there, he throws it. 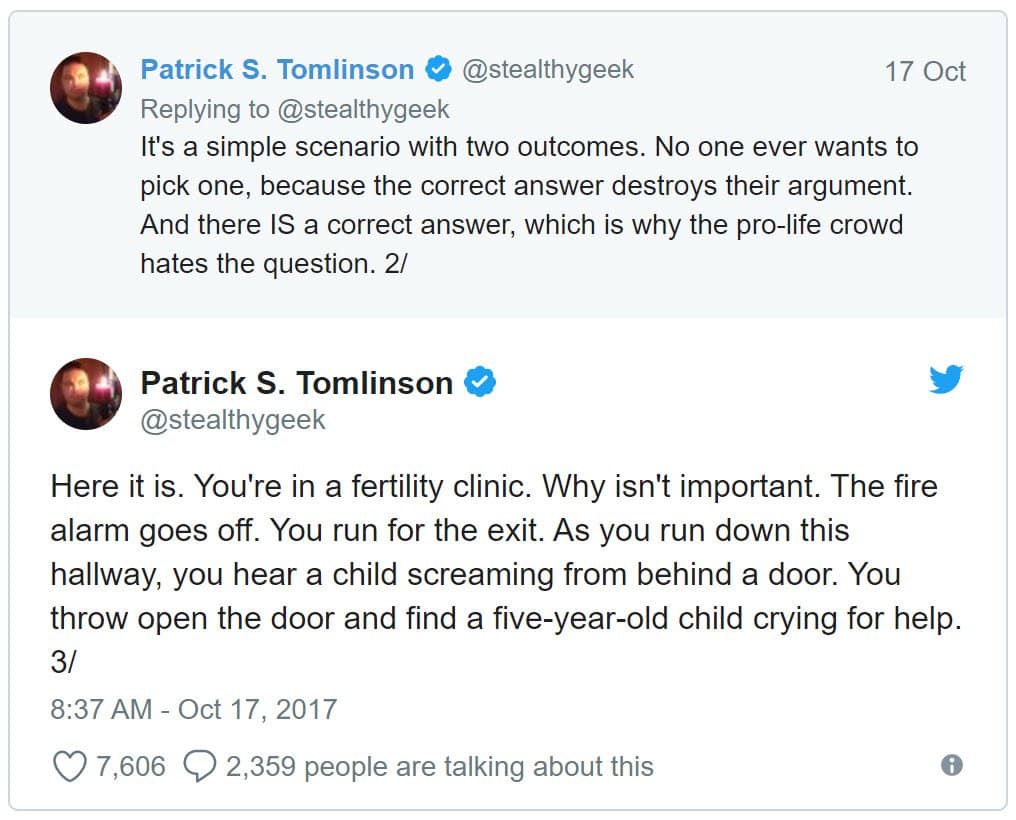 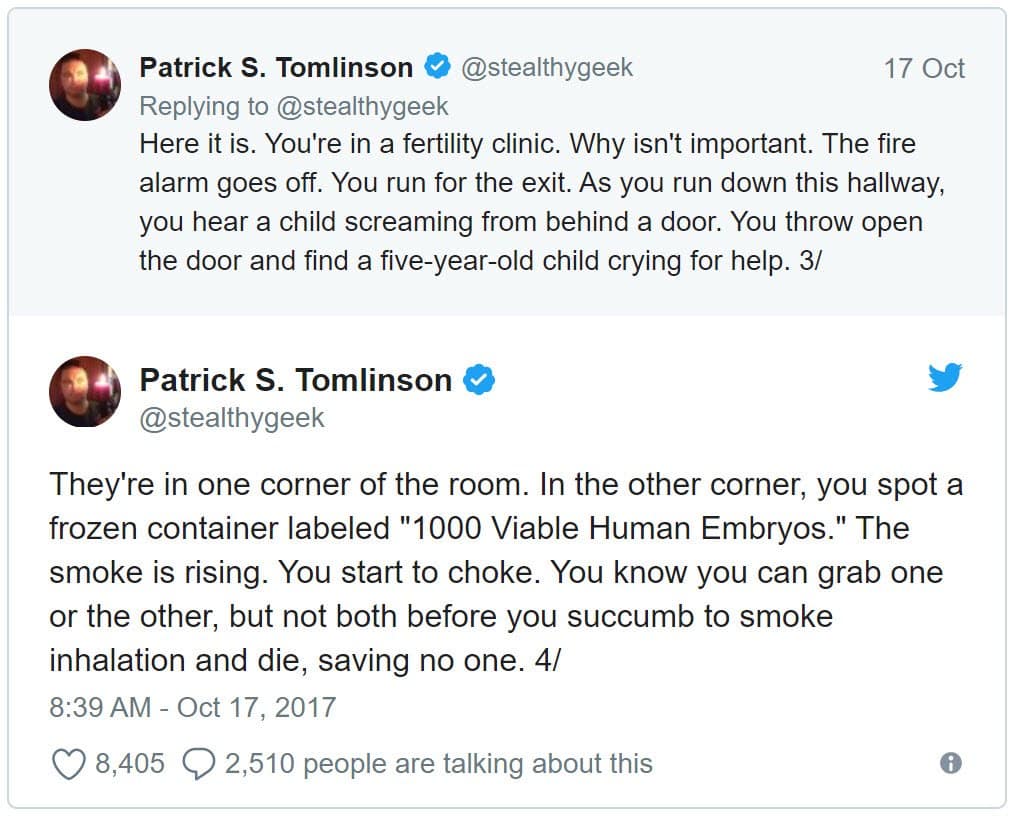 You really do not have to be a genius to notice the kind of discussion that must be made. 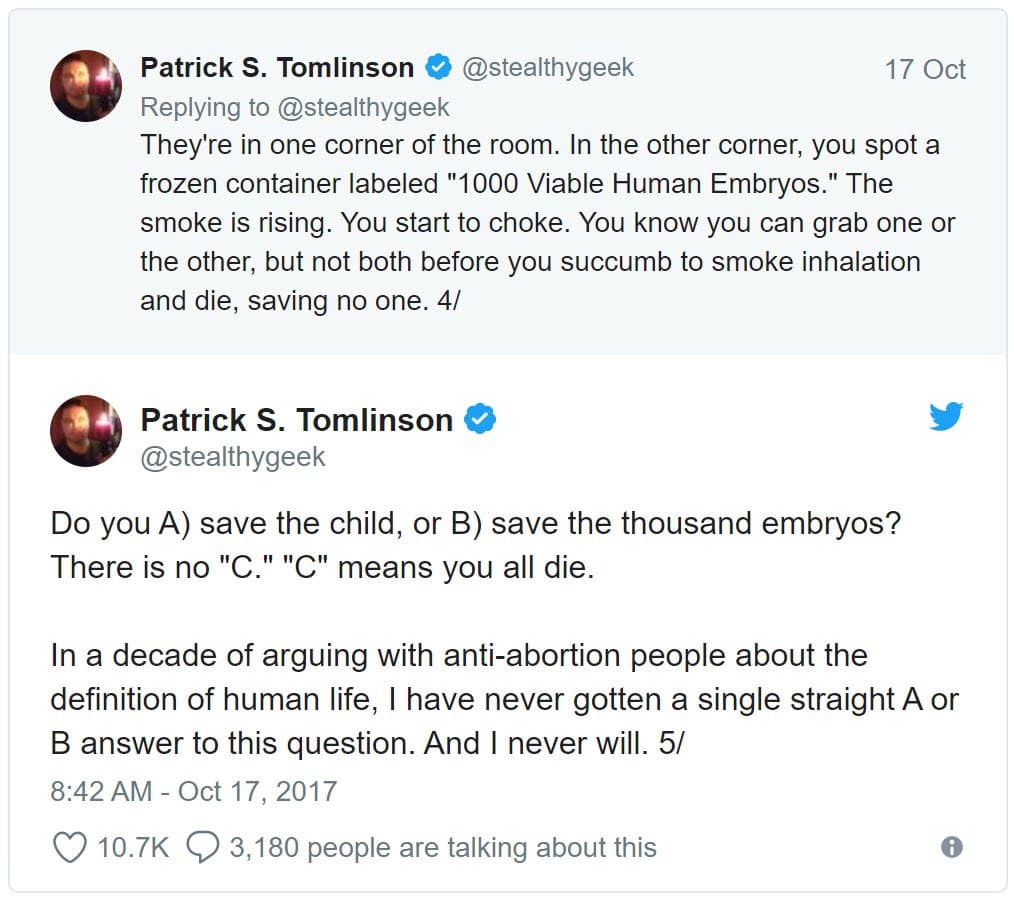 Imagine that there are, say, 1,000 embryos, and all of which are just as much human life as any breathing child or adult. You can say that the pragmatism here is to save the embryos, as it is deemed a more virtuous act.

So, which is which? 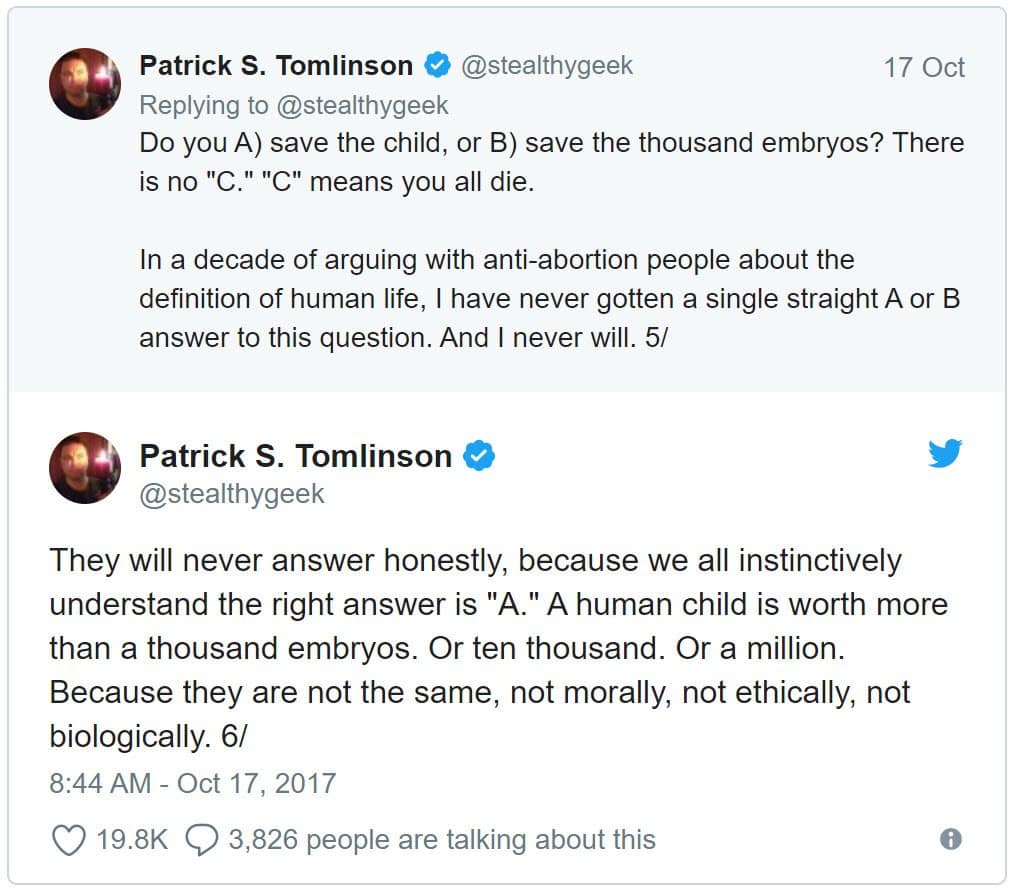 This is where Tomlinson presses the scenario to a whole new level. And so far, according to him, no one has ever provided him with a straightforward answer.

Obviously, it is a bit ironic considering that the question is merely simple and direct. 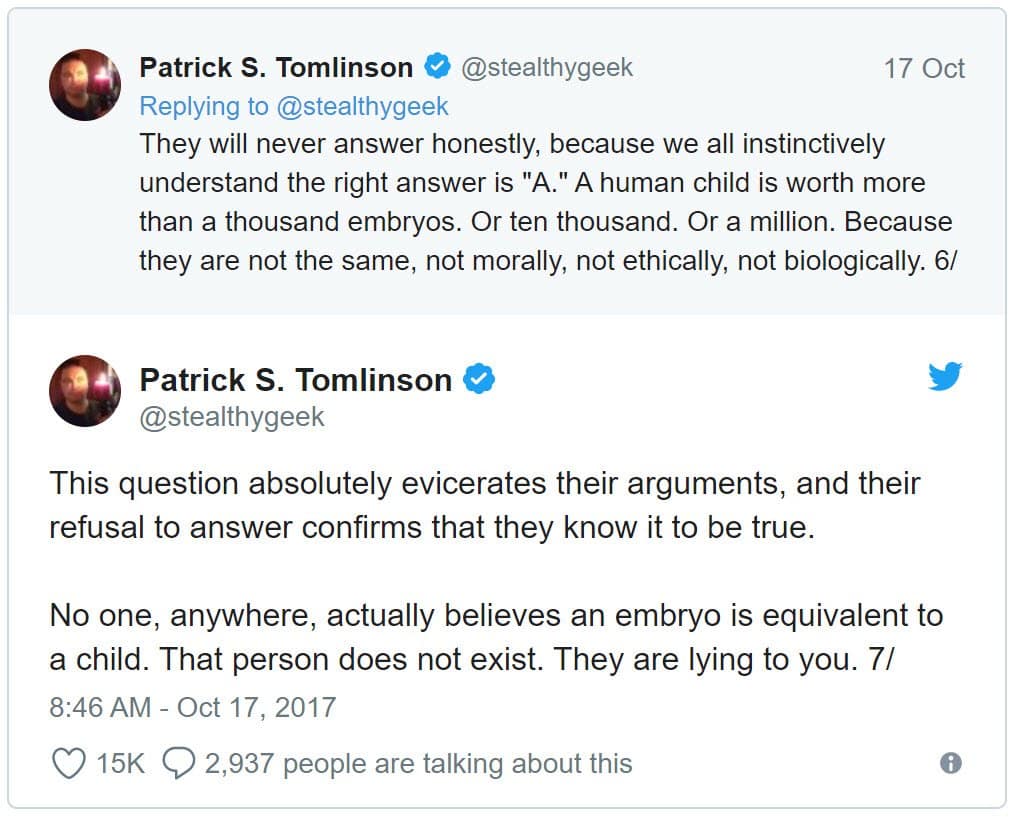 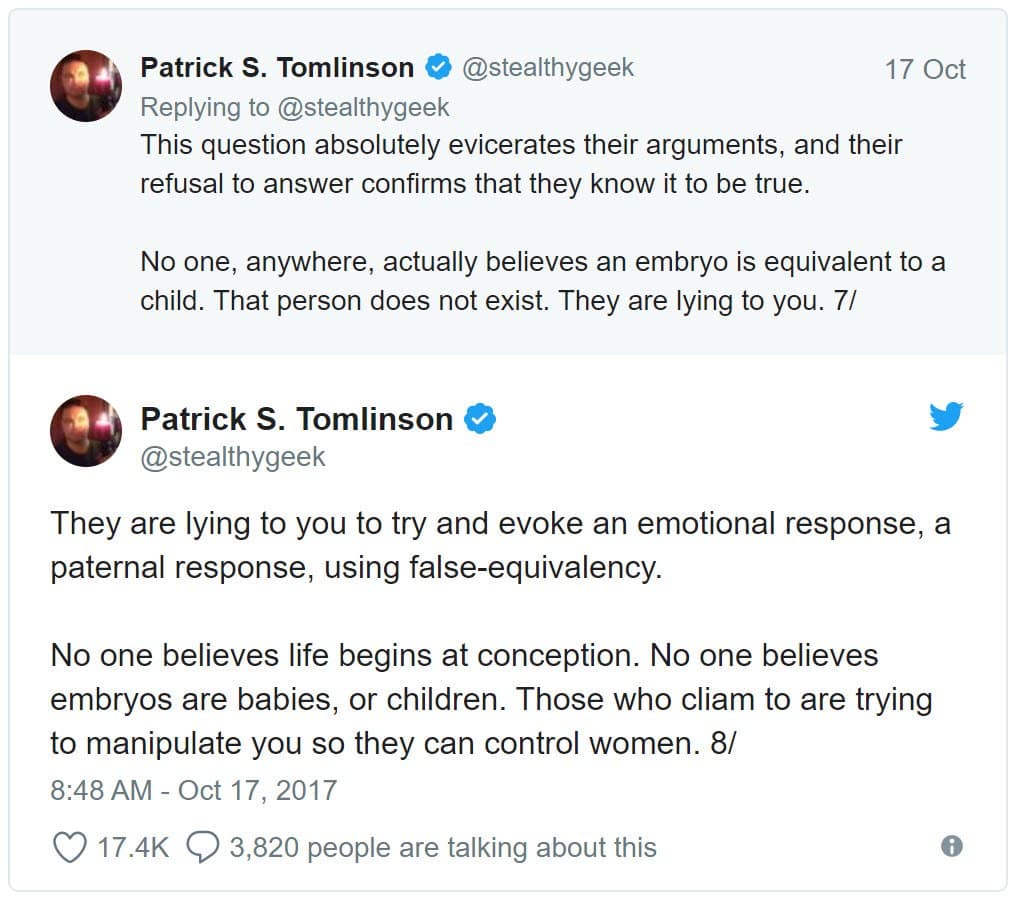 So, which do you save from the fire: a a five-year-old child or 1,000 human embryos? Seems a tough question, right? Well, not for Tomlinson, though. He argues that the right choice here is obvious, as “they are not the same, not morally, not ethically, not biologically.” He continues that in all his experience with anti-abortionists no one has ever believed that an embryo, contrary to what most would pick, is just as worthy as a human life.

For Patrick, this question is a way to call out anti-abortion activists. 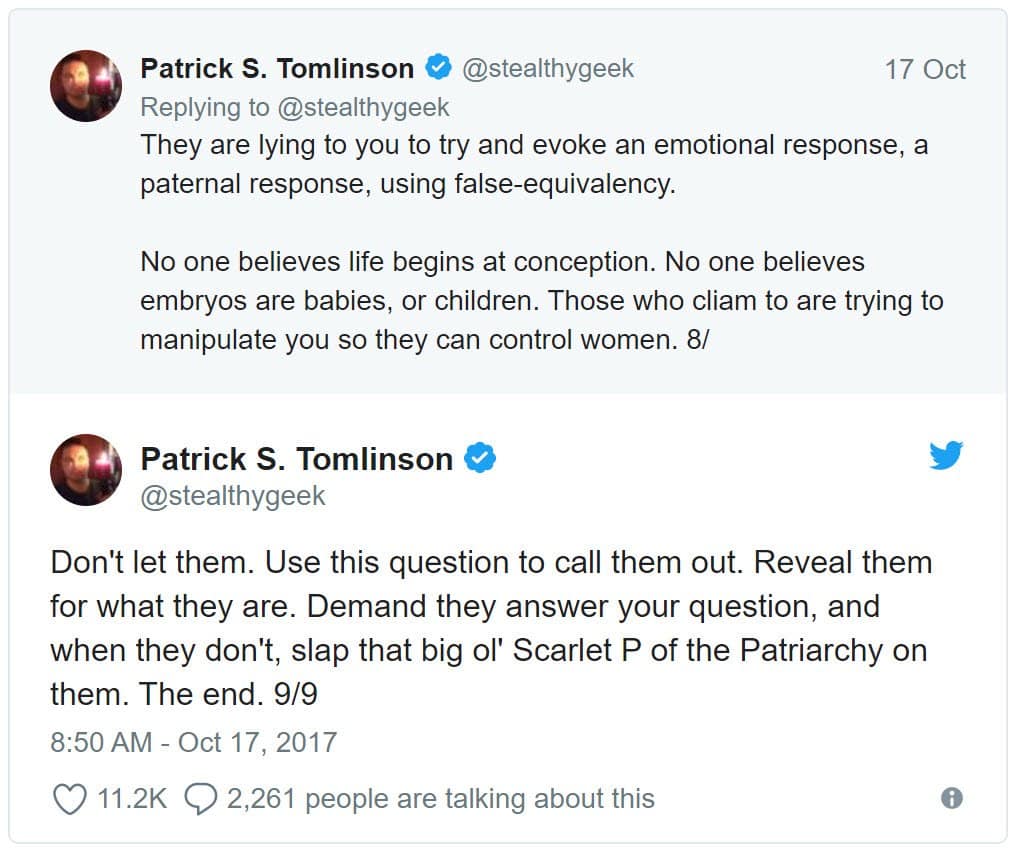 There is an assertion here actually, and it says that an embryo is alive. It is just as alive as a person is meant to goad an emotional response. Tomlinson finally affirms that this is the kind of blunt question that a respondent can neither equivocate nor evade. Rather, it can serve as a method of forcing somebody beholden to this line of thinking so as to confront the issue in black-and-white fashion. This is an exact opposite to clouding it with emotion.