Savannah Nguyen posted an alarming story on Facebook. It was about her mother Sony’s disturbing experience in the parking lot of a mall in Appleton, Wisconsin. Savannah believed that her mother had almost fallen victim to human traffickers.

Below is Savannah’s story: 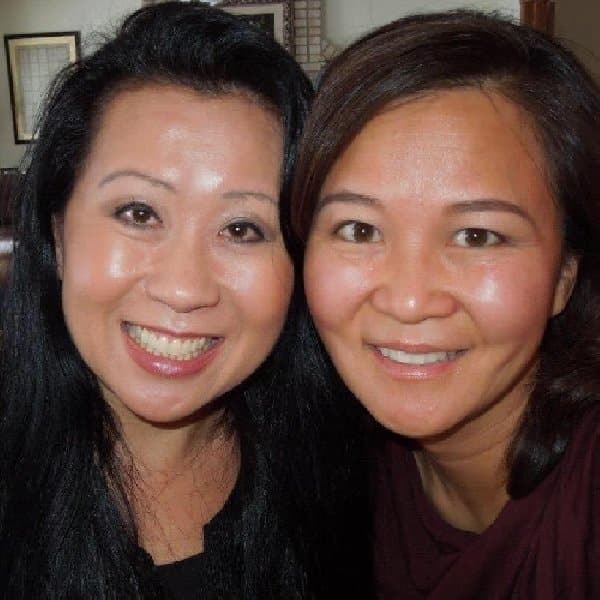 My mom was in Appleton at the mall and parked at Macy’s. She was alone and looking at her phone as she was leaving the building and approaching her car. Right after she got in, still looking at her phone, she noticed a large white SUV with tinted windows pull into the spot next to her. She always habitually locks her door as soon as she gets in the car (thankfully). She said she felt a little uneasy because there were so many other empty parking spaces, but they pulled up right next to her car immediately after she got in, so she decided to drive away. On her way home, she could hear something tapping against her windshield, but she didn’t want to stop. When she got home and out of the car, she found this under her windshield wiper.

A shiny pretty thing would easily distract anyone. 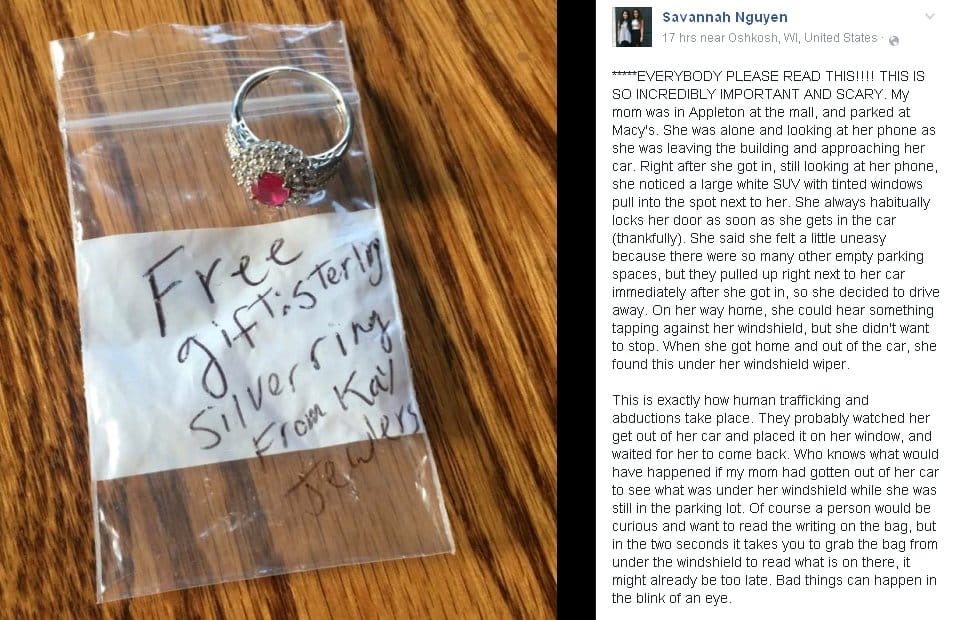 This is exactly how human trafficking and abductions take place. They probably watched her get out of her car, placed it on her window, and waited for her to come back. Who knows what would have happened if my mom had gotten out of her car to see what was under her windshield while she was still in the parking lot. Of course, a person would be curious and want to read the writing on the bag. But, in the two seconds it takes you to grab the bag from under the windshield to read what is on there, it might already be too late. Bad things can happen in the blink of an eye.

“Human trafficking and kidnapping is real, and not a topic to be taken lightly,” warned Savannah. 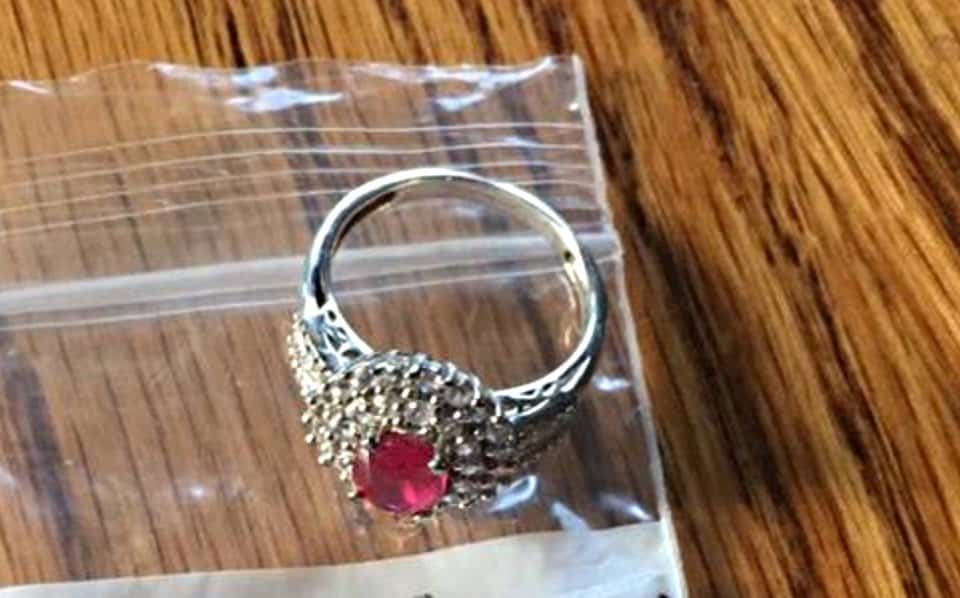 I strongly urge everyone to tell your loved ones about this scenario, whether it be your daughter, son, sister, brother, mom, dad, grandma, grandpa, or friends — and/or share this post and get the word out. This happened in broad daylight to my own mom (a forty-something year mother of four) and could happen to anyone, anywhere, at any time. Human trafficking and kidnapping is real, and not a topic to be taken lightly. You don’t think it will happen to you until it does. 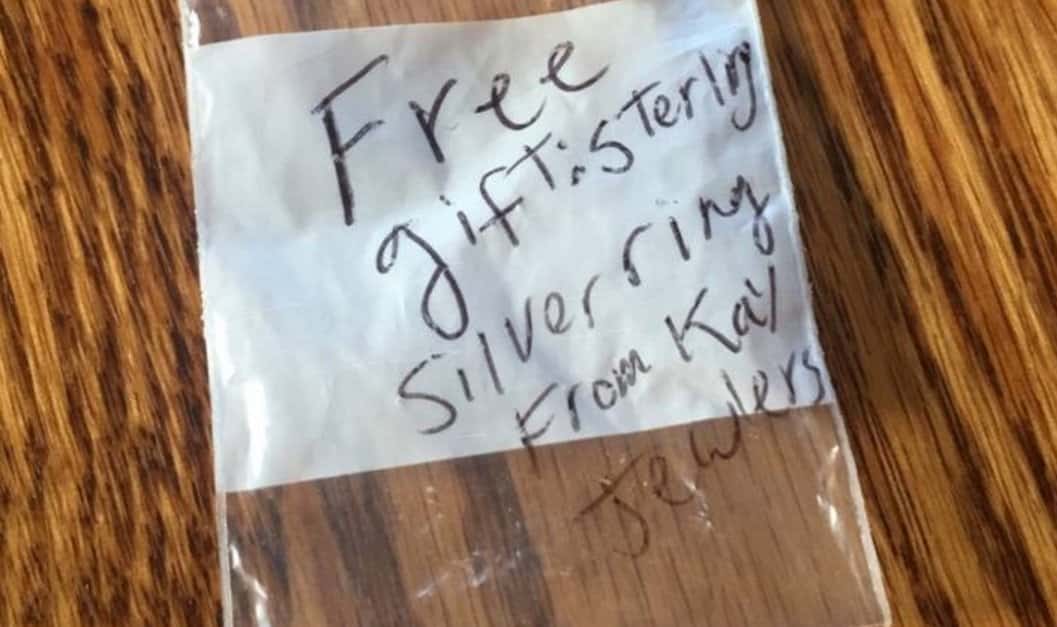 I stop by the mall by myself all of the time. After this situation, I would not recommend anybody go there by themselves or go anywhere by themselves for that matter. Especially teenage girls. Always try to travel in groups and always stay alert in parking lots or public places, especially at night. Don’t look at your phone when you’re walking to your car, and if you don’t have pepper spray, hold your hand in a fist with your keys between your fingers, perpendicular to your bones, until you get into your vehicle. It is so easy for predators to lure or target young women who are alone. So be smart, stay alert, and make it a priority to learn to defend yourself physically. Some people’s instincts and reactions don’t kick in until after the few seconds it takes for someone to sneak up and grab you from behind, and god forbid it be too late to save yourself.

The Grand Chute Police Department did a probe on the incident. 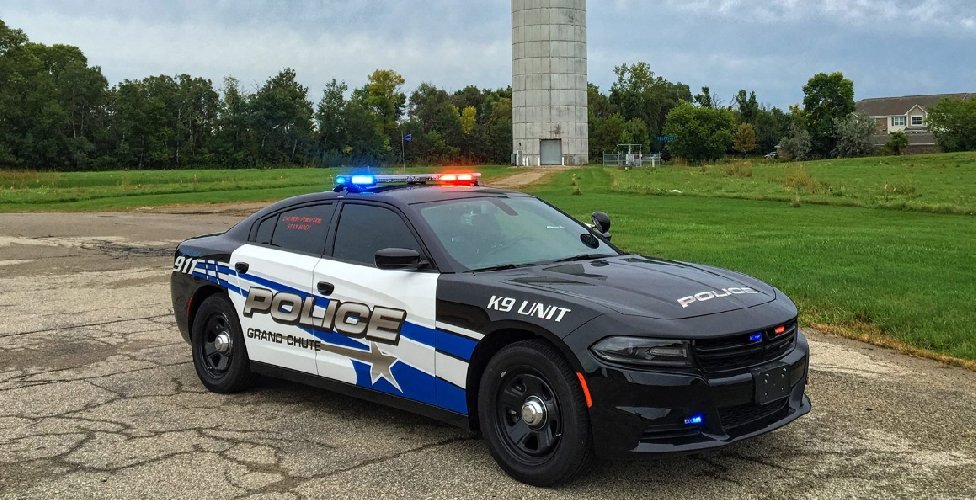 According to Snopes.com, the Grand Chute Police Department near Appleton, Wisconsin was aware about the suspected “human traffickers” incident that Savannah had written about.

Moreover, a post published on the Grand Chute Police Department Facebook page informed residents of Appleton that they were investigating the story.

“Our department has received several inquiries regarding a Facebook post describing an incident that happened yesterday in the Fox River Mall parking lot in which a piece of jewelry was placed on the windshield of a car. The vehicle was then approached by another vehicle as the person got into the parked car. We are investigating the incident and we are working with mall security staff to keep the area safe and enjoyable for everyone.”

Cops gave it their best shot but, alas, no suspects were identified. 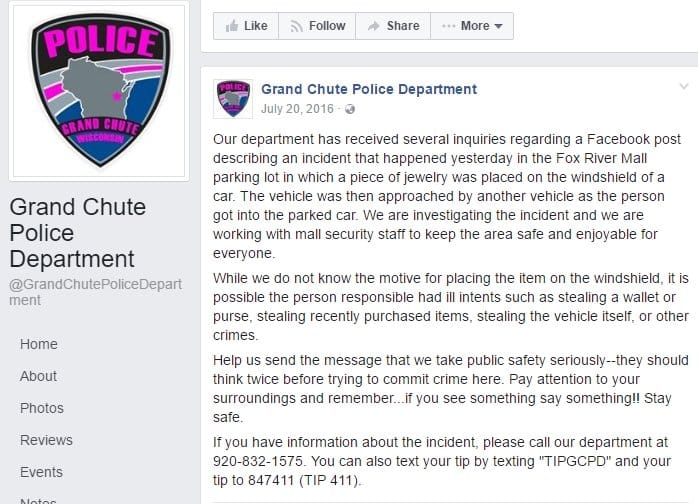 “While we do not know the motive for placing the item on the windshield, it is possible the person responsible had ill intents such as stealing a wallet or purse, stealing recently purchased items, stealing the vehicle itself, or other crimes.”

Ultimately, they were not able to identify the people — the suspected human traffickers — who left the ring on the windshield. Savannah’s original Facebook post also seemed to have been taken down. Or, perhaps, it was simply made private?

Nevertheless, screenshots of the post remain online since it went viral. Whether the story is real or not, it still serves as a reminder for all of us to be more aware of our surroundings and be more mindful of our safety.