Parents lead by example and kids easily learn based on what they observe from their parents. When it comes to staying healthy, it’s important for parents to be the role models.

If you want your kid to enjoy exercise instead of hating and avoiding it, you, as parents, need to establish the habit during early childhood. Kids will grow up enjoying the activities instead of making excuses not to do them.

“Moderate to vigorous physical activity feeds the brain with water, glucose, and oxygen, which we all need for optimal performance,” Pica said, adding that the activities should also make us feel better with the endorphins circulating in our bodies.

When a couple enters parenthood, at some point, they tend to lose focus on themselves and more on their children. As a result, some fail to live a healthy lifestyle and even lose shape. For dads, there’s that term called “dadbod,” and while it’s not at all bad to have a dadbod (in fact, it became the trend), some would still like to maintain a healthy lifestyle and a healthy body – just like this guy in the video below. 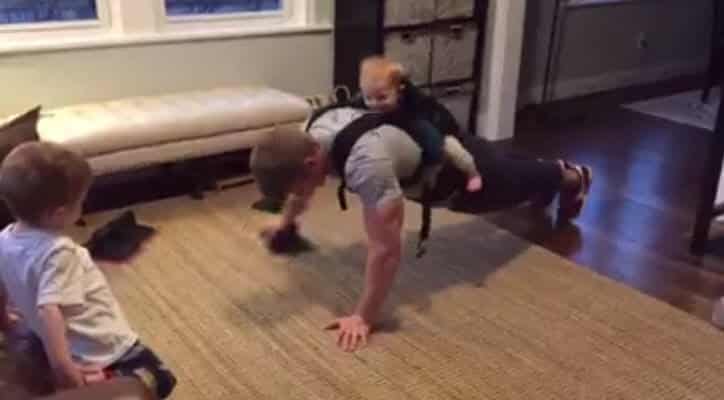 For this one man, he not only won at parenting, but has managed to include his kids in his exercise routine. You may think that it’s hard to have children running around while you work out, but not for Brent Kruithof, founder of FLYUP Fitness.

You can see Kruithof’s toddler son planking beside him, while he also babywears a younger son on his back.

“Exercising can be something that people dread all day long, but when I’m having fun with my family, it’s never something I dread,” Kruithof told Popsugar.

Check the video below and see how fun and entertaining it is having kids participate in the exercise.