Unusual animal friendships are becoming common nowadays. Perhaps it is by living on the same home and experiencing the same conditions with members of other species determine how they feel for each other and not about inborn loathing.

We have heard about a tiger and a goat, a tiger, kangaroo and gibbon, a bear, lion and tiger, which are all in good terms.

These phenomena may have caused many to be amazed that such companionship between two different animals are real.

Did you ever imagine that a bird and a dog can hang out together like this? Sweet isn’t it? 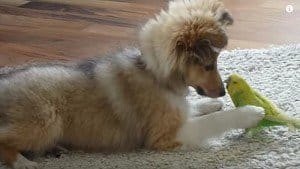 House pets such as a dog and a bird can be best friends. Like in the video below, you can see the odd friendship between the puppy and green bird as they play. The bird is trying to snuggle the dog and the other is just allowing it. You will see how they move; the dog’s tail is wagging which means he is happy. Their bonding went on and on and it seems that they are enjoying themselves.

Maybe their friendship is just new and developing, the bird at one point flew away then came back and continued to “convince” the dog to play once more. Amazingly, the dog responded by placing his paw on top of the bird without harming it and started smooching this cute little green pet.

Watch the Video of a Blossoming Friendship Between a Puppy and a Bird:

It is safe to say that no matter what specie and size of a creature, they can be good friends or at least go together without causing any trouble. Even though the bird is tiny and fragile, the puppy played with it carefully. No brawling, just a fun play and kindness were exhibited by the two pets.

The owner did not worry as they interact and play; perhaps this may be an indication that he is confident that neither of the two would initiate harm to the other especially the dog who is definitely bigger and stronger. They both look so cute and adorable. I definitely love to own them!

What can you say about these two kind hearted pets? We love to hear from you!