The Yakuza is among the many organized crime syndicates in the world. They’re as popular as the likes of the Sicilian Mafia, the Triad, and the Los Zetas. But while they’re into loathsome things, we can all agree that the Japanese group also cares so much about tradition and culture. In fact, they heavily show this in the form of body art or tattoo, which is called irezumi.

What people don’t know, however, is that these Yakuza tattoos reflect symbolism and imagery. The full body suit art is actually a direct result of the group’s culture. Associates are obliged to undergo it – otherwise, they wouldn’t be full-pledged members. It holds true, however, that most of them have opted to maintain clean skin nowadays. They believe that by doing so, they can better blend in with the society.

Nevertheless, it can’t be denied that the Yakuza have influenced a lot of people from around the world in terms of tattoo designs. Many have decided to tattoo themselves with designs similar to the gang.

Below are 16 of the most common images and/or motifs featured in the gang’s beautiful array of tattoos, along with their respective meanings. 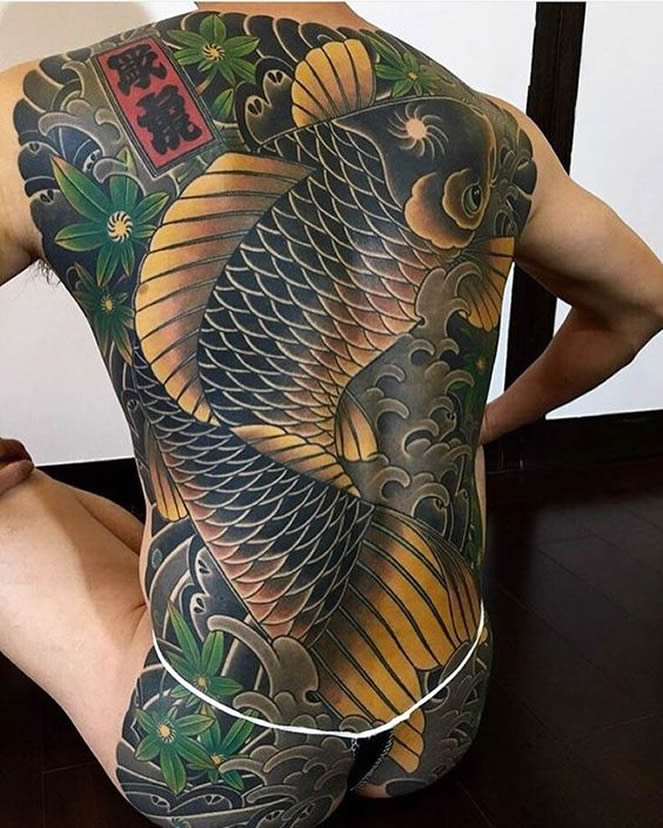 This one here is a very common design in the group, and it generally symbolizes fortune and good luck. In Japanese myth, a koi is believed to be capable of climbing waterfalls. Hence the fish represents perseverance and motivation. Anyone who has this design is said to have endured a very rough experience. 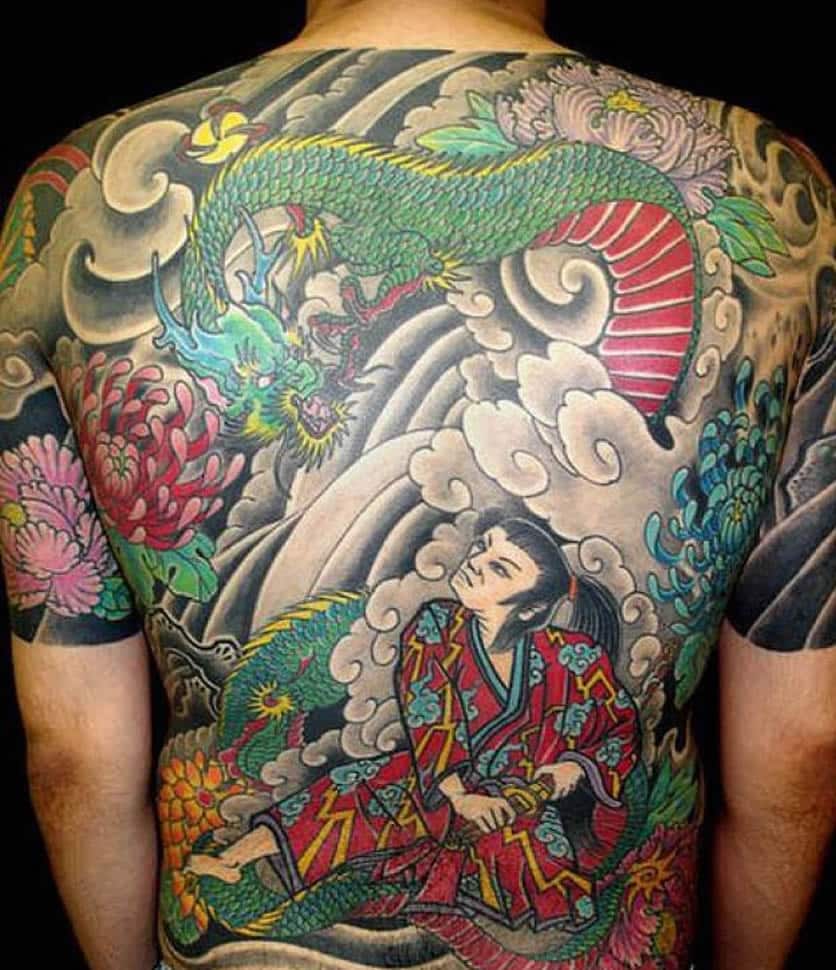 It should be noted that people in Japan have different views towards dragons compared to those in the West. The Japanese see these mythical creatures as protectors and benefactors of humanity, not a beast to be feared of. For the Yakuza, this creature means wisdom, strength, and bravery, among many others. However, there are different versions of these dragons. For instance, black dragons represent experience while the green dragons are associated with nature. Gold dragons, on the other hand, represent value. 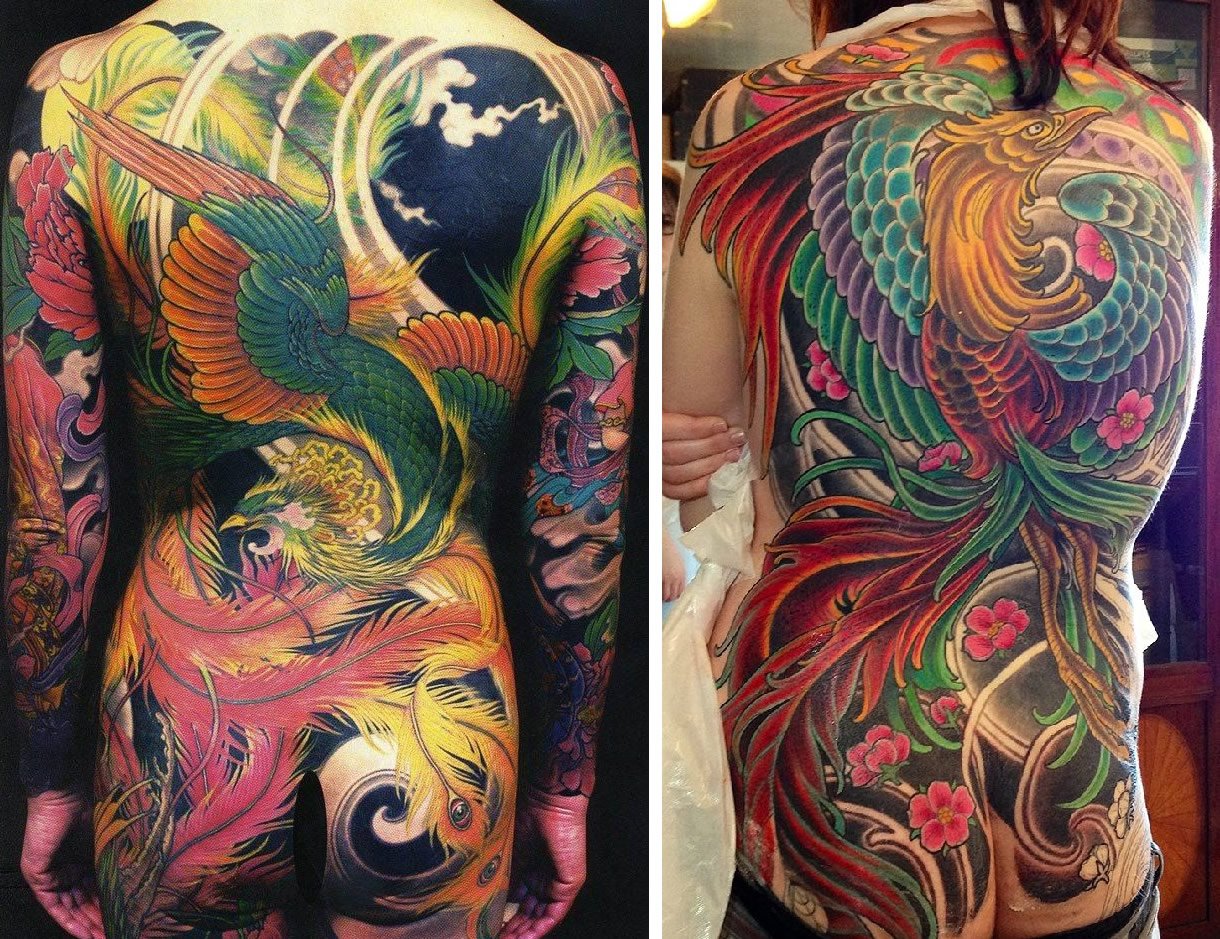 In Japan, the Phoenix is a mythical creature consumed by fire and is reborn from its very own ashes. It’s a very common motif in the group, representing triumph, redemption, and rebirth. Interestingly, though, the myth involving the Phoenix came from China. And it’s just among the many myths associated with Japanese culture. 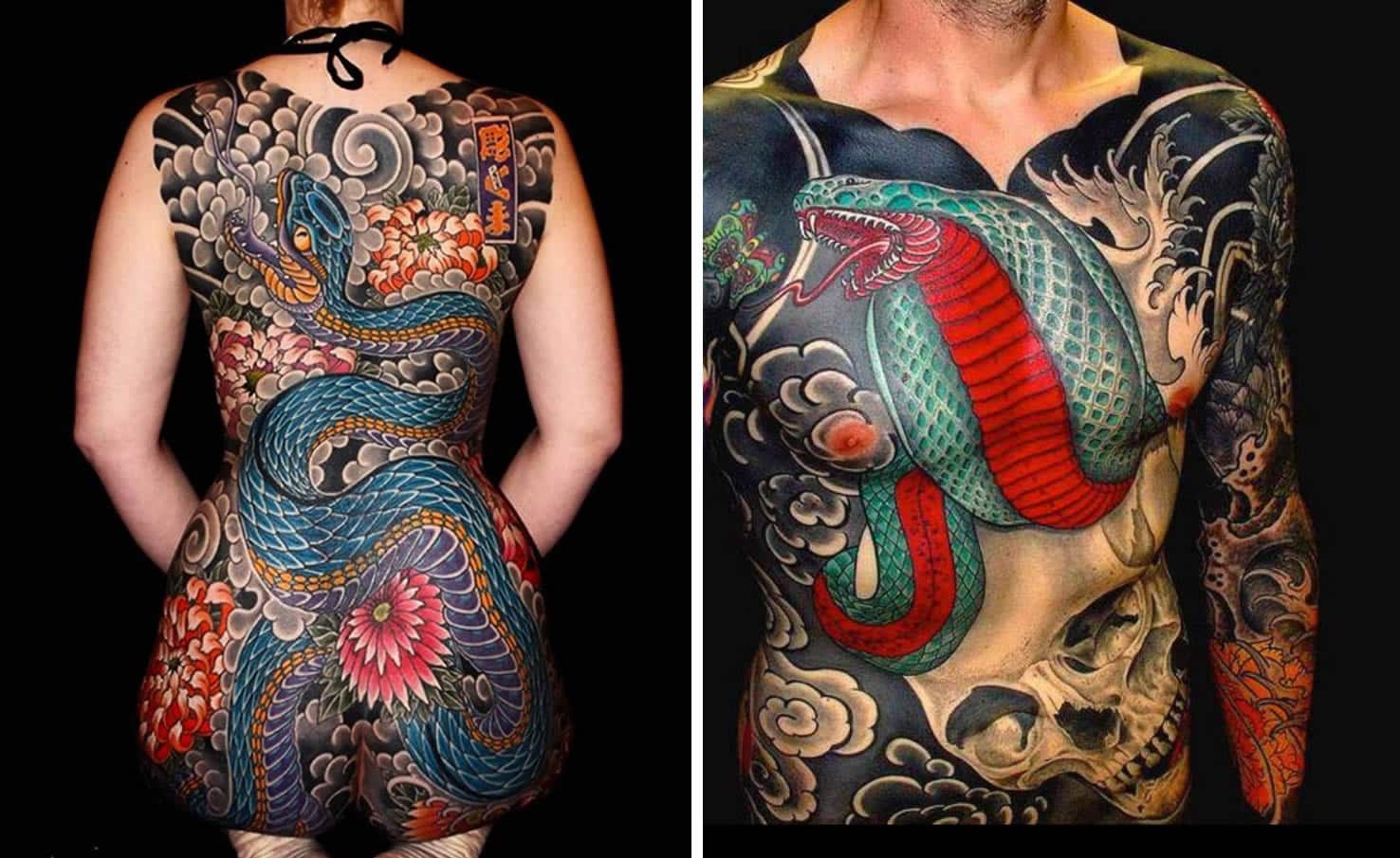 The snake tattoo has a lot of meanings in the Land of the Rising sun. It’s sometimes considered as an embodiment of good health and regenerative power. In the country’s folklore, however, it means prophecy, wisdom, and power. It’s also believed to represent illness and bad luck. 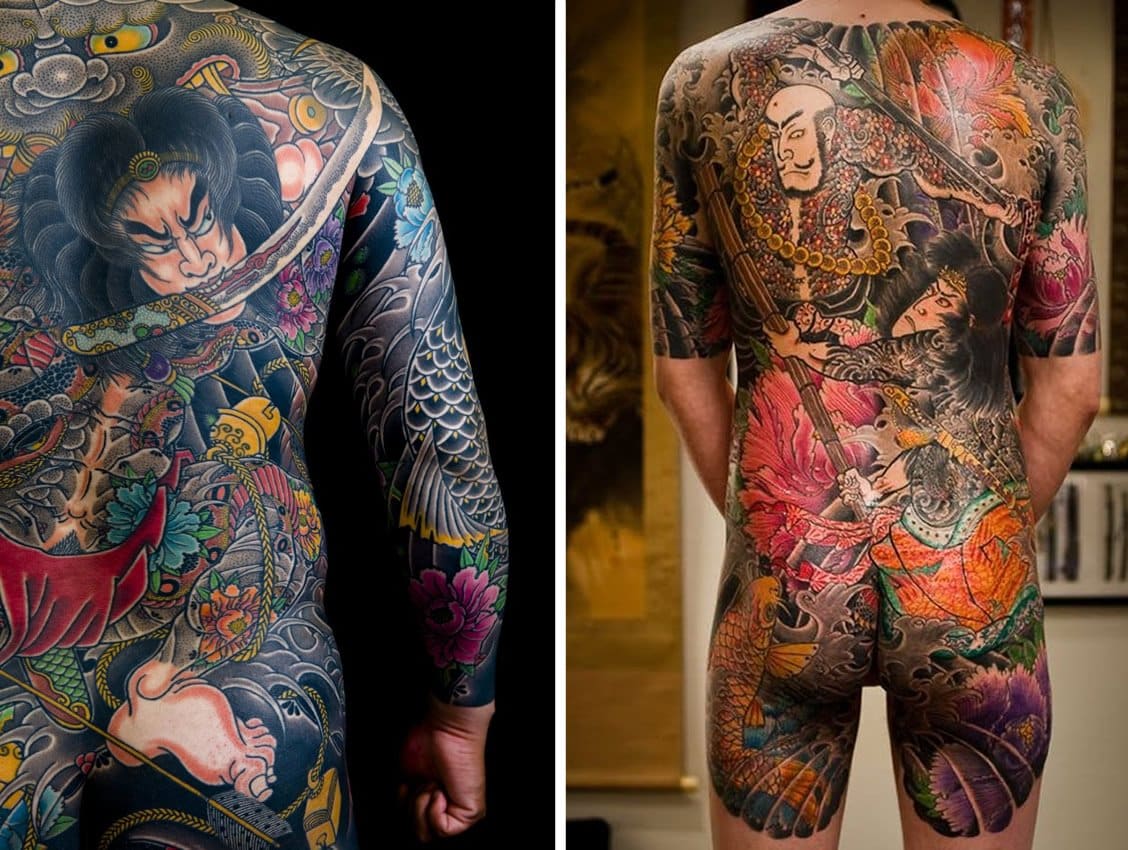 This one here mainly represents the titular “the code of Bushido,” which means “the way (do) of the warrior (bushi).” The code, in particular, symbolizes courage, loyalty, hope, and just action. The Yakuza has actually adopted a plethora of tenets from Bushido, as they consider themselves protectors of ancient Japanese tradition. There were reports, though, about early Yakuza members being enemies with the samurais. 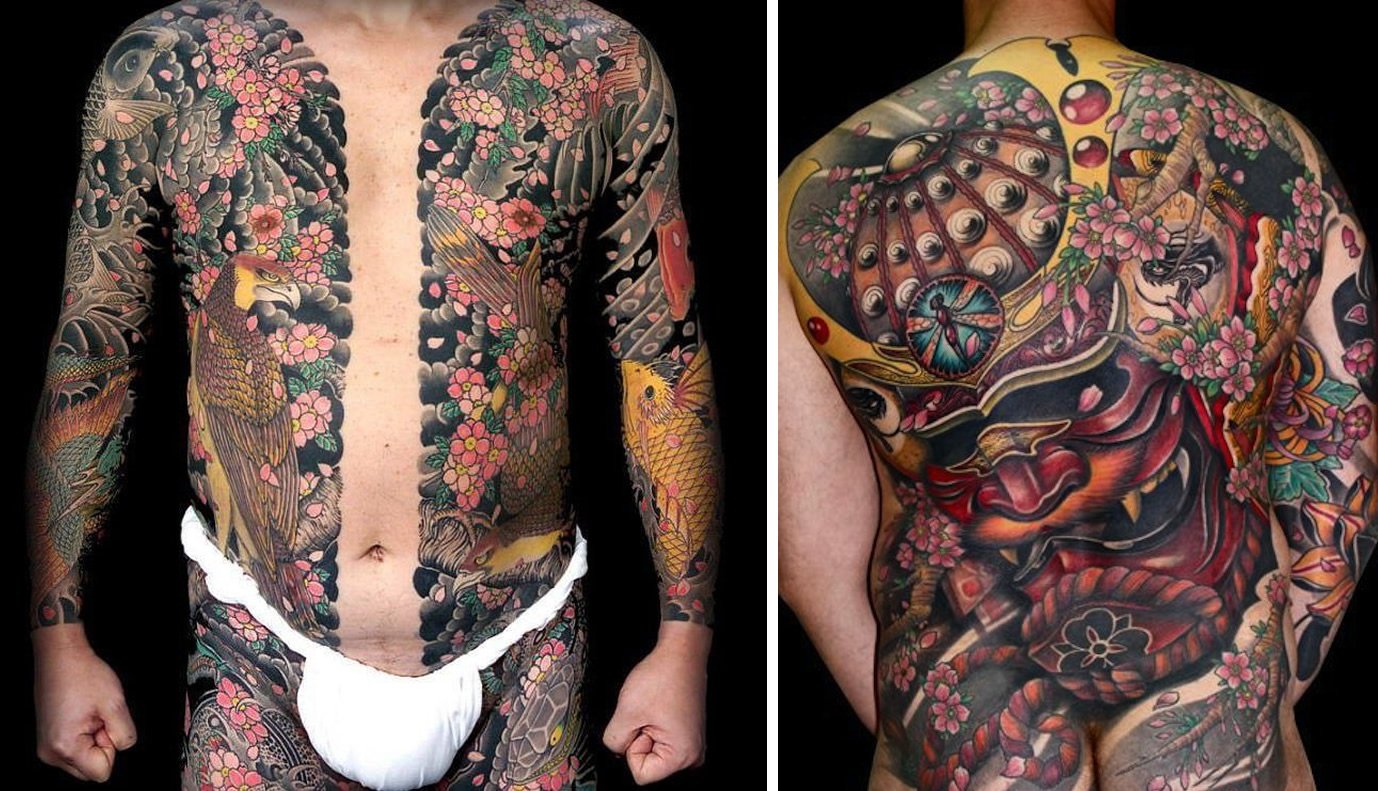 Sakura or cherry blossoms are quite significant in the Japanese culture as it represents life itself. Once a sakura falls from the tree, it gets scattered by the wind and rain, and then vanishes from the Earth. 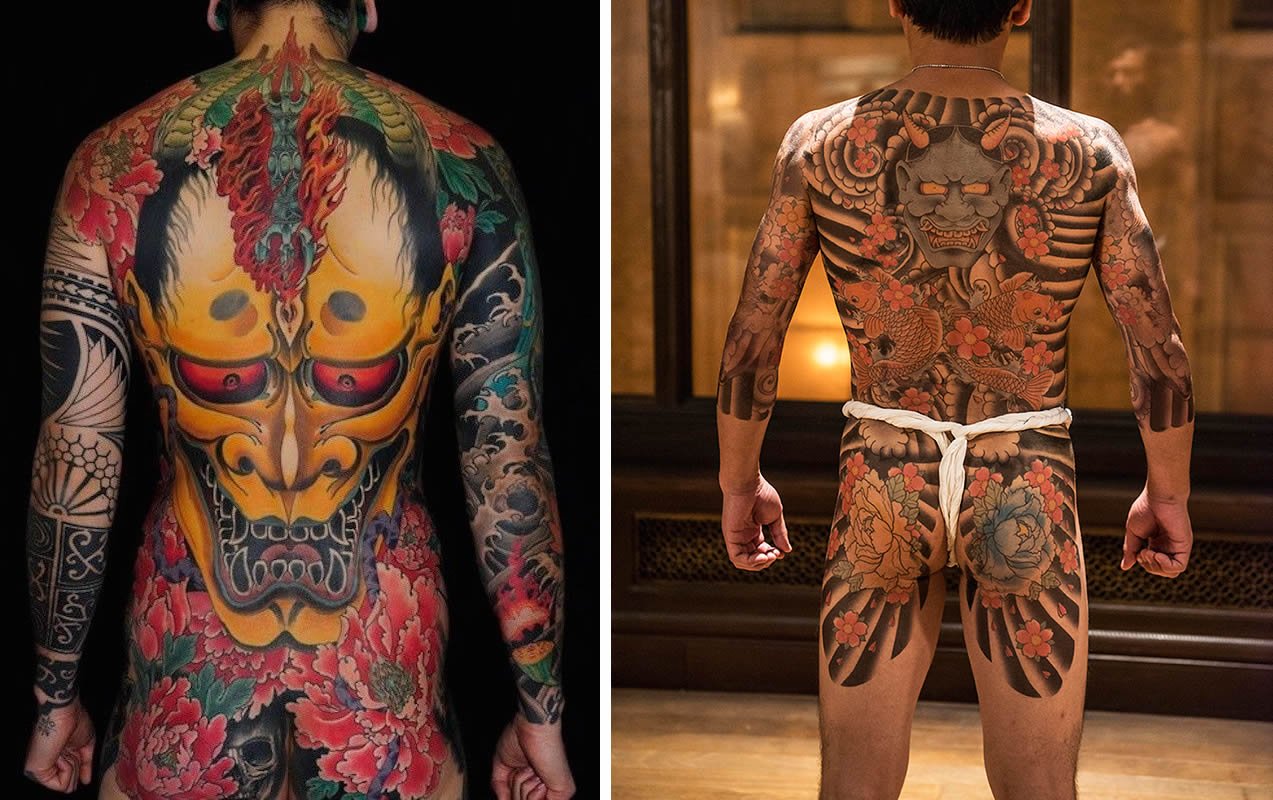 Oni are simply demons or ogres, all of which dole punishment to the wicked. While they’re extremely nasty, in one way or another, they’re also intelligent. They’re favorite food is human flesh, though. In Yakuza’s tradition, the oni mask represents punishment or the doling out of behavior codes. The oni are known to ransack villages and deteriorate wicked people – traits that somehow reflect the Yakuza’s lifestyle as a whole. 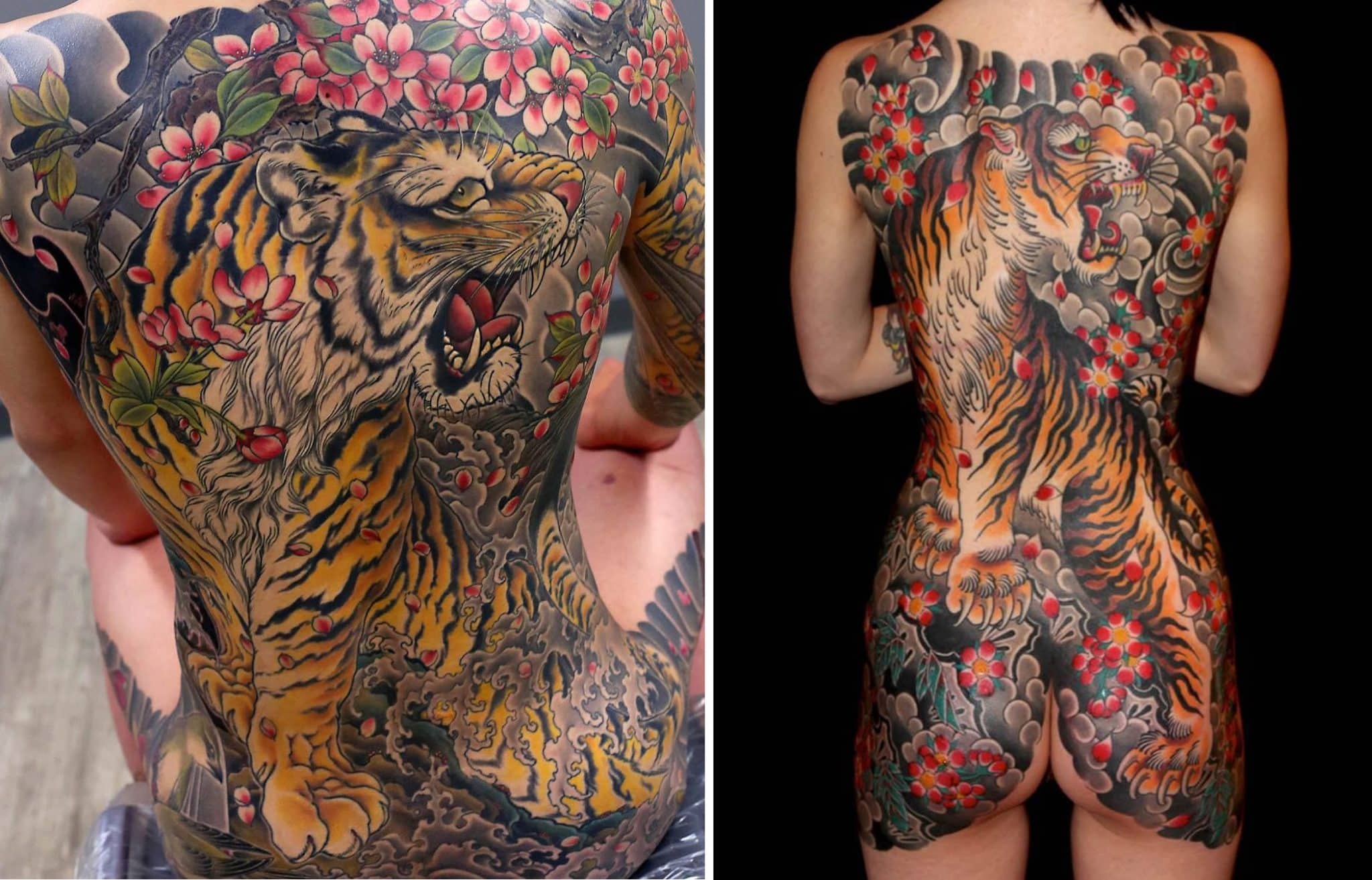 Tiger or “tora” stands as a symbol of protection against disease, demons, and bad luck in Japanese culture. It also represents autumn and is believed to be capable of controlling the wind. The tiger in the country’s folklore is one of the four elemental animals. The Yakuza see the tiger as a representation of strength and courage.

The Japanese see skulls (also called zugaikotsu) as a representation of change and respect for a person’s ancestors. It is also often deemed as a symbol for life’s cycle as a whole. Death, in particular, is viewed as an important factor in one’s life cycle. 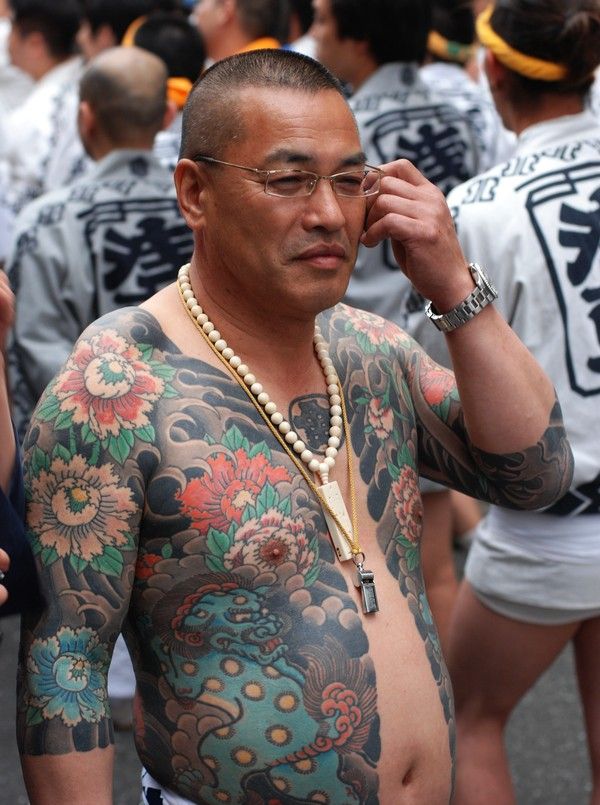 Foo dogs are basically the Lions of Buddha and are deemed the guardians of the Buddhist temples. All Japanese temples can be seen with status of foo dogs. They also come in pairs, which are called the komainu. Although it’s a lion, its name came from its resemblance to the canine creatures. The foo dog is a very popular tattoo design in the Yakuza, representing protection against evil and danger. 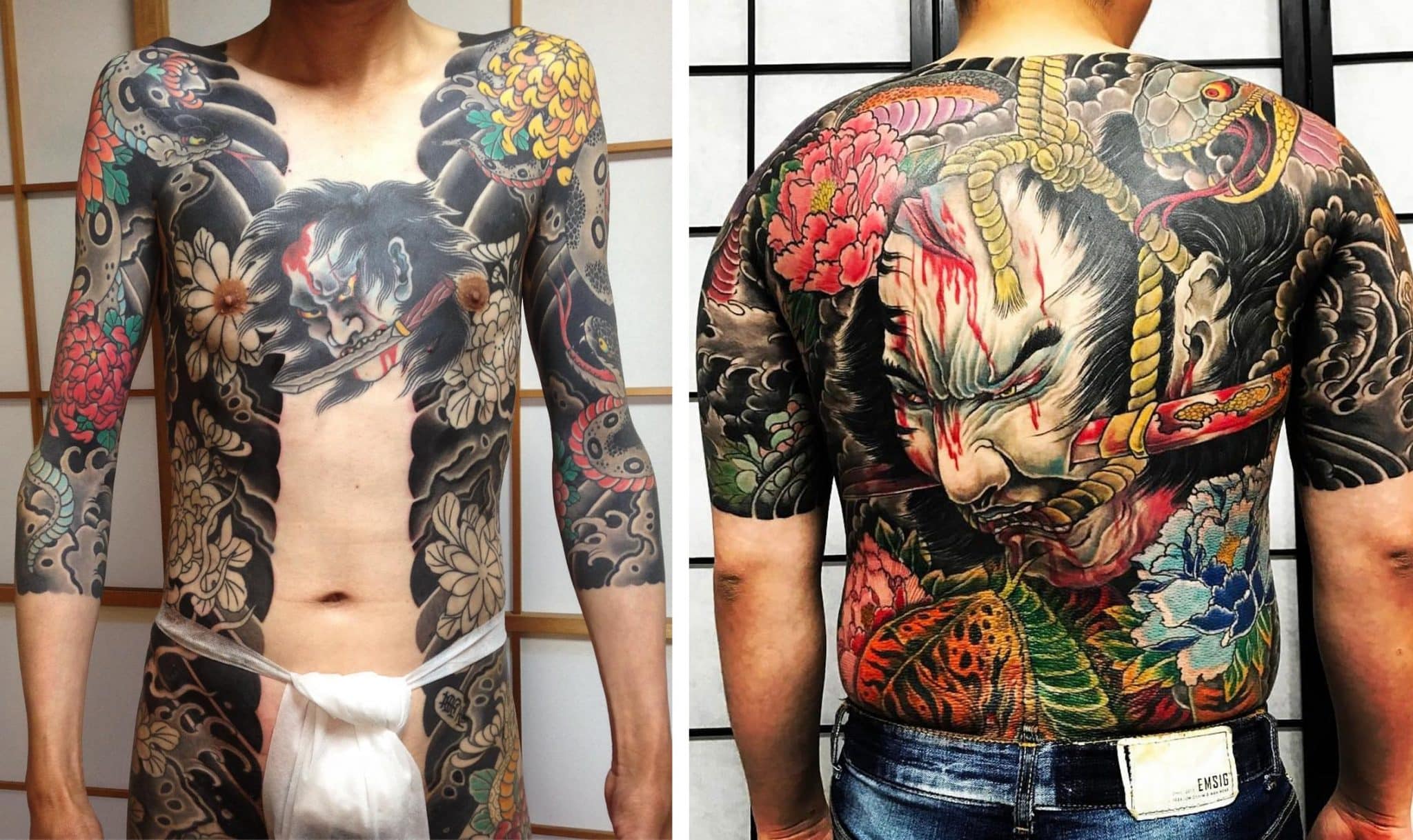 Known as Namakubi, the severed head means fearlessness, courage, and bravery. Interestingly, it also represents respect for an enemy or foe. The tattoo is deeply rooted with the samurai’s so-called headhunting tradition in battles. 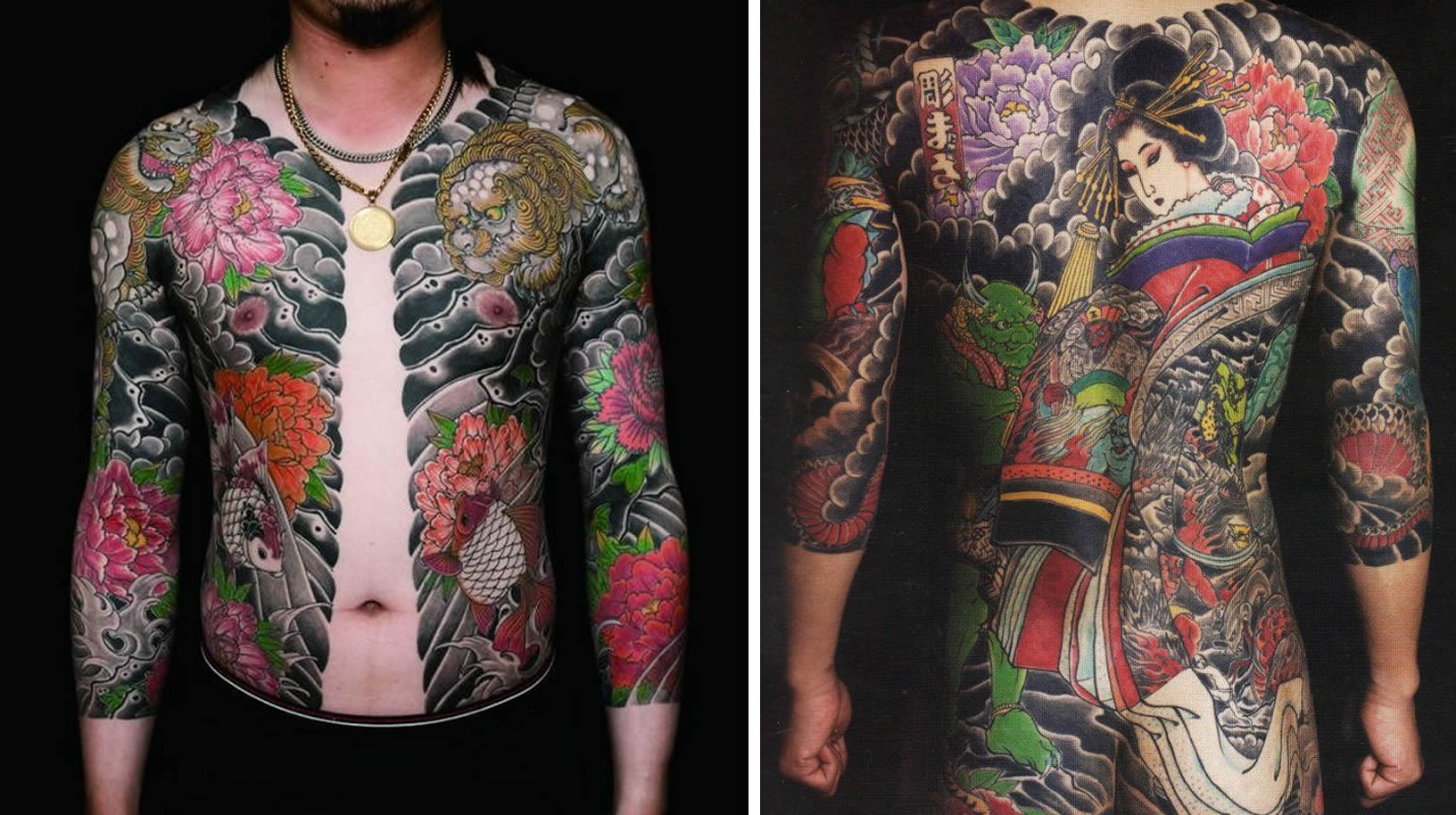 The peony flower, also known as botan, symbolizes prosperity, wealth, and elegance. It is in fact known as Japan’s King of Flowers. For the yakuza, the peony means masculinity, strength, and a “devil-may-care” attitude. 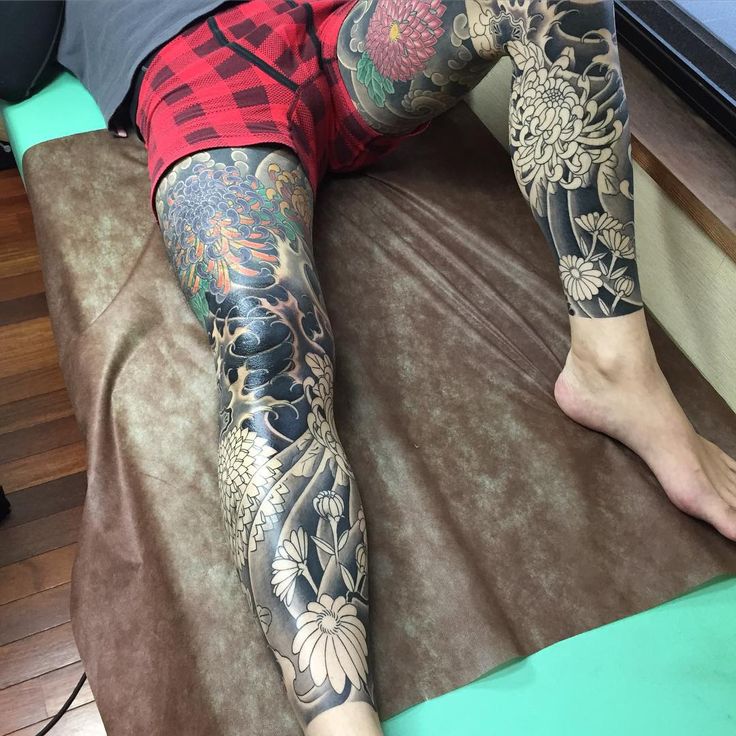 This is perhaps one of the most popular tattoos people acquired from the Yakuza. The Chrysanthemum stands as a symbol for the Imperial family. Considered as a solar flower, its petals are believed to radiate outward like flames. The center of the tattoo or flower represents the social status of the emperor. In the Yakuza’s irezumi, this tattoo can sometimes appear with other large, intricate designs. 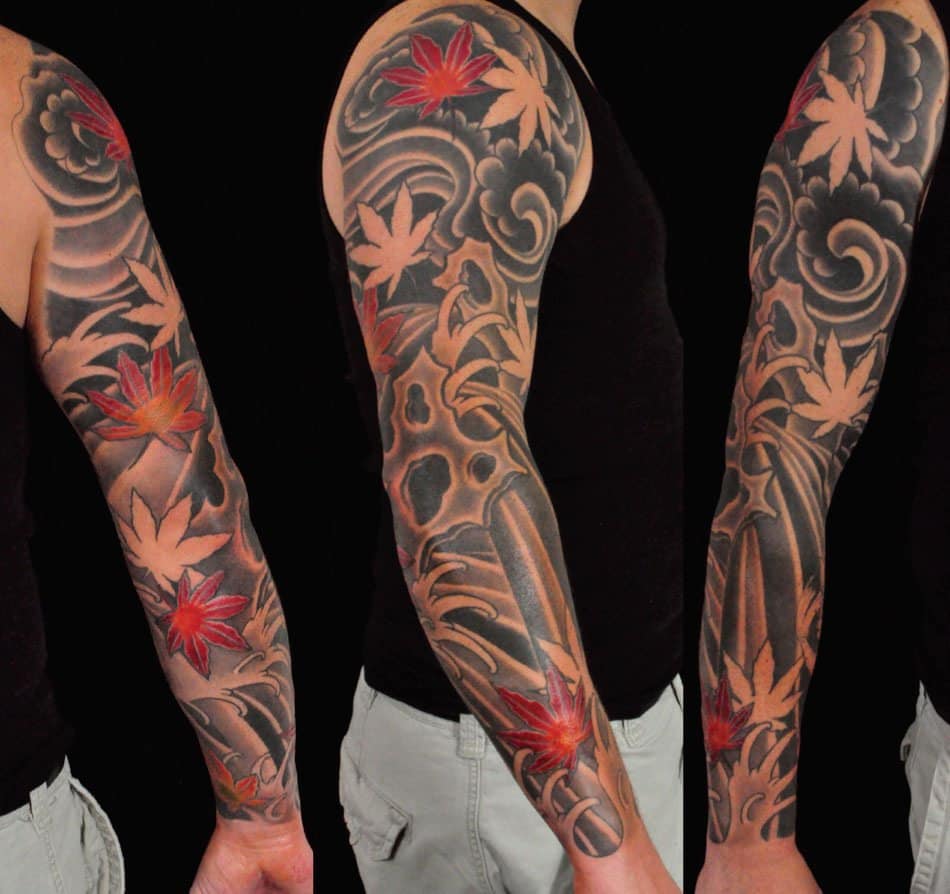 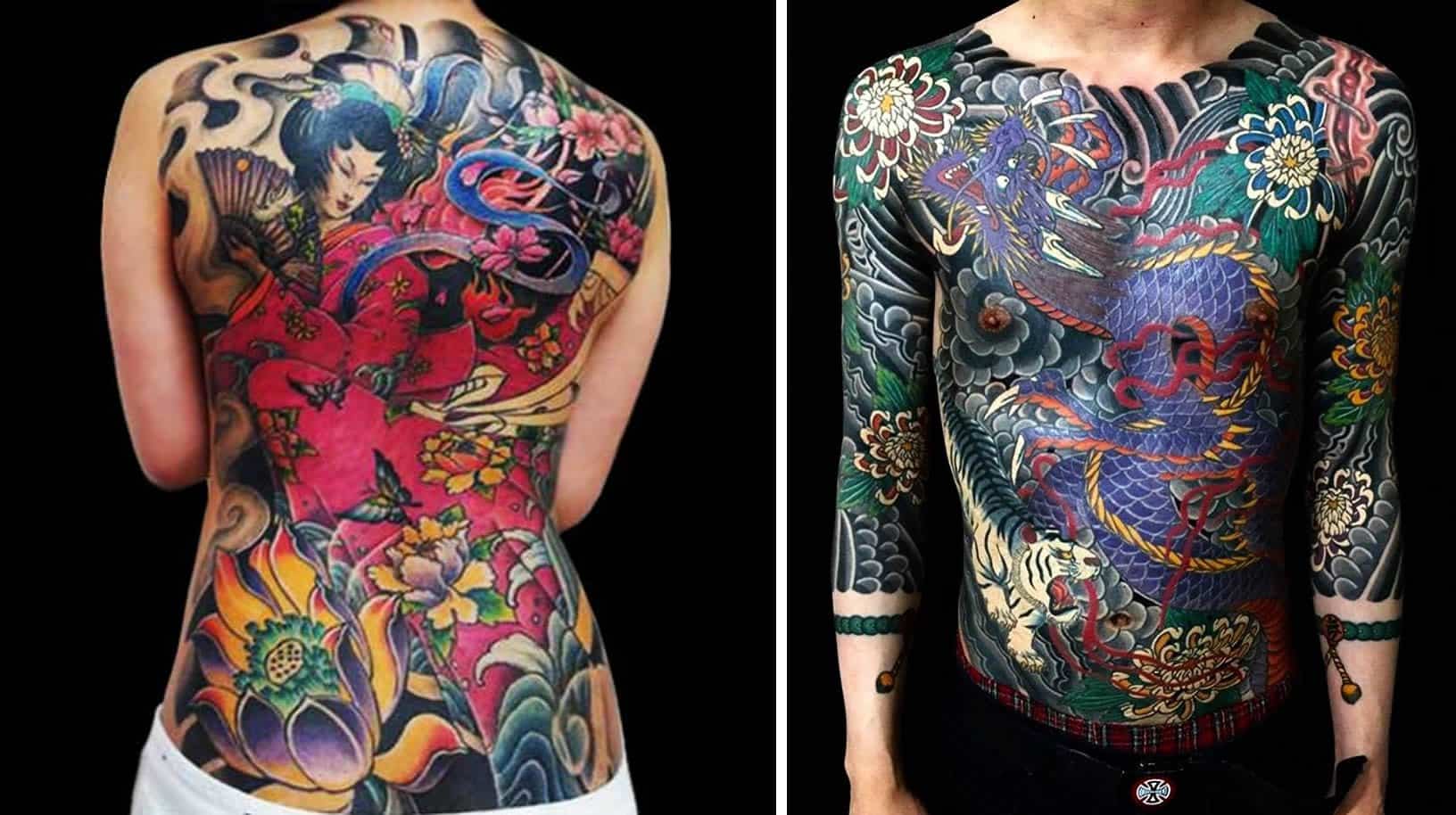 Intimately tied to the Buddhist religion, the Yakuza see the Lotus as a representation of a person’s struggle in life. And with this struggle, a person can reach full and beautiful potential. Keep in mind that the flower itself begins life at the very bottom of a pond. It then slowly makes it way to the surface and blooms. 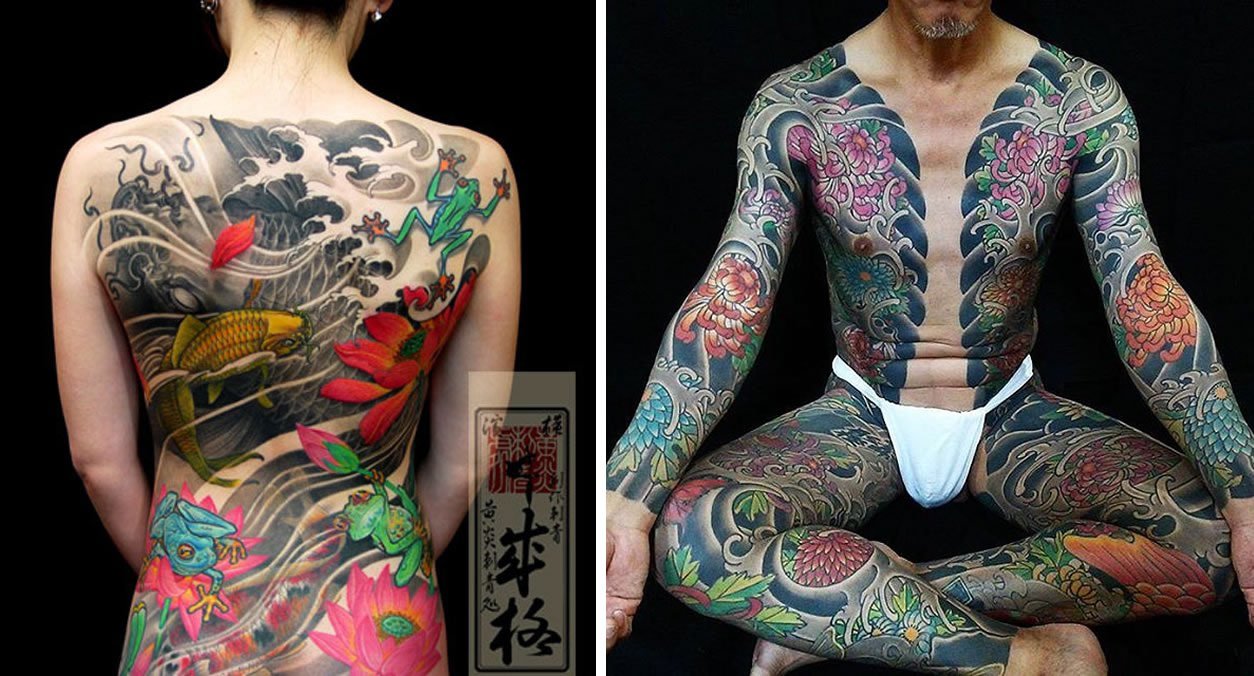 Many Japanese tattoos represent or feature elements of water. This is because the Japanese care so much about life, along with its adaptation and change. They also believe that the water symbolizes the powerful force of nature, one that no human being can defeat.