Winter season is almost near and all the kids are once again feeling the thrill and chill of playing around the snow. But more than the promise of a wonderful time under the blizzard and around the creative snowman sculptures is the threat of flu coming upon the youngsters.

As flu season comes alongside the celebration of the festive holidays, there’s nothing more helpful to parents in keeping their kids safe from illnesses than effective preventive measures. And one of the simplest tricks they could teach their kids is to always wash their hands with anti-bacterial soaps to fight the germs from lingering on their bodies.

Kids can be really stubborn though, or for some cases, forgetful. They roam around outside the house and catch some bacteria on their hands, but they neglect to clean to themselves before they indulge in their yummy snacks and meals. As an effect, they could get their immune system down when they feed with their dirty hands that are full of bacteria.

Through plain explanations, children fail to see the real importance of keeping their hands clean all the time. But a health occupation teacher at the Cape Fear High School in Fayetteville, North Carolina came up with a seemingly effective strategy of keeping the kids reminded on the need of washing their hands.

According to Boredpanda, Donna Gil Allen came up with an experiment years back on how kids will appreciate the essence of body cleanliness. She presented her class with three slices of bread where one is placed in a plastic baggy using gloves, the second with freshly washed hands, and the third was sealed in the bag after passing it around the class that made it dirty. Days after the activity, the students checked on the bread and saw convincing results.

Donna’s experiment can be deemed successful as the kids realized how germs could affect their body. Also, Birnur K. Aral, PH.D., Director of the Health, Beauty & Environmental Sciences Lab in the Good Housekeeping Institute agreed to the power of the experiment saying:

“The experiment makes a great visual illustration of the utility of soap preventing germ transfer and growth a la ‘a picture is worth a thousand words.”

Washing the hands is indeed one of the most important and effective way to reduce the risk of acquiring a disease. It is then important that kids will already develop the habit of washing their hands at their early age. So parents at home can also drill the trick into their kids’ minds through Donna Allen’s genius experiment. Many parents who read the post on Facebook were impressed with the bread experiment and suggest others to try it on their kids. See what these parents have to say below: 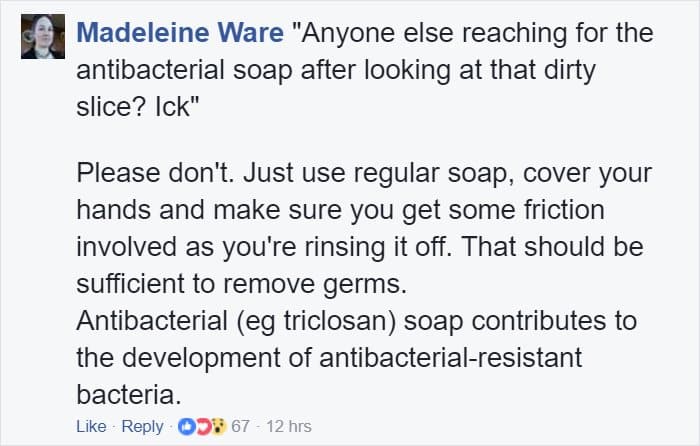