Just like everyone else whose life is connected to the internet, you are just one weak password away from having your Facebook or bank account hacked. You probably thought you will never, ever get hacked as you type in the name of your pet or the name of your favorite Star Wars character when asked for a password, but guess what?

There are lots of ways for other people to get access to your accounts and if you have a weak password, you have to say goodbye to your online security.

Tech security company SplashData released its annual list of the worst passwords that are used widely. It’s no surprise that “password” and “123456” topped the list for the second year in a row, which makes you wonder why anyone would still use that super generic password.

The company used two million passwords as sample base in identfying the top 25 phrases that are easiest to decipher, phrases that put users at higher risks of being hacked. The list includes the words “dragon”, “master”, “star wars”, and “solo”. So think twice before using popular pop culture names as passwords. 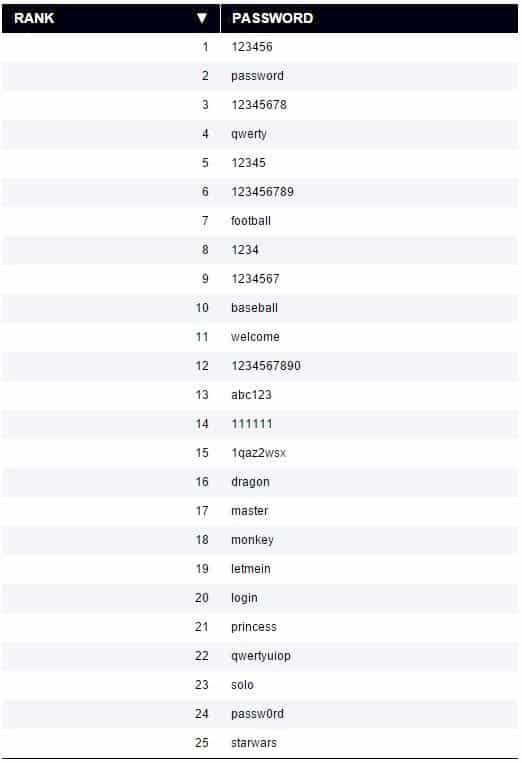 According to SplashData, using a password that consists of 12 or mixed characters may decrease the chances of being hacked.

“We have seen an effort by many people to be more secure by adding characters to passwords, but if these longer passwords are based on simple patterns they will put you in just as much risk of having your identity stolen by hackers. As we see on the list, using common sports and pop culture terms is also a bad idea. We hope that with more publicity about how risky it is to use weak passwords, more people will take steps to strengthen their passwords and, most importantly, use different passwords for different websites.”

An estimated 480 million personal data records were leaked, according to Forbes. These include major federal data breach at the U.S. Office of Personnel Management in July last year, as well as major data hacks on Uber, T-Mobile, and Ashley Madison.