If we are given superpowers, it is safe to assume that most of us would want to have the ability to read minds. In reality, however, this ‘power’ doesn’t have to be fiction – it can be very achievable. Some read other people’s minds using intuition, but there are those who do it by reading a person’s body language.

Science tells us that human beings are capable of acquiring information (around 55 percent) through nonverbal communication. This includes gestures, mimics, and body movements, among many others. Using these will allow you to unmask a person and understand what they feel or think.

Below are signals that you must pay attention to, as they can help you unravel an individual’s mystery. 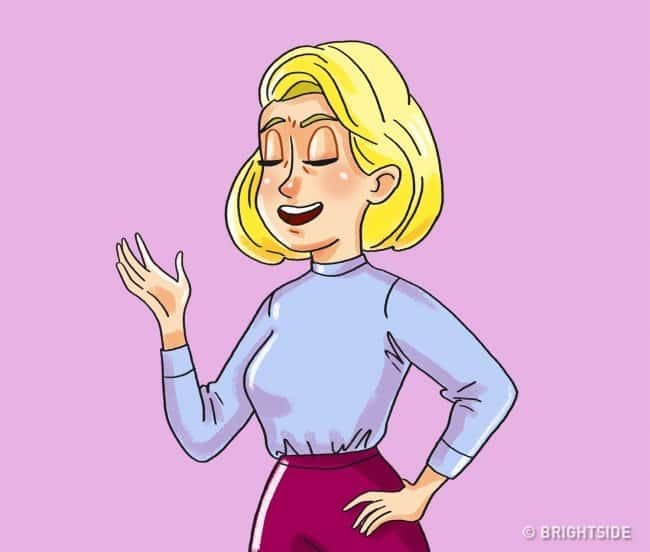 If a person talks to you while his/her eyes are closed, then it is possible that he/she is hiding something. However, it does not mean that he/she is afraid of you. Perhaps they just want to get rid of you.

#2. Covering the Mouth With a Hand 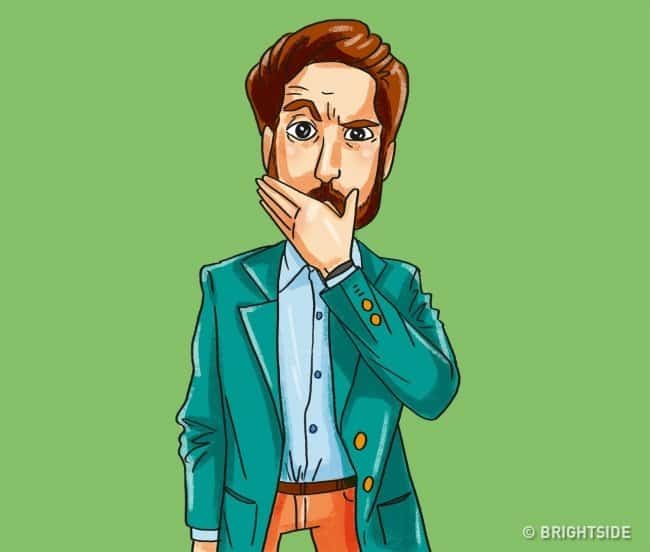 Remember that time when you did not want to tell something and you covered your mouth? This usually happens in childhood, but it does not mean it becomes rampant in adult life. It simply means that you do not want to release words that you really do not want to say.

#3. Biting the Arms of Glasses 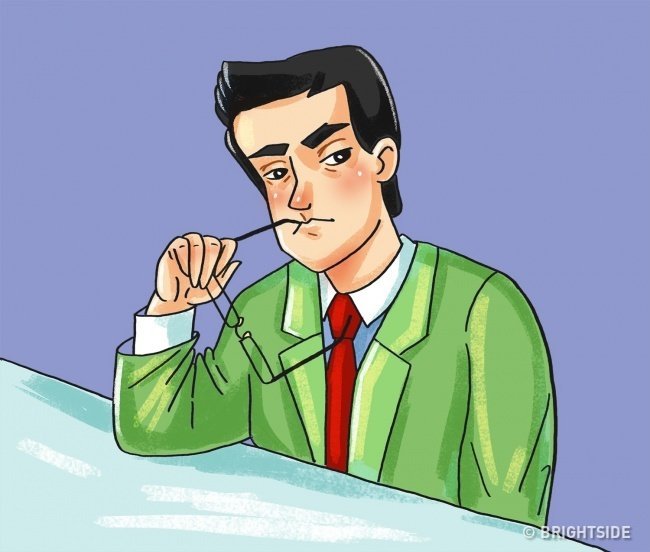 People who do this actually need a little support. It is either they are worried or depressed about something. The same notion can be obtained if they do this with a pen, chewing gum, or pencil.

#4. Presentation of the Face 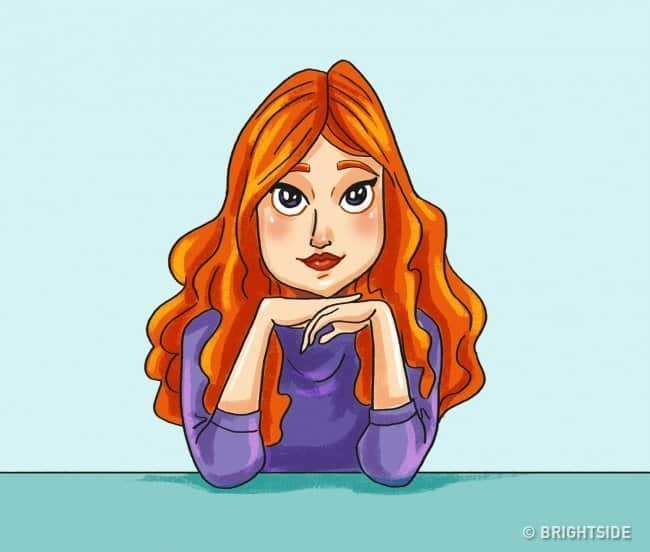 In all sense, this one here is used for attracting other people – particularly the opposite sex. It is also our way of saying, “This is me. You can enjoy as much as you want.” 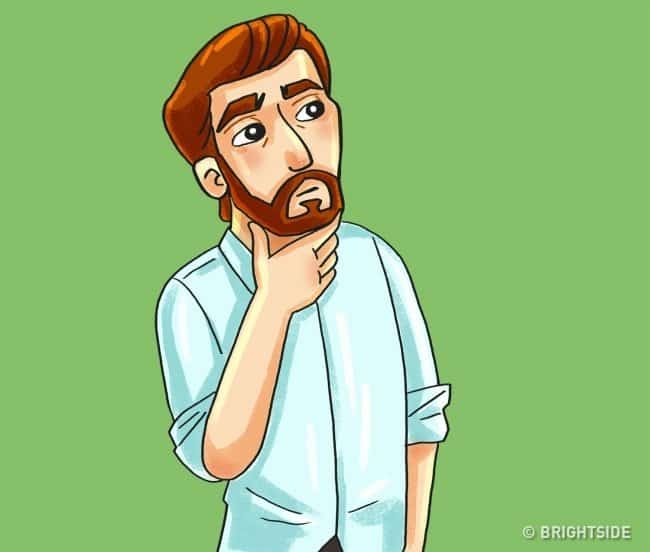 This often comes up when people try to make a decision or two. Heck, they even barely know that they are doing this. 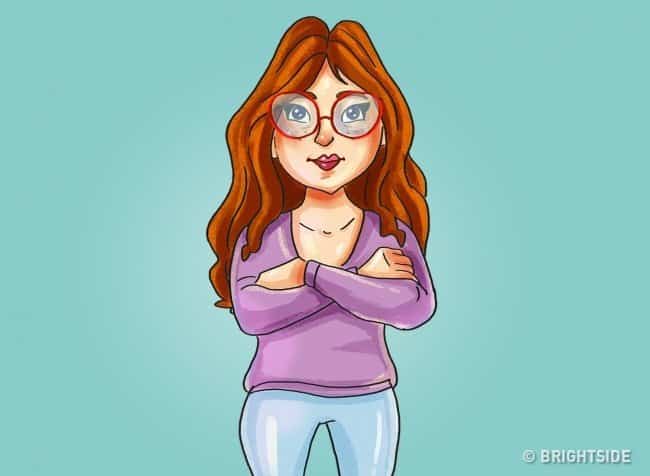 A popular one among all gestures, this one just makes a person feel more comfortable. It helps them shut themselves from other individuals, in one way or another. It is also a clear sign that a person is not just feeling well or has no interest at all. 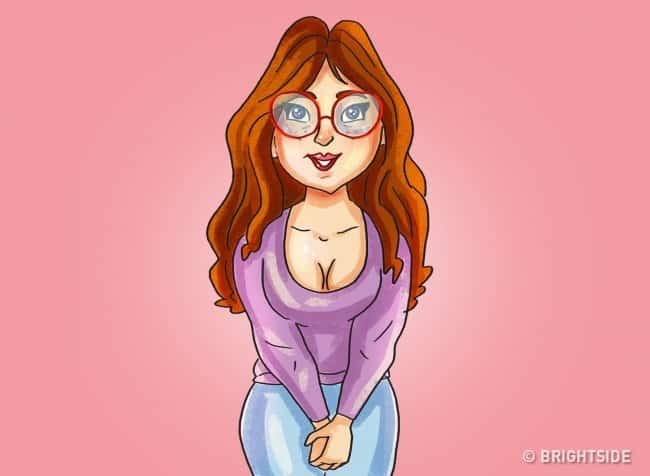 This one is more common to women. When a woman likes a man, she tries to present herself in the best way possible. You would see here often combing her hair or wearing the best dress. To put it simply, she presents herself in a way that the opposite sex gets attracted. 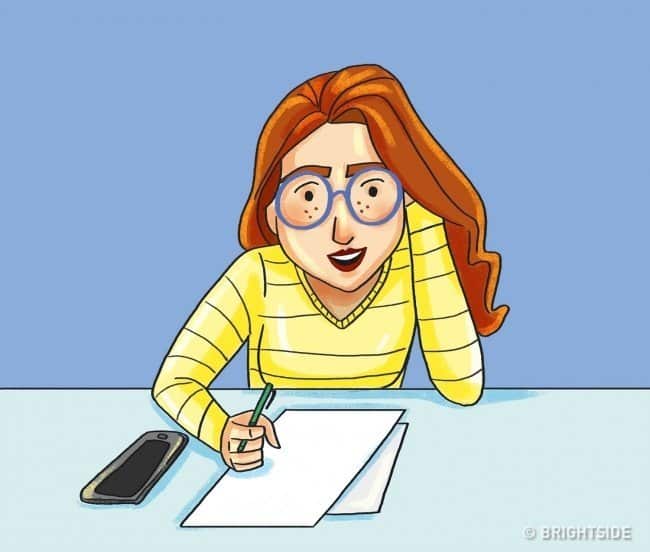 Whenever a person likes someone or tries to make contact with him/her, they have the tendency to lean forward. The legs are motionless but the body moves frequently. It is as if they are inviting the opposite sex. 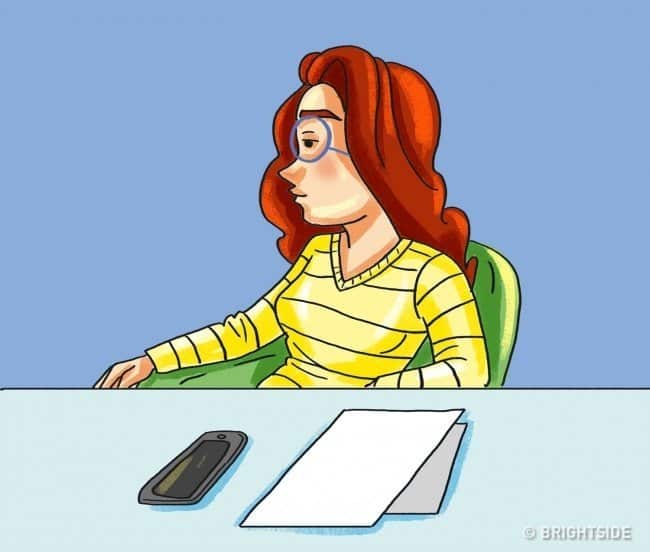 Leaning back is the complete opposite of the aforementioned. They are simply tired of the conversation and hopes to end it as soon as possible. It is also possible that they are just uncomfortable with the other person.

#10. Swinging From Heels to Toes 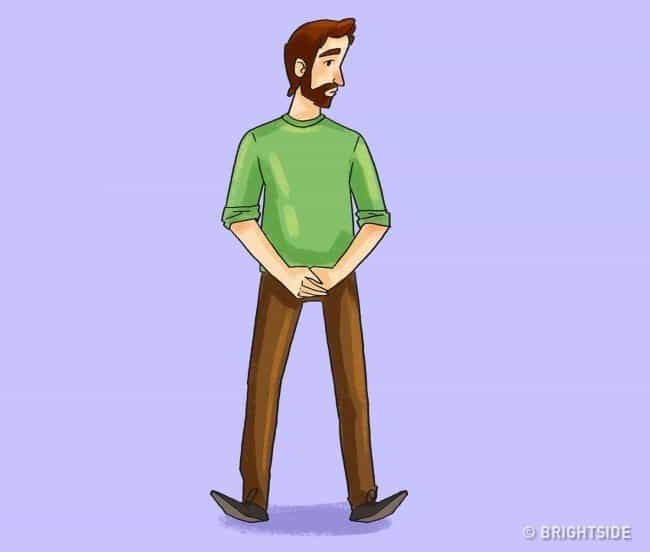 Oh, yes, it is not just the kids – adults do this, too. This shows that a person is feeling anxious about something. 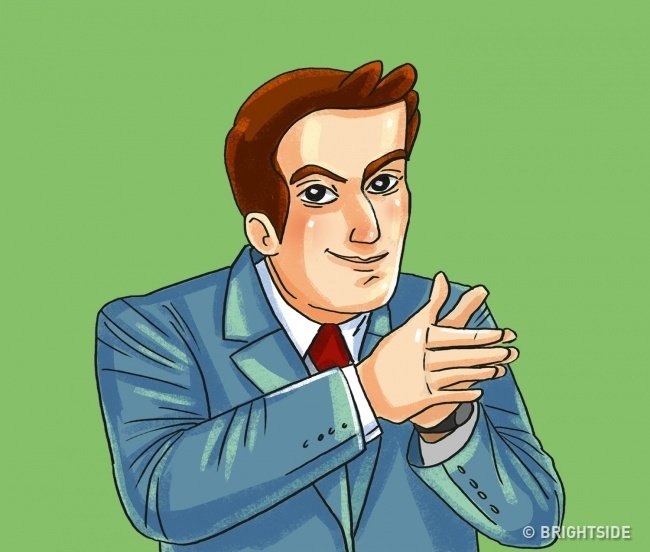 Many believe that the hands somehow broadcast what the mind is thinking. Rubbing hands could possibly mean that a person has a good feeling about something. They are also hopeful about a thing or two. 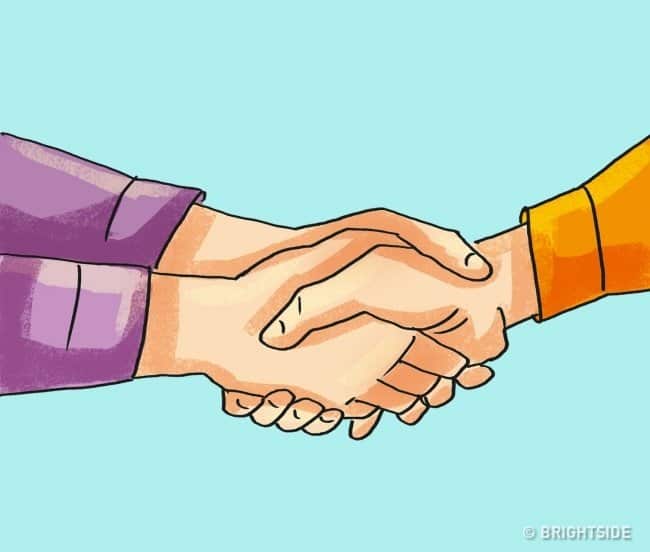 If a person takes your wrist with his/her free hand, then he/she is suggesting that you can be trusted.

#13. Handshake with a Palm Facing the Ceiling 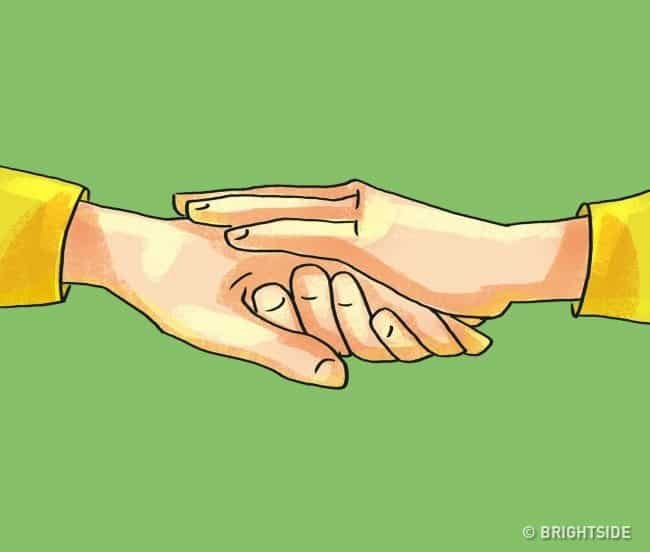 This handshake suggests that a person is feeling sympathetic about you. However, this is only true if the person does it more often.

#14. Handshake with a Palm Facing the Floor 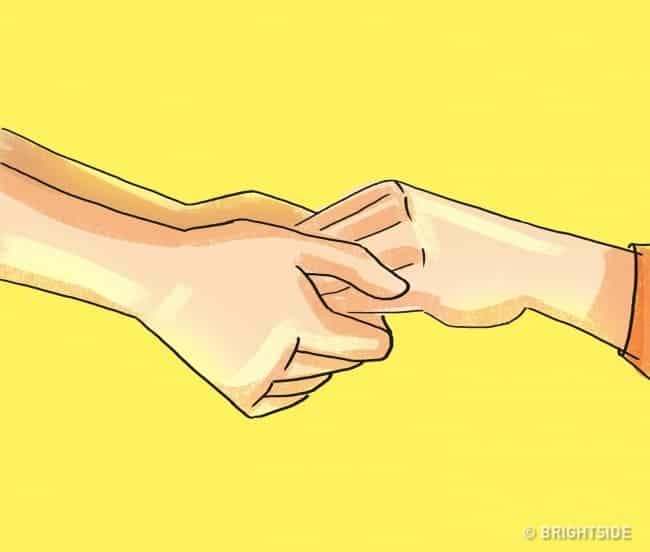 If you are holding another person’s hand from below, then you are trying to tell him/her that you are always there to help.

#15. Handshake with a Touch 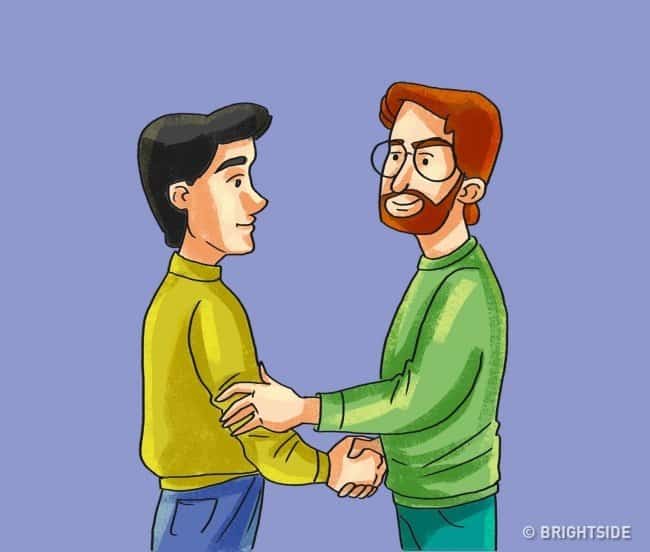 Most people do this all the time with their free hands. They can touch the back, elbow, or forearm of the other person. It only means that the need company, and the closer their touch is the more they need such. 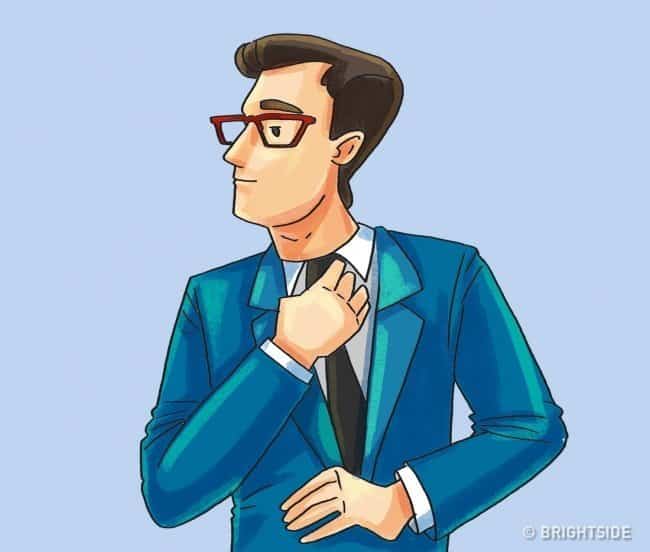 The meaning of this one usually depends on the situation. If a man does this near a good-looking woman, then it is possible that he likes her. There are also times that this gesture indicates that a person is not just feeling comfortable. Worse, he/she might request medical attention right away.

#17. Collecting Hairs That Aren’t There 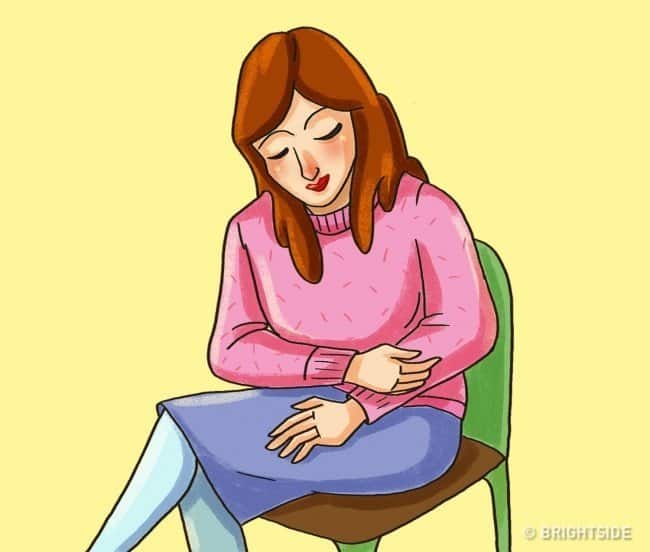 Also called displacement gesture, people often use this to express disagreement about something. But since they do not want to tell it, they resort to odd gestures like collecting hairs that are not really there. 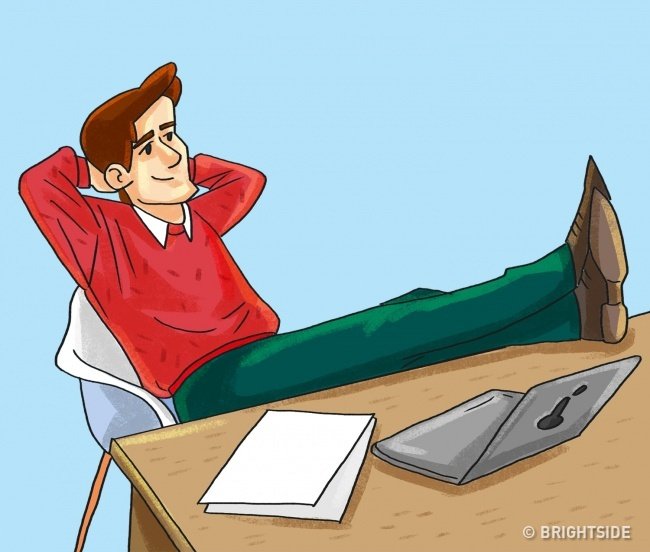 Believe it or not, such gesture actually means a lot of things. It could mean disrespect, bad manners, or that a person is trying to project that he/she is the boss. 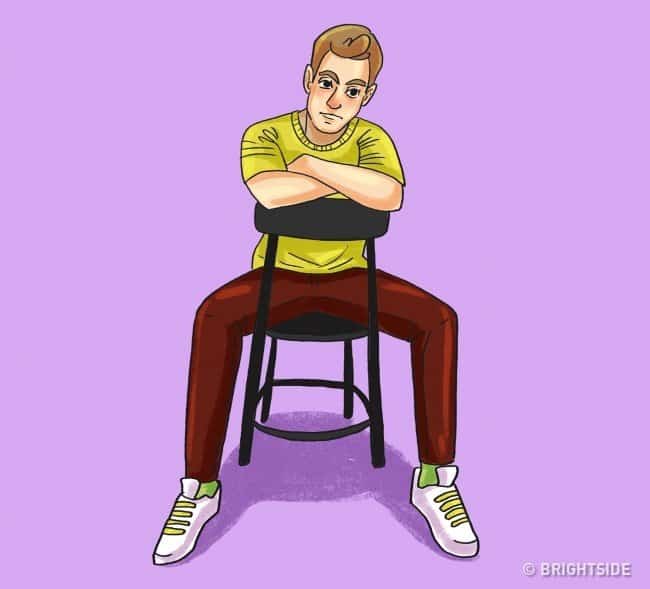 Many individuals are actually irritated by this position, as they can feel the aggression intuitively. It is why you often see this kind of position in an interrogation room where a police officer is trying to extract information from a suspect. 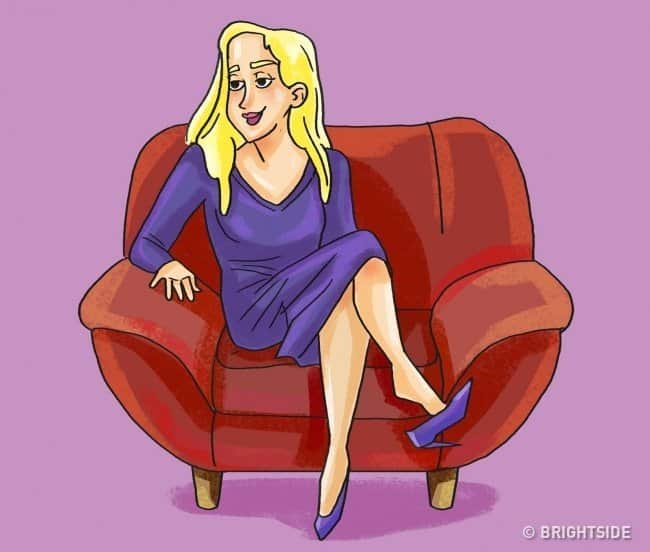 Crossed legs are, in one way or another, the most attractive position a female can do. And if a woman is doing this while playing with her shoe, then she is definitely trying to draw attention to her legs. It is sort of a green light for men. 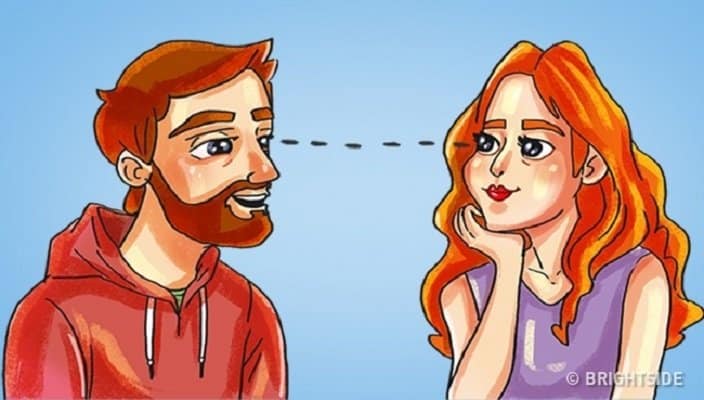 Remember that the eyes are the windows to the soul and it is always a great way of communicating. Doing so can help you read a person’s feelings and emotions, though it is usually possible if and only if you really pay attention.