The GoPro is one of the most popular action cameras around, and is useful in taking extreme action videography even without the use of hands. It has been used in a lot of situations like taking sports photography, as well as attaching it to pets, bikes, airplanes and underwater equipment to capture images and video from different points of view.

A family tried out a new point of view recently by attaching a GoPro to their toddler’s head and hiding from the child while they played a game of hide-and-seek.

Dan Iverson strapped his GoPro on his young child’s head, while he and his wife secreted themselves away, giggling madly and monitoring the live feed from their phones as their young one ran from room to room looking for them.

Unsupervised, and carrying what may have seemed to be heavy equipment strapped to the head, the toddler went from one area to the other on the second floor of their two-storey home, while Iverson and his wife remained in hiding.

For one scary moment, the top of the staircase…without a child safety gate…came into view, before the toddler moved on from messy room to messy room looking for the absentee parents.

That’s an unprotected staircase right there…

Fortunately, the family dog Ollie, taking pity on what may have been a panicking child, led the toddler to a wide closet which opened to reveal the laughing mom and dad.

The “traitor” Ollie outs the culprits…

Can you just imagine the relief of this child? 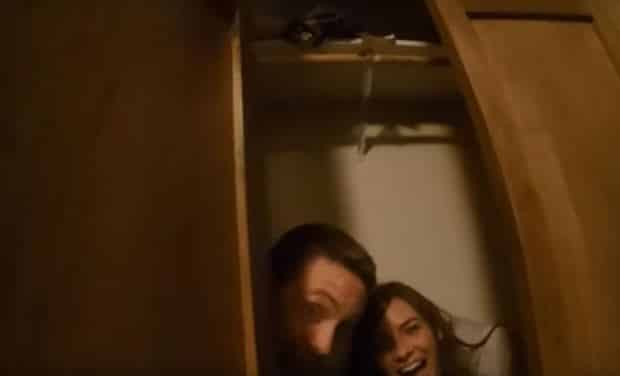 It was a stroke of good luck nothing bad happened to the little one during the moments the parents went “missing.”

The video has since amassed over millions of views on YouTube, and it is likely the child will never forget that momentary feeling of scary abandonment from having “lost” mom and dad, particularly since no one else appeared to be at home during that time.

Good thing the dog was there to save the day…

Would you tie a heavy camera to your toddler’s head and prank him into a panic by staying hidden in an otherwise empty house?