You think you saw the worst of 2016? Apparently, not! Mariah Carey just might have given us the worst performance of last year with a series of “technical malfunction” during her appearance at ABC’s “Dick Clark’s New Year’s Rockin’ Eve 2017.” The diva seemed prepared to lip sync her way out of her performance. However, most of the vocals for her song did not play.

>Mariah Carey appears to be flustered during her New Year's Eve performance. 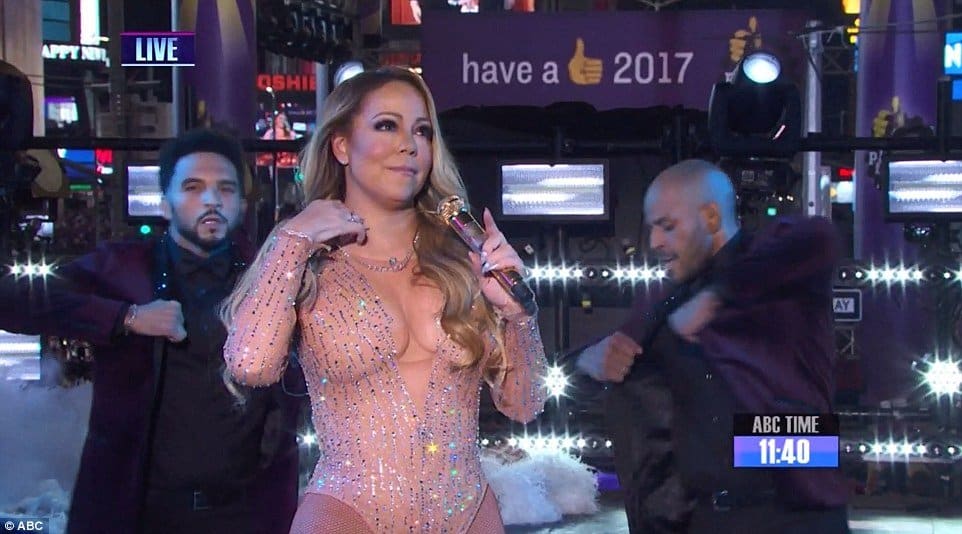 Mariah tried to play it cool at first by rounding up the crowd and encouraging them to sing instead. She told the audience that they were unable to do some sound check prior to the show, thus the glitches. She even did some of her dance routines but ended giving up and just furiously walked off the stage.

Shit happens 😩 Have a happy and healthy new year everybody!🎉 Here's to making more headlines in 2017 😂 pic.twitter.com/0Td8se57jr

She, however, did not escape the wrath of netizens. Minutes after her botched performance, the keywords “Mariah Carey” trended worldwide on Twitter with people trashing the diva’s meltdown on stage.

One twitter user said that people shouldn’t feel bad for Mariah Carey since she was paid millions for her performance and pathetically resorted to lip syncing.

Another netizen made fun of her “I don’t know her” line directed to fellow singer Demi Lovato during their online and on air bickering, last quarter of 2016.

Meanwhile, others credited Mariah Carey for saving some of the worst performances of other artists in their lifetime.

Ohio State should thank Mariah Carey. They no longer have the worst performance of the night.

Even Milli Vanilli is embarrassed by Mariah Carey's debacle. pic.twitter.com/8179cHu7jA

Although most people think Mariah Carey was supposedly lip syncing, her representatives issued a statement that it was a mere production issue and the diva had no way of continuing her performance.

Mariah Carey is no stranger to epic fail performances, though. During NBC’s 2014 live broadcast of “Christmas in Rockefeller Center,” she sang a messy rendition of her own song “All I Want for Christmas” while struggling to reach some notes and avoiding some high notes altogether.

So what’s your take about this, guys? Hit us up in the comment section and let’s talk about it!