Most people would see mental illness as a serious disorder. Some would even stay away from the mentally ill, thinking they might suddenly go violent. This misunderstanding has sadly become a fact for the past couple of decades, making those who suffer feel like outcasts in the society.

What we certainly don’t realize is that what these “special” people really need are acceptance, patience and understanding from those of us around them. But these people are also blessed. They may not have it all but they have things about themselves that they can also boast about. For instance, their strength to face a world that criticizes them and another is their talents which are surprisingly admirable.

To prove that, an 18-year-old lady stepped forward to talk about her schizophrenia and her coping mechanism.

Kate Fenner was already 17 when doctors diagnosed her with schizophrenia. 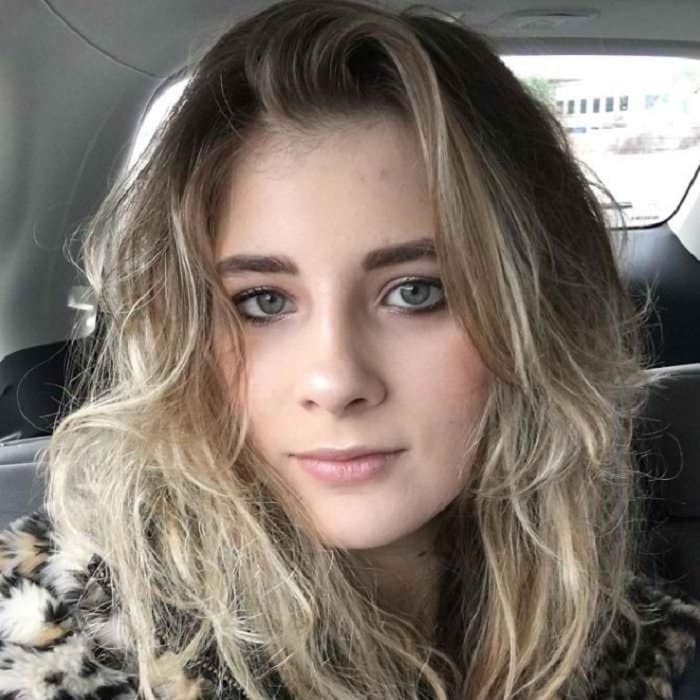 Since diagnosed with schizophrenia, Kate started to use her art to deal with it. 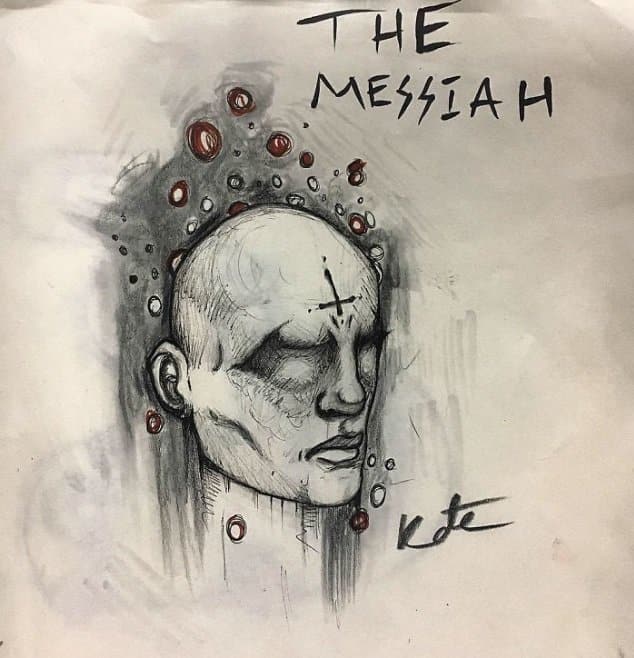 Kate experienced hallucinations and has started putting them into drawings which she said is her way to cope with them. 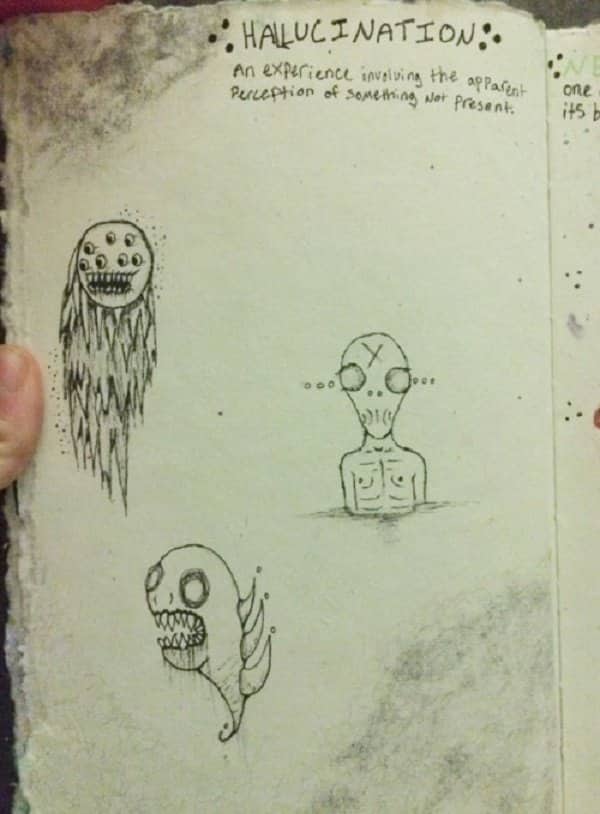 Kate has been diagnosed with schizophrenia when she was 17. This comes after her conditioned was given several labels until her parents noticed her mental health was not getting any better.

Unlike others with the same condition, Kate sought to break the stigma and showed the world that she is capable despite her condition. As soon as mental health experts saw her situation and her hallucinations becoming worse, Kate used her artistic skills to illustrate the images she sees and tried to deal with them. 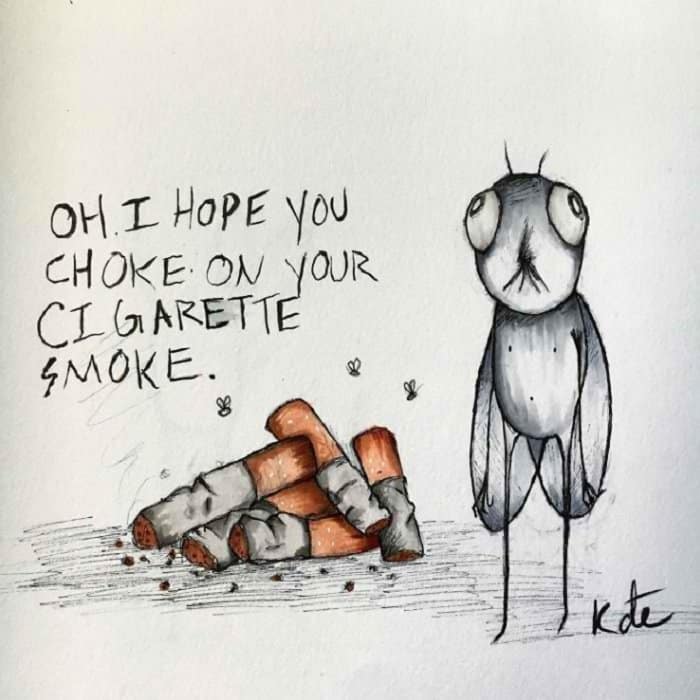 She would also often see disembodied eyes crawling through the ceilings and walls. 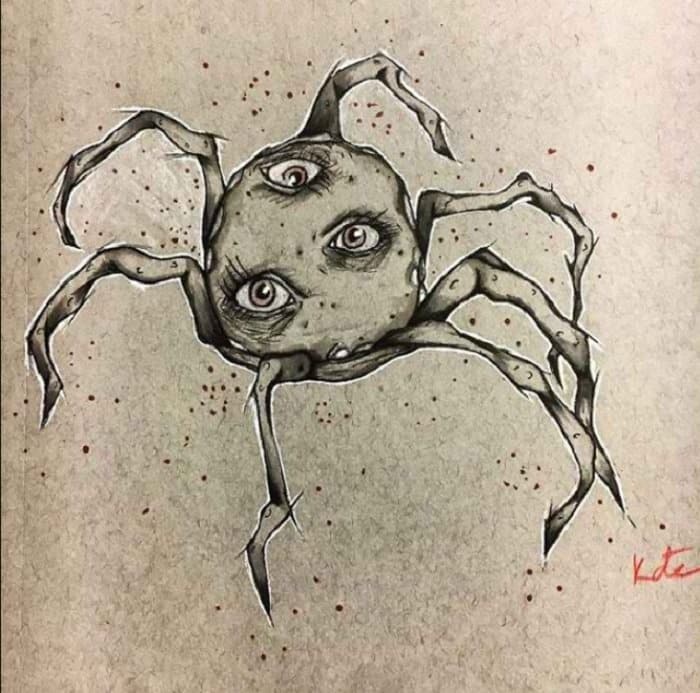 Apart from seeing things, Kate would also hear noises and voices whose sources she also tries to draw. 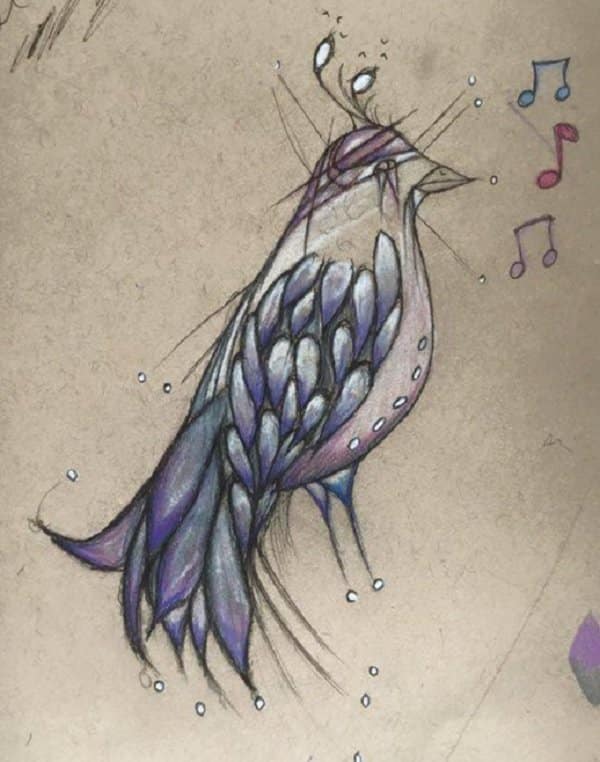 The voices that Kate hears would at times ask her to set things on fire. 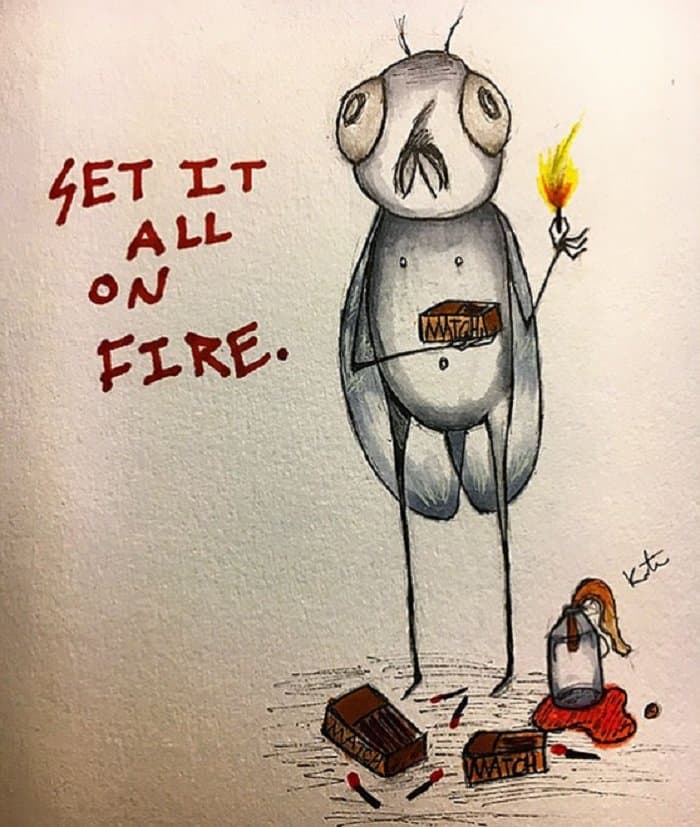 According to Kate’s article on BoredPanda, her hallucinations were never simple. She shared how she hears voices, random voices and sees bugs, faces and even disembodied eyes. Among the images she sees, bugs are in most of her hallucinations which adds up to her depression as these creatures make her feel worthless like a fly. She says these bugs, for her, are the representations of her so-called illness. Kate revealed how her self-esteem shoots down to its lowest and would always wish she could shapeshift into someone “prettier.”

Kate would also see an abstract of herself when she looks into the mirror. 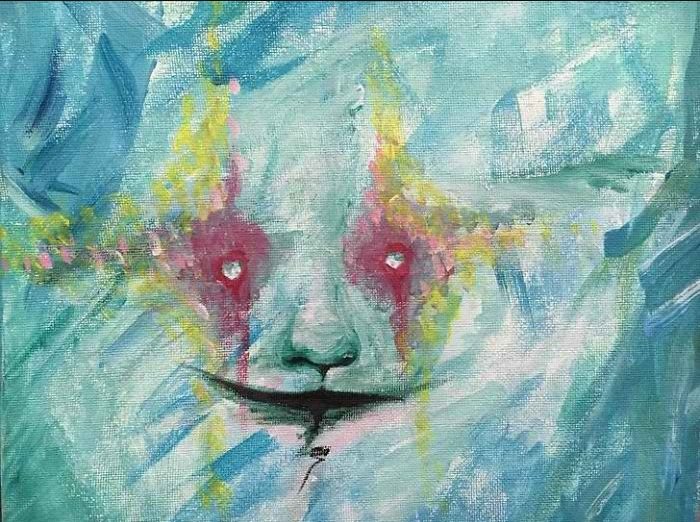 In some instances, Kate sees disembodied eyes with odd circles around them. 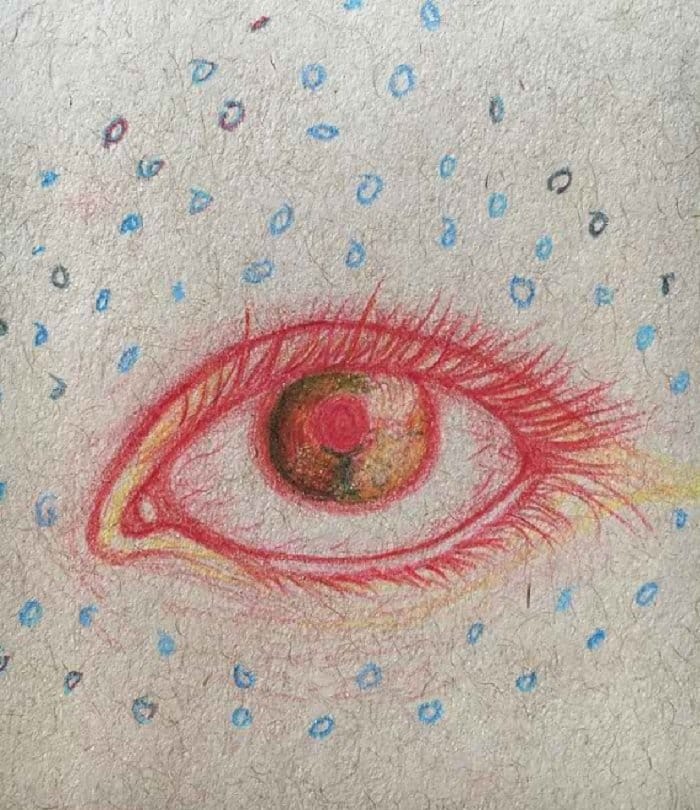 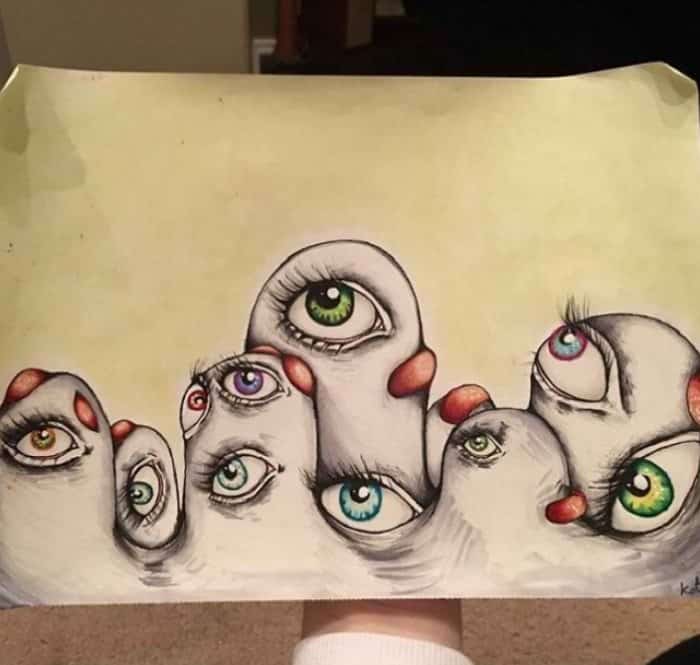 Now, she’s able to have a more positive perspective about her schizophrenia and opts to be more open about the condition she lives with. She aims to break the stereotype spread by inaccurate information portrayed by Hollywood films. Kate hopes people to recognize her, as well as many others who have the mental disorders, as there are people who are suffering from more severe level of schizophrenia. Nonetheless, Kate feels grateful that she is able to cope up with her disorder.

For Kate, organization, communication, paranoia, depression, anxiety, and managing her emotions are the biggest struggles she face. 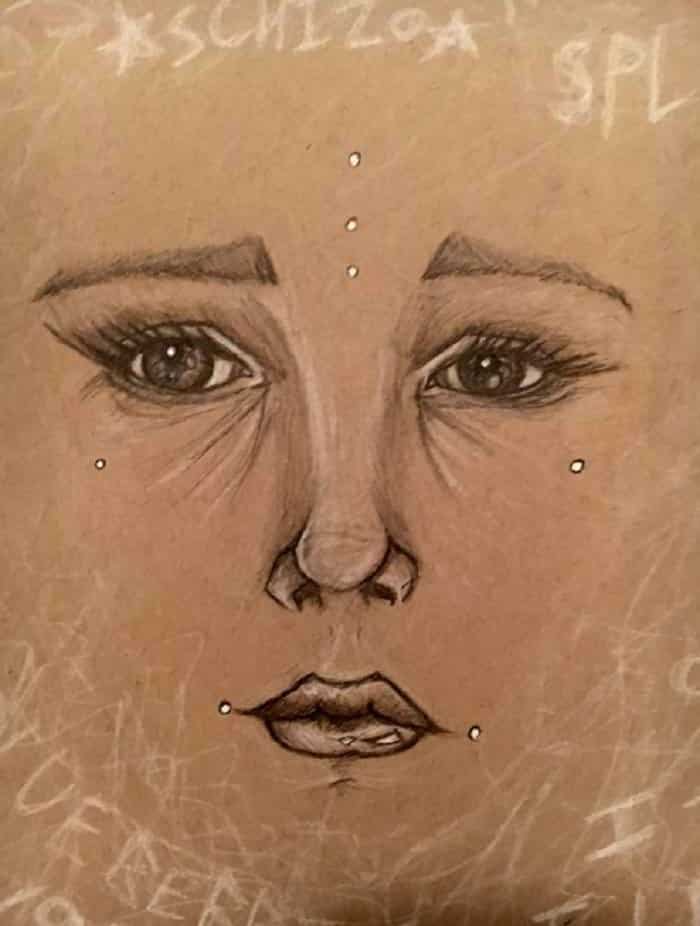 Kate has a wish to turn into a “prettier” person and make people see her worth. 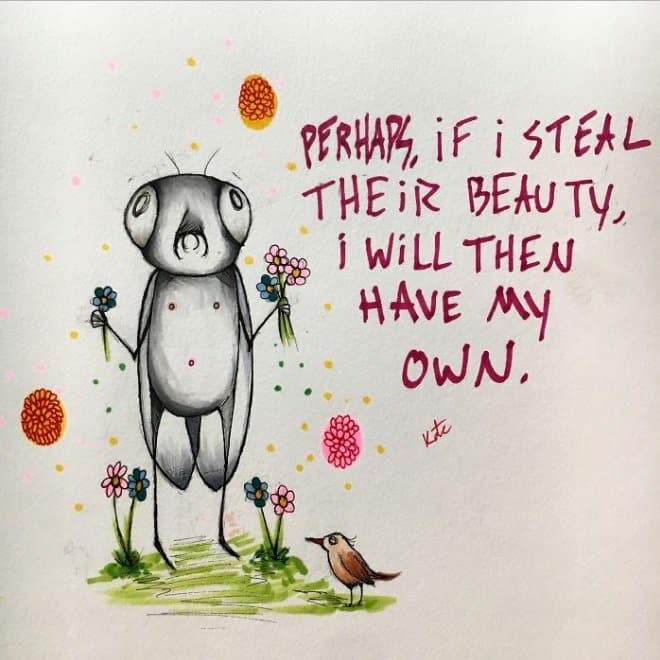 For more of Kate Fenner’s artworks, you may check her out on Instagram.