Is it just a trick or a real supernatural event that struck this woman from India? Normal people usually become greatly irritated when sweat or acne come out from their skin. But once they find out what comes out of this woman’s body, they might be thankful enough not to experience the same weird situation.

Anusuiya Devi from a small village in Fatehpur district of Uttar Pradesh, Northern India claims needs, pins and Syringes come out naturally out of her legs. Doctors who checked on her case were scratching their heads after finding 70 of the sharp objects inside her limbs!

This woman claims needles and other sharp objects just started to come out of her body. 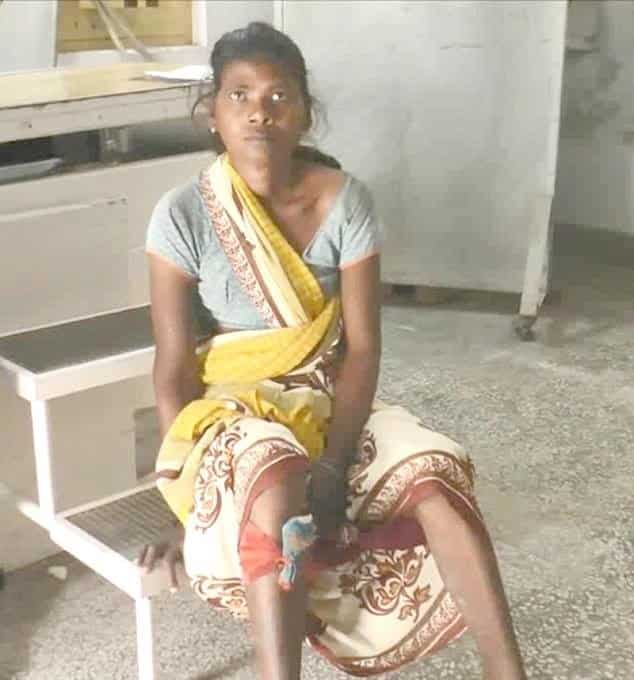 Anusuiya’s legs are full of scars from exploding pimple-like bumps which she says are actually needles and pins. 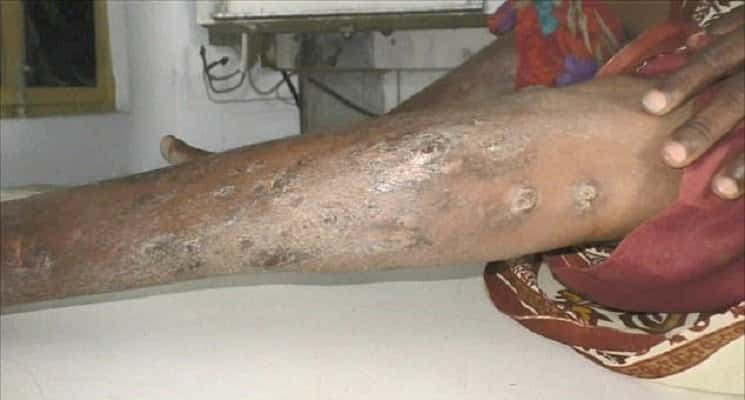 The 35-year-old woman said needles started appearing in her legs since 2012. For over five years, Anusuiya has been dealing with excruciating pain from her bizarre condition and since had difficulties in walking, sitting and standing. She is now begging medics to help her solve her problem and free her from the unexplainable situation she’s trapped in.

Experts are however doubtful on the legitimacy of her claims. Medics believe that she must be inserting the sharp objects herself. The widow denied their assumptions and said she has never considered harming herself. Anusuiya said:

“I’ve had this problem for five years. Needles just come out of my legs.
I have no explanation, I have no idea how they get in there and I’m fed of the constant pain now.
Doctors say this is some kind of sickness but none of them seem to be aware of it. I just want someone to help me, I am in pain every day. I want it to stop.”

As soon as she went for a check up, doctors found more sharp objects inside her body. 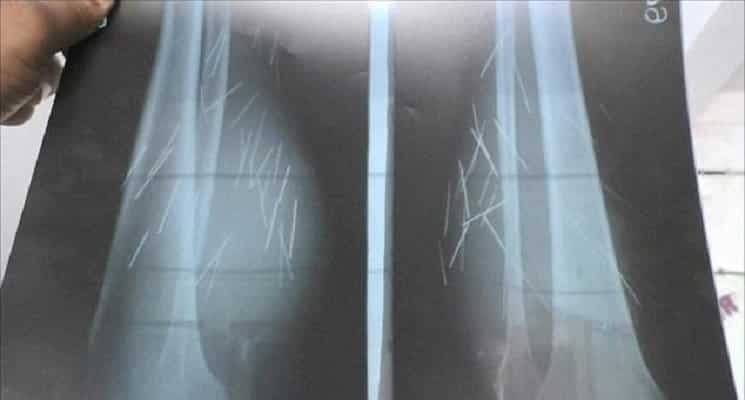 Medics say Anusuiya hs been self-harming which she denied. 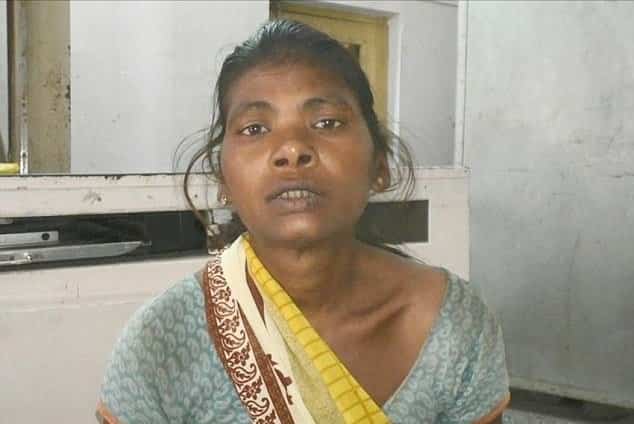 The woman with legs of needles and pins said she initially noticed small pimples on her legs five years ago. Eventually, they grow bigger and when they burst, needles or nails were discharged instead of puss.

Anusuiya’s brother, Awadhesh Kumar, also believes that her claim is true. Since living with his sister seven years ago after Anusuiya lost her husband, Awadhesh said she does not self-harm and does not do anything to her legs. He said:

“It has been five years now and she’s in so much pain every day. I am really stressed for her.
There are three kinds of needles that come out of her body; nails, needles and syringe needles used in hospitals. We have no explanation.
I’m with her most of the time, and I’ve never seen her do anything to herself which would explain this. We just want someone to help us.”

Anusuiya’s brother supported her claim and said she would never harm herself. 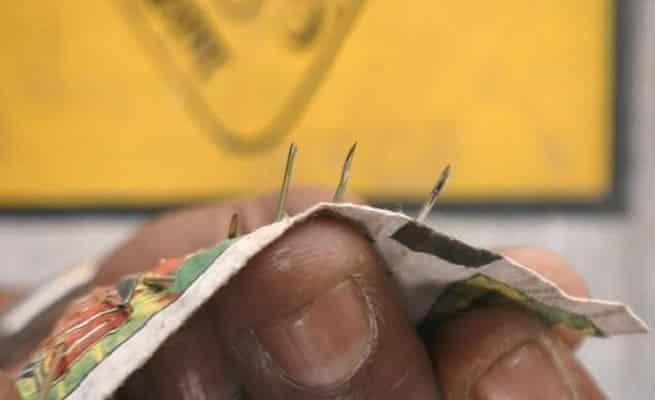 The woman has been suffering for years from the pain she feels when pins come out of her body. 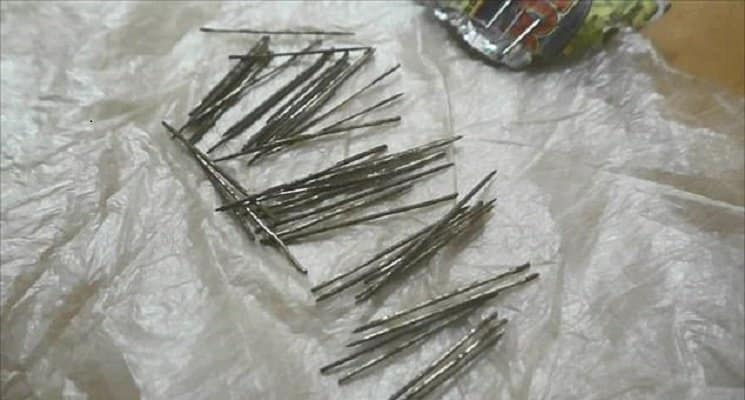 Anusuiya already went to several local doctors in their area, but none of them could help or even give a valid explanation to her condition. Awadhesh continued to relay:

“They all said she was ill but none could understand her condition. They just sent her away.”

It is a never-before seen case, but on October 25, Anasuiya was finally admitted to a district government hospital in Fatehpur. Doctors were left in shock by her X-ray images.

“She came to us in a lot of pain.
We did several X-rays including full body X-ray and we found 70 different kinds of iron needles in her legs below the knees.
We did a full body scan to see if there were nails in other parts of her body but there was nothing elsewhere. We only found needles in her legs, nowhere else.”

The doctor explained that it was completely impossible to develop needles inside the body. Hospital staff cannot yet confirm how the sharp objects got into Anasuiya’s body, but like other medics, they suspect the woman has been self-harming.

The siblings are now asking for help from doctors for Anusuiya’s condition. 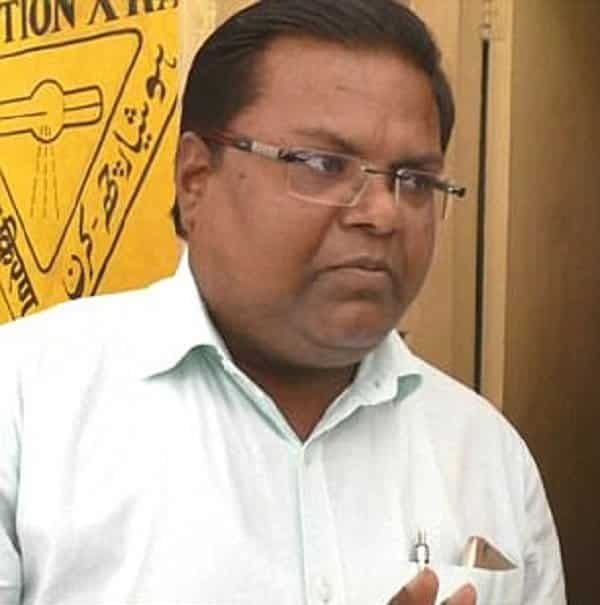 She ws already admitted to a hospital but Dr. Vishal will have to check on her mental health s he also believes that she forced the pins inside her body. 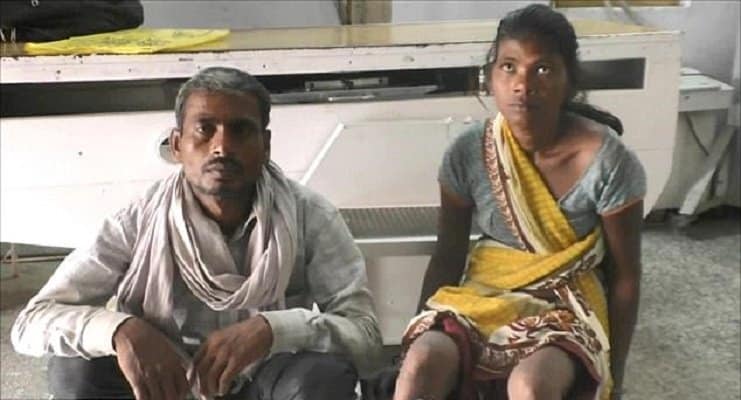 To come to the root of Anasuiya’s problem, doctors said they need to test her for any kind of a mental illness. They will also investigated if she forcefully inserts them in her body. Dr. Vishal continued:

“I have never seen a case like this in my medical career. We spotted so many needles in her legs, we cannot understand how she’s coped with the pain for so long. She will have suffered greatly.

I am speaking to higher authorities and other doctors about her situation. And we hope to refer her to Kanpur where more qualified doctors could possibly research her condition and help her deal with this problem. We will certainly do all we can to help.”