Klay Thompson headed straight to his “Shock the Game” tour with his shoe sponsor, Anta, in China after winning the NBA 2016 – 2017 season championship. He might wish though that he never had to after his first day of stay turned out to be a total embarrassment. The famous Splash Brother of another NBA superstar, Stephen Curry, was caught on camera trying to make a dunk – twice — where he ended up dunking not the ball in the ring but himself on the ground.

Over the weekend, a video of Klay Thompson’s epic dunk fail started to go viral online with already over half a million views on Youtube after just a day of posting. Viewers were quick to criticize the star and took to social media sites to discuss the event.

The recording that apparently started to make a hit in China’s Weibo features Thompson making two dunks. Although his first shot can be considered a mere miscalculation, his second attempt cannot be taken as another “miss” according to commenters.

The highlight was when Thompson came swirling around the ring to complete a 360 degree dunk after his first fail, but ended up rolling into the ground. While it is very obvious in the video that the audience were already laughing hard after witnessing a great NBA star fall to the stands, the host of the live event was quick to spare him a little pride saying: “It’s okay, it’s okay, it’s okay. I think he just needs a break.”

Klay should be given an applause though for staying cool. He was quite good at diverting the audience’s attention by immediately standing up and heading straight to the crowd to give away a ball with his signature. 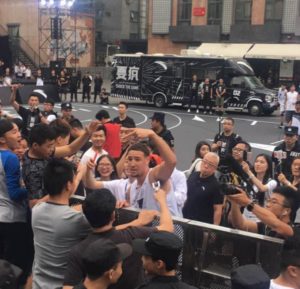 But his self-redemption was quite short-lived as he made several other shooting fails during his game with some Chinese players that went down after the shooting exhibition. The host even commented: “Again?”

It might be painful for an ace player of the year’s proclaimed greatest NBA team to become a laughing stock at the moment, but Thompson is still fortunate to avoid physical injuries. Scratches to his pride might, however, linger for a little while as NBA enthusiasts are not letting the humiliation slip, and there is also a shoe sponsorship to worry about as the epic fail happened in their territory.

Days after the event though, reporters present during the event explained Thompson’s shocking flaw. Insiders said that the NBA star just landed from hours of plane ride when he went to the Saturday ball exhibition, hence his jetlag is at fault. 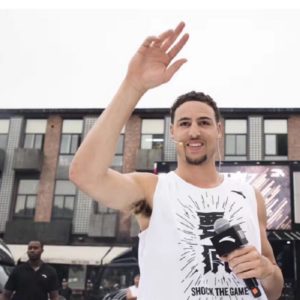 Klay Thompson has been regarded as NBA’s one-of-the-bests with two championships already under his record and even nabbed a three-point contest champion title in 2016. Although he was never actually known for being good at making dunks, it was also not expected that he could be so lousy in doing the famous basketball shot.