Do you still remember the bags you used for school when you were younger? Did you have those fancy bags with catchy kiddie designs? Did you choose the bags yourself or did your parents simply bought it for you?

Whatever your answers may be, consider yourself lucky compared to the young boy whose picture recently went viral online.

As you can see on the image, this student is so poor his family couldn’t even afford to buy him a schoolbag. And so he uses a cardboard box to carry his school stuff instead.

Without a schoolbag, this boy uses a cardboard box instead to carry his stuff to school. 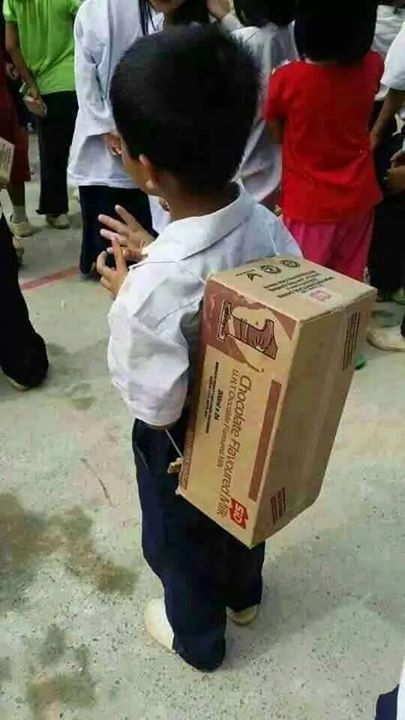 The moving photo was taken by Diwata Socrates and has been a source of discussion for netizens across the globe.

Many were inspired by the boy’s desire to keep studying despite the difficulties of life. Compared with other kids who refuse to go to school unless they have new clothes and school supplies, this boy is a great example of persistence and determination.

Some commenters on social media have also expressed great interest in helping the boy, saying they would either donate a bag or would help him out with his school-related expenses. Others admitted they were in tears after seeing the boy’s picture.

Many people have been touched by the powerful message relayed by that single picture. There’s really no stopping a student who wants to go to school – even if he doesn’t have his own schoolbag.

Were you inspired by this little boy’s photo? Do hit us up with your comments below. Also, feel free to share this post on your social media. Any student, young or old, needs to see this one.