Global warming and climate change are really serious issues that plague us. From the overload of non-biodegradable plastic wastes and the threat of depleting fuel, we must always look for innovative ways to solve these impending problems.

Good thing these issues are being tackled by some independent startups in the Netherlands. Two different groups are revolutionizing the ways that we will build our roads in the future. Introducing the SolaRoad of Krommenie, Netherlands and the Plastic Roads of Rotterdam. Read on and be inspired by these awesome Dutch innovations. Way to go Netherlands!

Come to think of it, all the roads and highways in the face of the earth surely stretch a thousand miles and imagine these perpetually exposed to the sun during daytime. Even if let’s say that there is a traffic jam and cars overshadow the roads, there is still a considerable amount of time that these roads catch sunlight. Now what if all that sunlight is converted to usable solar energy? That is exactly what the makers of SolaRoad were inspired to do.

A project of companies like TNO, Imtech, Provence and OOMS, the SolaRoad consists of your regular asphalt concrete roads but with a glass top layer. Beneath the glass are solar cells that catches the sunlight and converts it to electricity. The electricity can then be fed to a module back to the common electric supply for the residence area, or to power lampposts and many more. A prototype road measuring 100 meters is already built in a town in Krommenie, Netherlands. On November 10, 2015 they have reported that the road has produced 9800 kwh of electricity during its one year of operation. The said electricity generated is enough to power 3 houses all year round. And that’s using only a 100 meters of road!

Aerial view of the SolaRoad in Krommenie. As of now it is only open for walking and biking purposes. 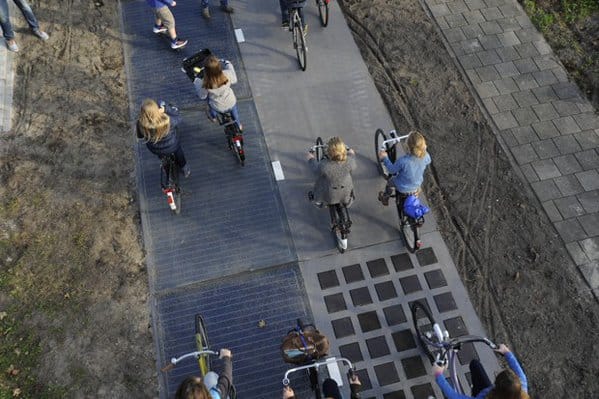 Further research is being conducted to make the SolaRoads more efficient in catching and converting sunlight for electricity as well as making it sturdier to withstand the weight of heavier vehicles. But the advancements in this is truly great news for all environmentalists out there!

Here’s a video explaining the SolaRoad