An online dictionary defined tar as “a dark, oily, viscous material, consisting mainly of hydrocarbons, produced by the destructive distillation of organic substances such as wood, coal, or peat.” Now close your eyes and imagine that there is a hot pool of this offensive material in front of you. Conjure up the image of a dog, give it a hard shove so it’ll fall into the hot tar. Get the picture?

Falling into a pool of hot tar is no joke. So just imagine the kind of trauma that this poor five-month-old dog went through when it fell into a pool of hot tar that was spilled around a construction site in the northern city of Udaipur in India. Fortunately, a passerby spotted the dog and called the animal welfare group, Animal Aid Unlimited. The dog was lying on the ground, hardened like rock, when the rescuers arrived. They massaged the dog’s body with vegetable oil so they can pull its body out of the sticky pit. It took about four hours to rescue the poor dog from the tar pit. It was then brought to the animal shelter.

“There was no way he could have come out of his own, without any intervention,” said Claire Abrams, a staff from Animal Aid Unlimited.

The poor dog was covered in hardened tar, which almost turned it into a rock. 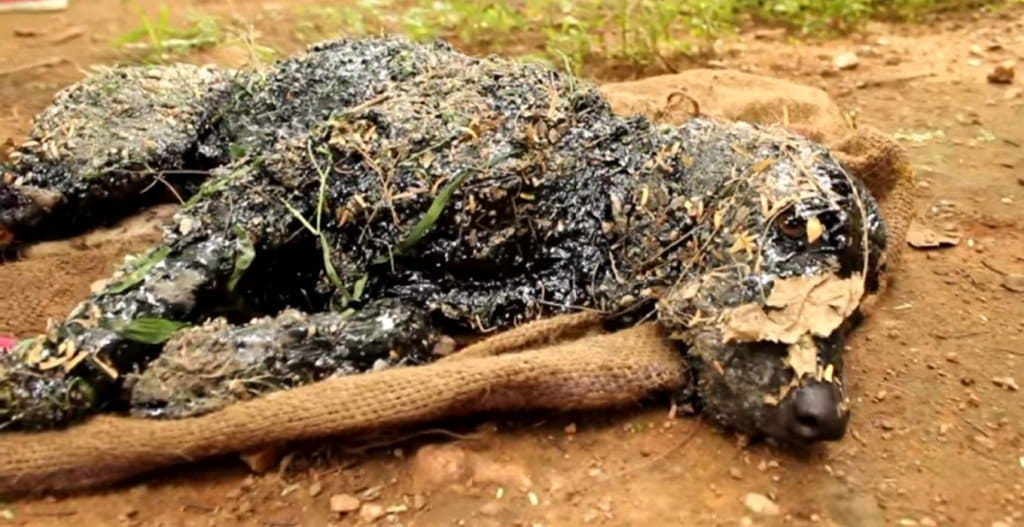 According to Abrams, the poor dog was petrified and was breathing heavily when it spent its first night in the animal shelter. It took several days before the tar was completely removed from the dog’s body. In the following video, you will see that the dog’s body was fully covered with tar. The dog, who is now fondly called ‘Tar Baby’, has recovered fully.

Thanks to the kind passerby who did not turn a blind eye and to the staff of Animal Aid Unlimited, ‘Tar Baby’ can live a full life.