Personal accounts about people’s honesty are among the most well-received stories on social media. We loved the story about the security guard who returned a bag full of money. Then, there’s the one about a taxi driver who returned his passenger’s forgotten valuables. Of course, there’s also the tale of the trustworthy hotel room attendant. However, we have to accept the fact that not everyone is honest. One example of this is a man who sneakily hid an envelope full of money after a restaurant supervisor accidentally dropped it inside the establishment.

It goes to show that while honesty may be the best policy, but it’s definitely not everyone’s first instinct.

Facebook users CJ Yerba and Bhordz Policarpio shared closed-circuit television (CCTV) video clips from a restaurant in the Philippines. It was revealed that a male customer who was eating there with his family saw an envelope full of money fall out of the pocket of a female restaurant supervisor.

The man gets up from his table to go to the other side of the restaurant.

Here's the moment when he saw his "target." 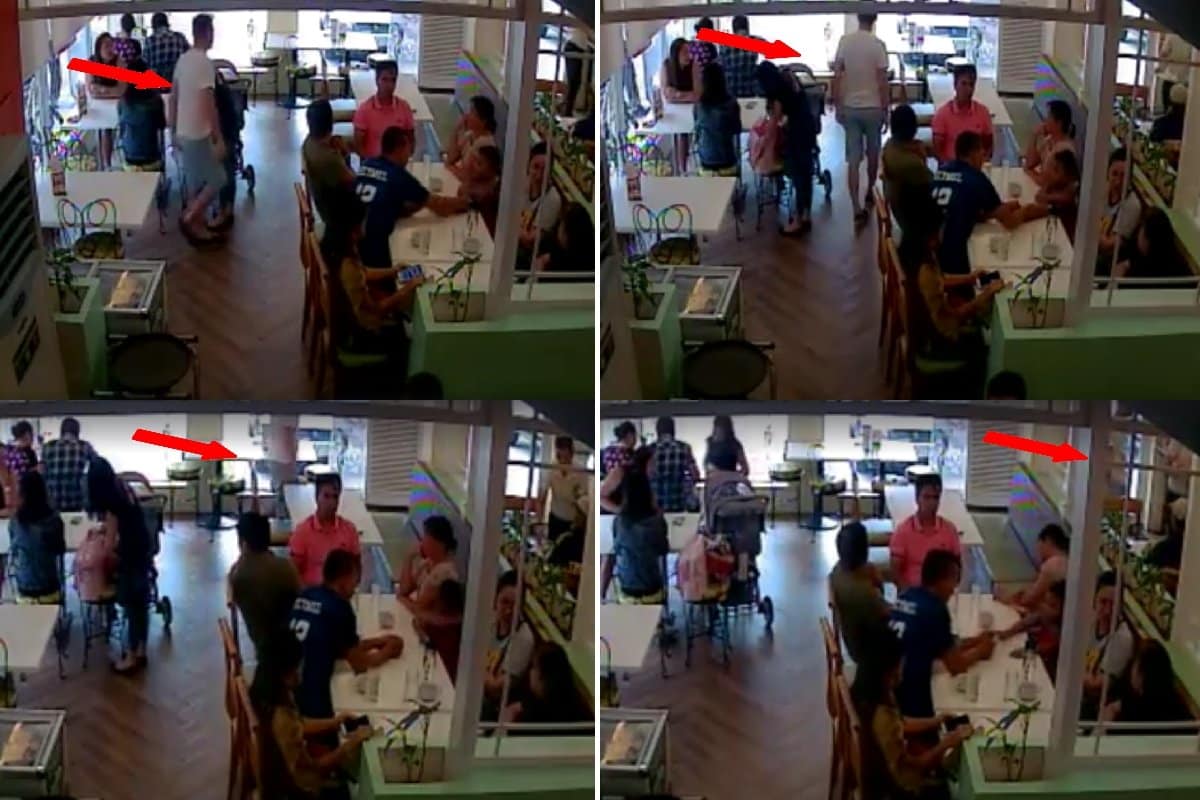 Evidently, upon seeing the envelope on the floor, the man got up from his table and went to where the envelope had fallen. We would expect him to simply pick up the envelope and call the attention of the restaurant supervisor. Unfortunately, that’s not what he did. As it turns out, the man started to sneakily kick the envelope towards the table where his wife and daughter were sitting.

Thief’s “triumph”: When he bends down to get the envelope full of money.

Netizens pointed out that it’s even more disturbing that the family seem to find nothing wrong with what he did. They just watched him do it. His daughter even gave him her jacket so he can hide the envelope.

Netizens remarked, “Only the baby is innocent.”

Indeed, people who have seen the video just can’t believe that the man dared to take the envelope full of money. Not to mention, in front of what looks like their housemaid or nanny who was busy taking care of the baby, which commenters pointed out “the only one, innocent in the group”.

Here’s where he slips the envelope into his jacket.

What baffled people even more is that the family looked like well-to-do people. They didn’t seem to be dying from hunger or anything like that. In fact, they even owned a brand new car, a Toyota Fortuner 2016 model. Yet, the man took the money that was not his. The entire family even worked together to hide the envelop. Talk about teamwork!

The man and his family drove away in a brand new car.

Netizens are hoping that the man and his companions will soon be identified.