The mega fight between Conor McGregor and Floyd Mayweather is all set. The two are currently on tour, promoting their upcoming battle on August.

The rivals met once again, but this time at the Budweiser Stage in Toronto, Canada where more or less 16,000 fans were present. Mayweather took a shot at McGregor by bringing an Ireland flag and posing with it in front of the crowd.

The boxing legend and UFC superstar met for the second time in two days as part of their worldwide promotional tour. 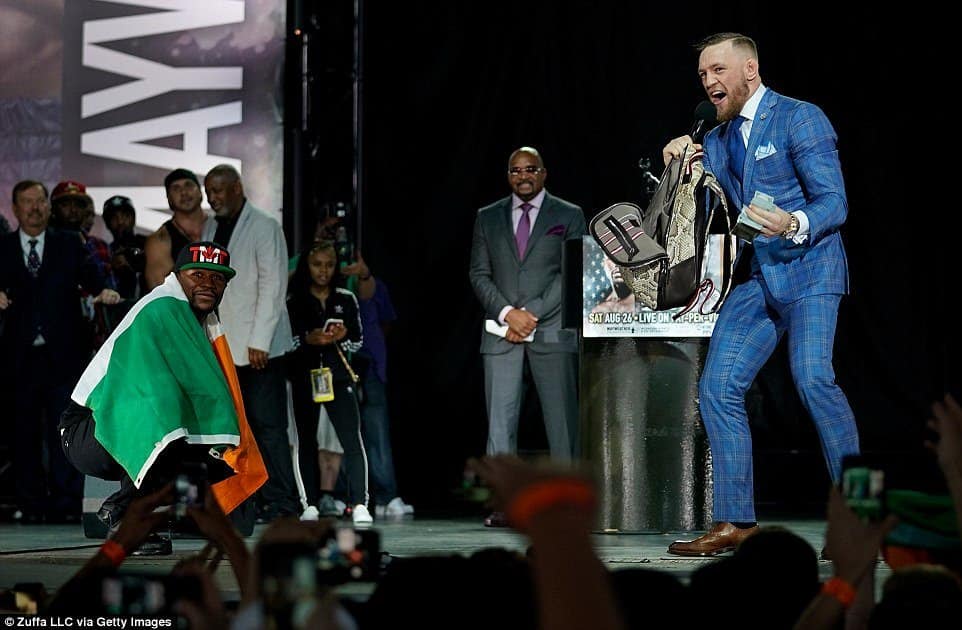 Mayweather rallied on stage with the Irish flag on him. 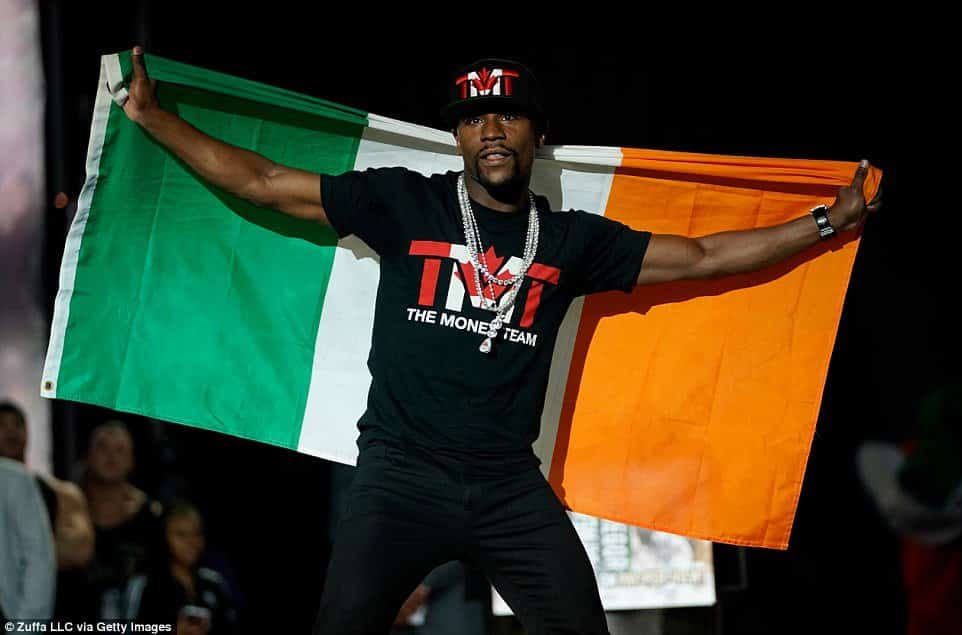 Feeling disrespected, the UFC superstar threatened to knock the boxing legend out if he has to do anything other than that. Daily Mail reports that McGregor then grabbed Mayweather’s backpack and found out that it contained USD$5,000.

This was the second time that the pair met, with the first one being at another promotional tour in Los Angeles. Unbeknownst to Mayweather, McGregor wore a suit with the words “F**K YOU” pinstriped on it.

McGregor threatened to knock Mayweather out if he has to do anything disrespectful with it. 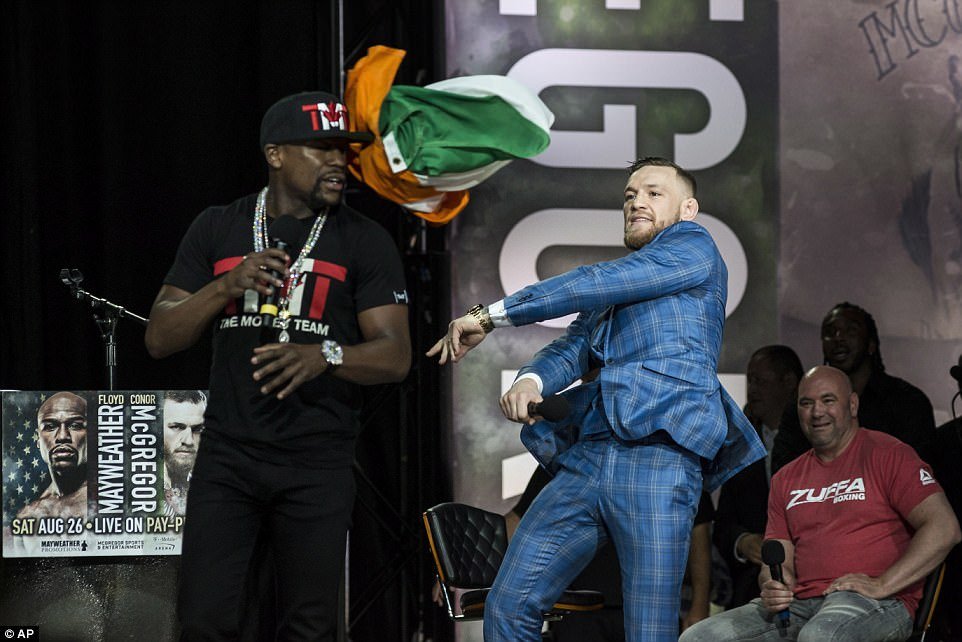 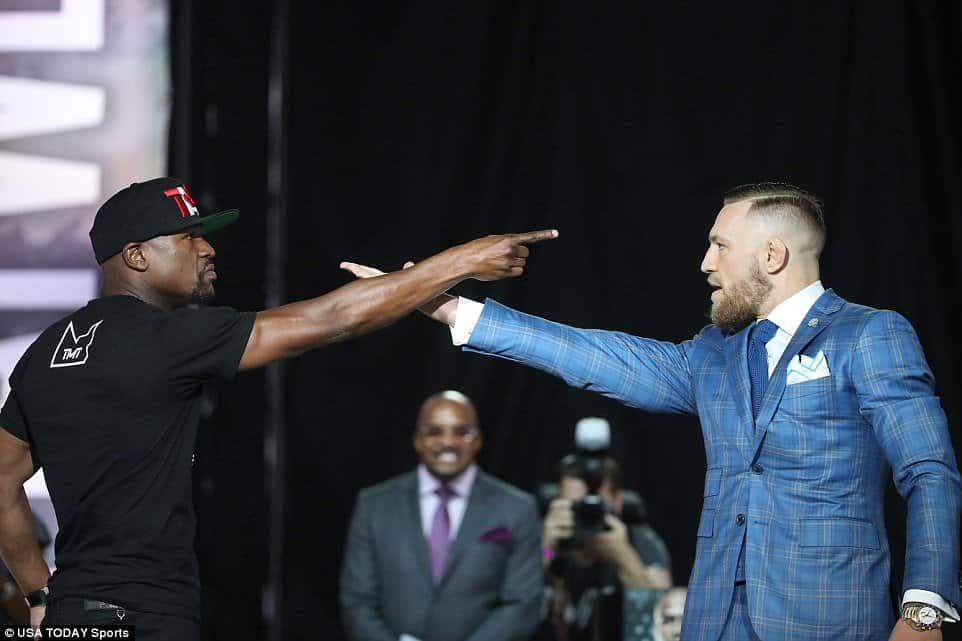 As expected, the two traded barbs and insults, but McGregor turned out to be the event's crowd favorite. 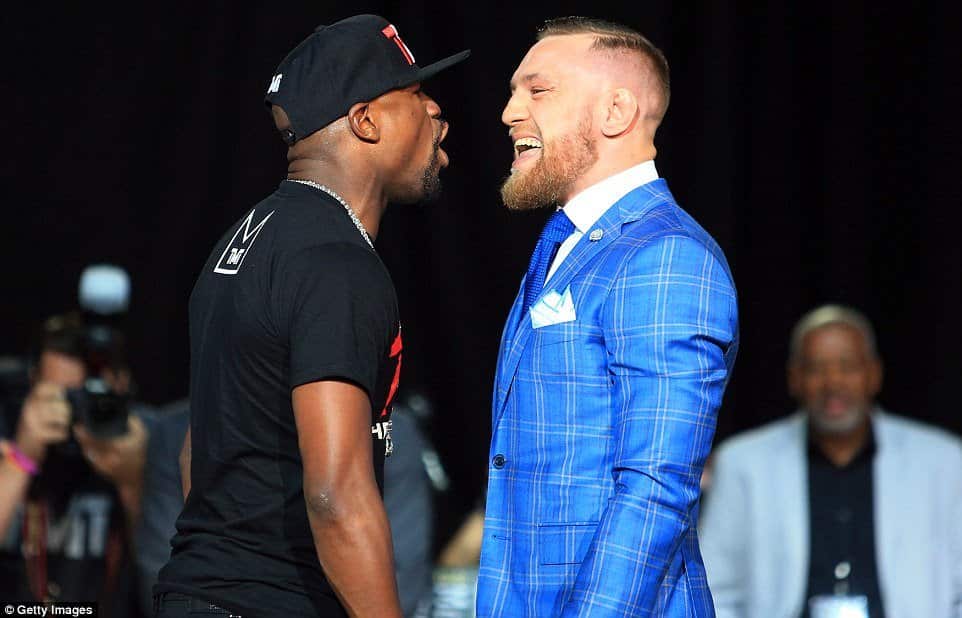 At Toronto, McGregor was clearly the crowd favorite. He took the mic and said, “On the count of three I want everyone to scream at the top of your lungs: F**K the Mayweathers.” The crowd obediently followed and chanted it back.

At one point, McGregor insulted his opponent saying:

“40-years-old, carrying a school bag, the man doesn’t even read!”

The Money Team leader was heavily booed by the Canadian fans. 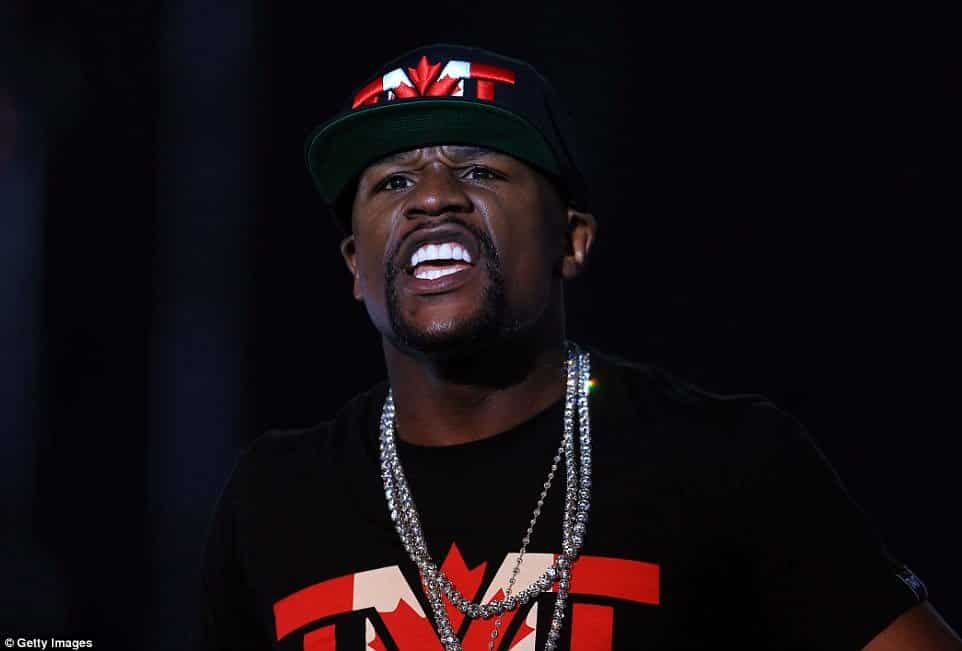 McGregor reminded Toronto of his fight against Jose Aldo, who got knocked out in 13 seconds. 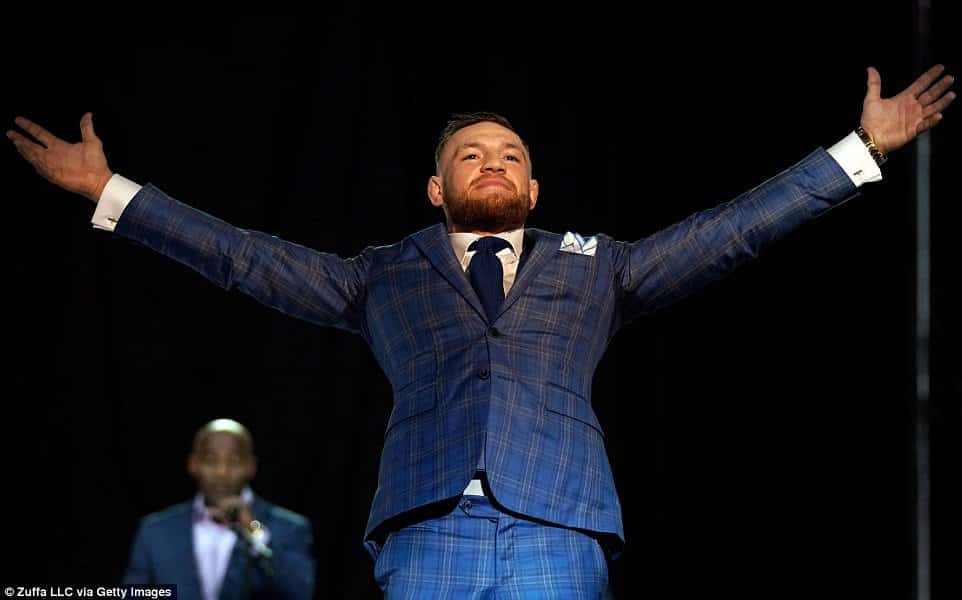 The Irish-born fighter mocked the boxer for being illiterate. 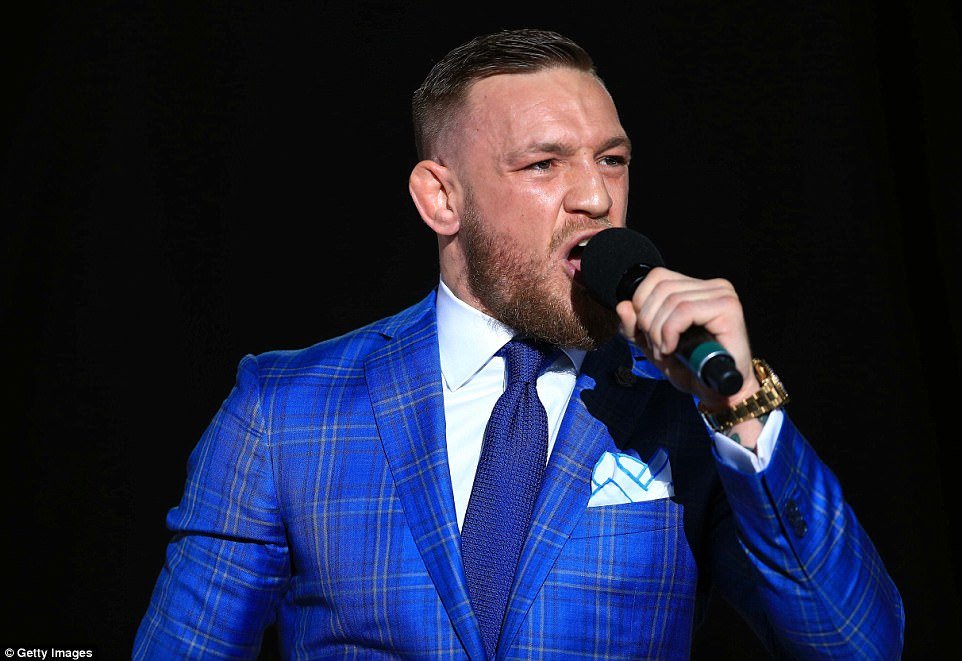 The Irish-born fighter went to his expletive attacks, saying that Mayweather “won’t do sh**” and that he cannot do anything to stop him. He also took a shot at Showtime, which has a business relationship with the boxer.

McGregor announced that Showtime tried cutting his mic off.

The mixed martial artist continued that the network was trying to put him in an uncomfortable position, a position where, according to him, he always thrived. 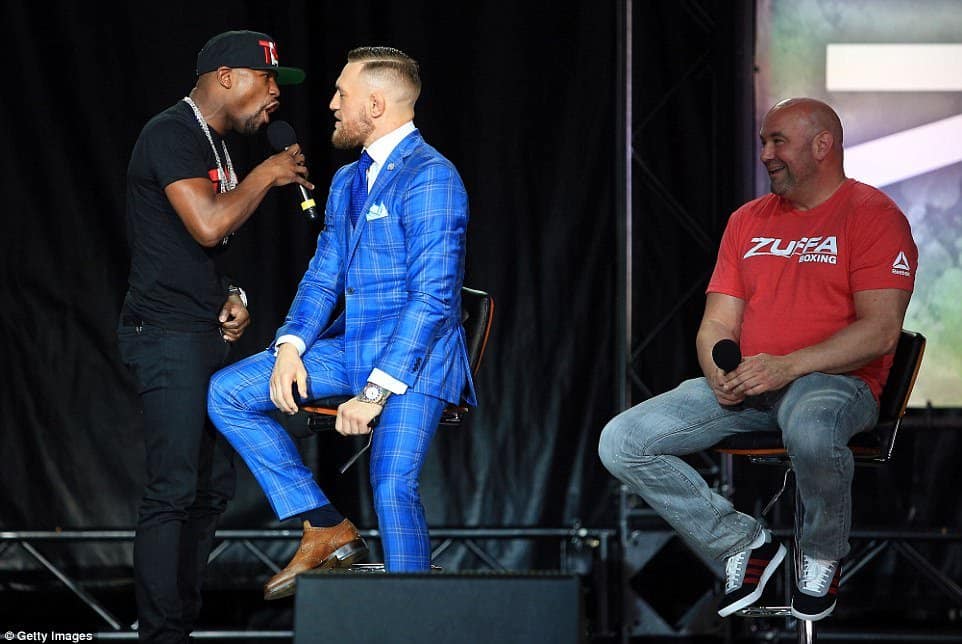 Mayweather and McGregor are set to fight this August and the bout can be seen on Pay-Per-View. 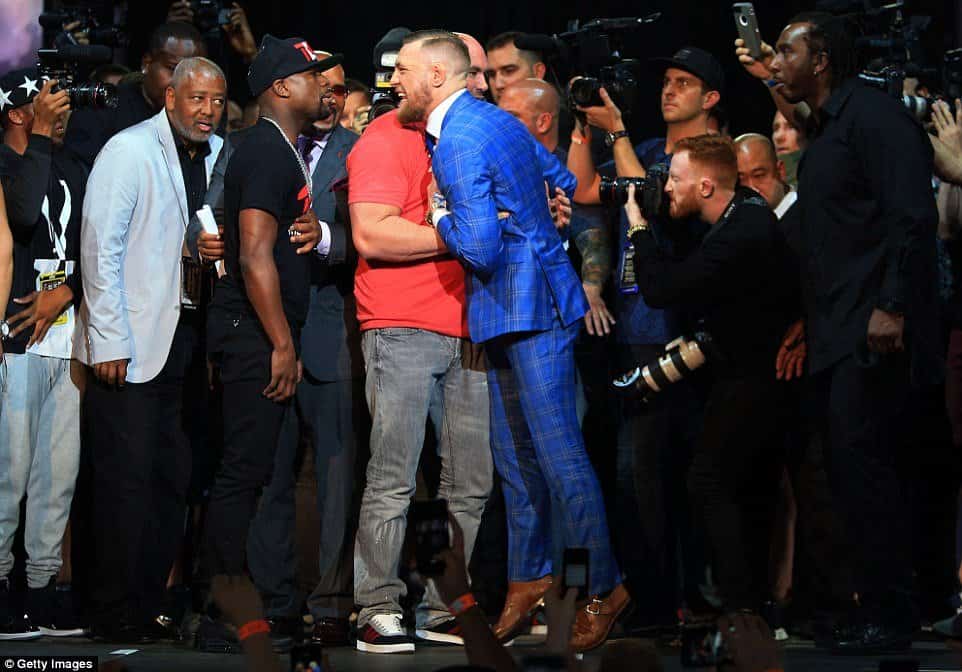 And McGregor’s myriad of shots did not stop there. He even reminded the boxer of being an undercard on Oscar De la Hoya’s previous fight. “That’s just facts,” he said.

The UFC fighter also referred to Toronto as the place where he beat to sleep Jose Aldo. The latter was once the number 1 pound-for-pound fighter. McGregor also reminded the fans that people “said the same things then as they’re saying now,” but it took him only 13 seconds, referring to Aldo’s knock out.

McGregor said of Mayweather’s fighting style on the ring,

The guy was definitely lit.