Seeing kids celebrate freedom and victory is priceless just as being able to witness someone so young standing up for what she think is right. Indeed, ‘Love always wins’ and this brave young girl has proved it once again.

Zea and her father Ryan Bowling have been volunteers at ComFest –an annual music and arts festival in Columbus, Ohio. Recently, an impromptu celebration took place following the U.S. Supreme Court ruling that the Constitution guarantees a right to same-sex marriage. Everyone was celebrating except for some street preachers who came uninvited with some hateful messages for the supporters.

Meanwhile, this ‘badass’ 1st grader decided to take a stand when she encountered one of them. Zea did not even say a word, she just flaunted her rainbow flag and confidently faced the homophobic preacher who is almost twice her size. It was a great thing that the community was there to back her up too. Some even gave her a high five to show their support and admiration. Her proud father Ryan also captured the encounter on video and uploaded it on YouTube which quickly went viral on the Internet.

‘Zea didn’t just flash the flag at that hatemonger, and bail. They went toe to toe, for several minutes, while he bellowed all of his fire and brimstone right in her face. Grown man vs first grader. She told me afterward that she did feel scared. The one thing the people of ‪#‎comfest2015‬ never let her feel though? Alone,’ Ryan said.

Another amazing photo of the encounter was captured by Mara Gruber saying Zea is an ‘awesome kid.’ 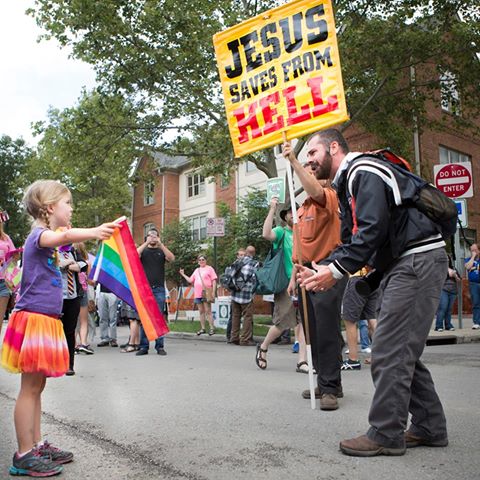 Watch the remarkable encounter in the video below: