Do blind people experience complete darkness? What do blind people see? Perhaps, these are the questions most of you are curious about.

Those that suffer partial visual loss from glaucoma, cataract and the like see hazy, cloudy and fuzzy images. A functionally blind person can see a little light or bright lights or intensely minimal vision while NLP or total blindness has no light perception at all but this is a very rare condition.

There are times people who are totally blind will see flashes of light that aren’t really present. It’s called a biological glitch; we can compare it to the flashes people with normal vision see for a short while if they get hit on the head.

Blind people can imagine things around them accurately by using their senses. They will hear, smell, touch the things around them to be able to distinguish and describe it. They can give the height, depth, width, weight, texture of an object; it’s just that they couldn’t tell the color.

A blind man was asked to draw a cat based on how he thinks it looks like. 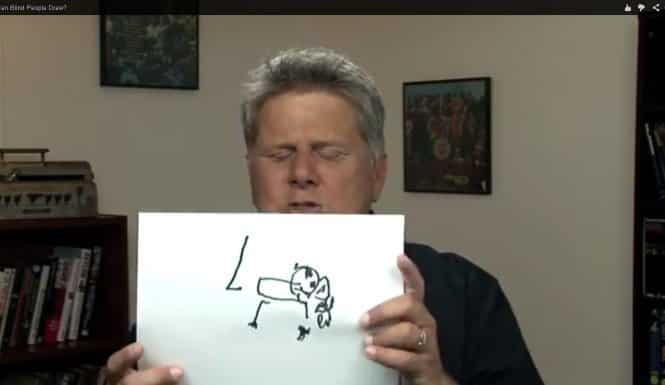 According to some blind people when asked if they can see or imagine about the things around them, they said that there’s plenty of imagery that goes on all the time in blind people.

An amazing experiment was made when a blind man was asked to draw the things based on how he imagines these objects look like.

Some people requested him to draw rainbow, world, giraffe, elephant and more but according to him it will be difficult for him to draw the things he have never experienced or touched so he prefers sketching things that he is familiar with.

He drew a cat, car and himself. All of his drawings are pretty accurate! He based everything from his senses and he pictured it greatly! The drawings were a little bit hard to understand as it was difficult for him to remember the spaces while drawing but the description he said for every item were clear and precise.

It was amazing that through their senses they are able to describe and imagine things around them exactly, except there’s no color. This man is also entertaining and has a great sense of humor, he even signed on his drawing like a professional painter because according to him, it will be posted down the hallway.

What are your thoughts about this experiment?

Don’t forget to SHARE this to your family and friends!