The holiday season for shops means grueling tasks and a whole day of dealing with shoppers going loco over products, but it also means huge profit. They never imagine though that when the celebrations are over, they will have to face the craziest complaints and requests from shoppers who have evil tricks up their sleeve.

One lady spotted the item she probably thought would be perfect to make up for her holiday expenses. She might have really needed some cash as she obviously gathered extra energy for her plot. The shopper dragged her enormous Christmas tree all the way to Costco in Los Angeles to get a refund for what might be the lamest reason: the tree is dead.

A shopper went to a local shop to return a Christmas tree she complained was dead. 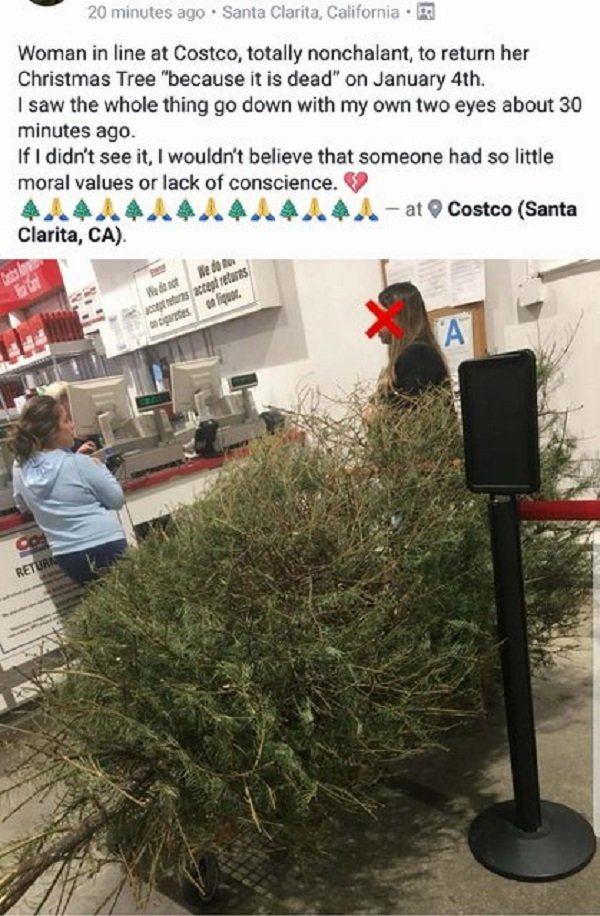 After using the tree for Christmas, the unnamed customer argued with a Costco staff last January 4 that the tree she bought from them was dead, hence demanding for a full refund. Another shopper happened to capture the moment when she made the request.

Her shameless decision made netizens criticize her heavily.

Shame on Costco, Shame on this loser, but it’s going to start costing us all when the word gets out…..

Woman in line at Costco, totally nonchalant, to return her Christmas tree ‘because it is dead’ on January 4th.

I saw the whole thing go down with my own two eyes about 30 minutes ago.

If I didn’t see it, I wouldn’t believe that someone had so little moral values or lack of conscience.”

While the witness thought of her as a person with “no conscience,” some others called her cheap.

This post was later taken down, but one social media goer happened to take a screen shot of the story and uploaded it on Imgur. Others may have criticized the frugal shopper, but another shopper saw the situation in a different light.

“Heartbreaking to think she may have needed that money so much, she lost all self-respect and dignity for it.

I wish I hadn’t felt so offended initially, otherwise I would have tried to talk to her to find out what was going on. Makes me sad and sorry.”

The original poster and witness of the incident again took to social media to write an update on the story, revealing:

“She did get a refund. Not happily though. It was questioned, verified purchase on her account and she was [shamed] to a small degree…But I don’t think it fazed her because she has no conscience. She didn’t seem to mind that I took a photo and said ‘ARE YOU SERIOUS?!!!!’”

Apparently, this is not the first time that such thing happened at Costco. Some people who caught wind of the incident said shoppers like this brazen lady really exist.

So it appears that Costco actually allows their shoppers to refund their items even if they were already used for years.

Turns out, it’s sort of a thing at Costco.

One netizen, who also happens to be a Costco employee shared how one shopper previously came to the shop to refund a four-year-old mattress. However, some people assume that it’s probably okay with Costco to refund overly used items as they even accept returned stuff from a decade-old purchase.