Trained dogs can stand on their two legs. But one family discovered that their Tibetan mastiff started doing this “trick” without proper training.

A woman in south-west China was stunned to discover that the dog she has been raising for a long time was an endangered black bear. Su Yun purchased a black pup during a trip two years ago, thinking it was a Tibetan Mastiff. But then she realized that the dog she named Little Black ended up being an enormous wild bear. 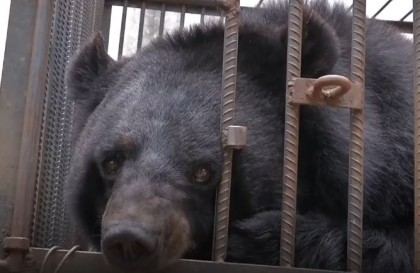 The “puppy” first surprised Yun’s family with its appetite. Yun said the animal could finish a “box of fruits and two buckets of noodles every day.”

That is when Yun started doubting if her pet is indeed a dog. Tibetan mastiff is a dog breed that normally stretches around 82 kilograms (180 pounds) and stands 71 centimeters (28 inches) tall. Little Black doesn’t have those features.

“The more he grew, the more like a bear he looked. I am a little scared of bears.”

Yun decided to take Little Black to the wildlife center because it is illegal to keep or raise wildlife animals in residential homes.

She asked for help at the Kunming Zoo, but the zoo refused to take in Little Black because she failed to provide a birth certificate for the bear.

The concerned woman then contacted Kunming Forestry Police, and they suggested to send the bear to Yunnan Wildlife Rescue Center, where it was identified as an Asiatic Black Bear, more commonly known as a white chested bear.

World Wildlife Organization (WWF) has listed the bear as a second-class protected animal species in China. Although the Yun family raised the bear as a pet, the rescue team still had to sedate it before transporting as they were in fear of their safety.