It takes a lot of time, effort, and practice to perfectly trim your own hair. With that said, most people would rather go to the salon to have it done by professionals.

But what if that one particular professional hairstylist is a six-year-old boy? Yes, you read that right. You are going to put your trust (and hair) in a six-year-old kid’s hand. Would you dare? 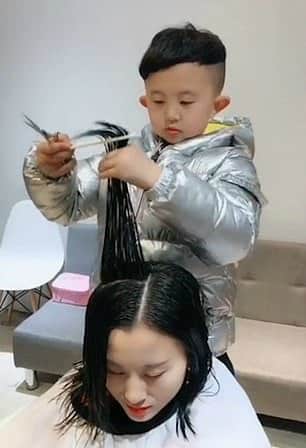 While that sounded like a complete joke to some, it is actually happening in China. Jiang Hongqi learned how to do hairdressing from his parents who own a salon. Despite his young age, the boy quickly learned the basics and techniques.

While most parents are still trying to figure out how to trim their children’s hair evenly, this little boy could do the other way around without breaking a sweat. In fact, his parents trust his skills so much that he was allowed to touch their clients’ hair after refining his skills over the past two years.

Jiang’s parents ran the salon for six years. He was only four years old when he started helping out. At six years old, the young boy already knows how to nail popular hairstyles.

In the viral clip, one can see Jiang, who is from Sichuan province, swiftly trimming and straightening a woman’s hair like a professional hairdresser. His videos have been widely circulated on social media and people are speechless by his skills.

The clips, shot by Jiang’s parents, were uploaded to short video app Kuaishou, where he has gathered more than 1.5 million followers.

Netizens were so impressed with Jiang that they had nothing but good things to say about the boy.

“Such a hard-working and patient child. I looked at my own kid, and he was playing video games… sigh.”

“This boy has a bright future!”

“I need parenting advice from this boy’s dad and mum!”