Several police officers have been caught on tape doing injustice to the people they vowed to serve and protect. Some people have even lost their faith in the justice system because of them.

This is why hearing stories about cops who do random acts of kindness are always excellent to hear.

A homeless man was asked to get off a local service bus simply because he was barefooted. When Kenya Joyner, a 43-year old police officer from Delaware River Port Authority, was called to escort the man, he took the chance to ask why the guy didn’t have shoes. The poor man just said he couldn’t afford one.

Rather than just telling the destitute man to leave, Officer Joyner went to the Payless store across the street in Lindenwold. 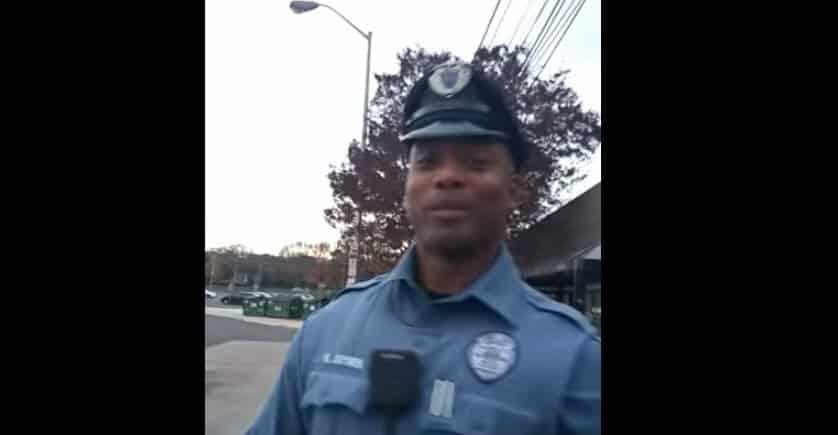 “We saw the officer pull back up, and we thought he was gonna tell him to leave,” Kayla Christine Palmer, a local resident of Pine Hill, New Jersey said. “Instead he came out with a box of shoes.”

“My dad saw the man get kicked off the bus. He didn’t have any shoes on. I came up and he was telling me about it.”

Shortly after, Palmer caught Officer Joyner saying goodbye as the poor man puts on his new pair of shoes. She went up to him and said:

“That was nice of you. I wanna shake your hand. You’re gonna go viral!”

Joyner was unaware that Palmer was recording the incident until she told him.

“Oh come on,” Joyner said, laughing. The officer obviously shied away and returned to his vehicle.

“He needed some recognition,” Palmer said. “Because you do see some of these negative stories.”

Officer Joyner’s random act of kindness was indeed recognized. His video was viewed millions of times by netizens and he even receive some media attention.

“I just felt like the gentleman simply was on hard times. He wanted to ride on the bus, but he couldn’t afford shoes, there was no need for me to arrest him for that.”

And to the Philadelphia Inquirer, Officer Joyner said:

“I know plenty of officers that have done similar actions and even greater ones, but I guess I was caught on film. Most officers have no problem being the way I am.”

What can you say about Officer Joyner? Isn’t he a nice guy? Share your thoughts in the comments.