No Christmas turkey for you! A group of vegan activists formed an impenetrable human chain blocking the meat aisle at a supermarket. They also brought placards of their protest and flowers for the turkeys.

The incident took place at the Waitrose in Brighton, East Sussex in South East England. The vegan activists decided to barricade the supermarket’s meat section, preventing shoppers from packs of steak, chicken, turkey, and other meat products. In addition to that, they brought plates of blood and placards declaring “Humane murder is a lie” and “It’s not food, it’s violence.”

The vegan activists held placards and shouted at shoppers trying to reach the meat aisle.

The activists were from the Direct Action Everywhere (DxE) group, who recently staged a steakhouse protest where they made customers listen to the screams of dying cows. Although they didn’t bring the same creepy music to the supermarket, they used a loudspeaker to yell at shoppers trying to purchase meat.

The activists also brought flowers for the dead turkeys. They informed shoppers that “birds are killed between nine and 21 weeks old when their natural lifespan is ten years.”

The protestors placed flowers on the packaged meat products. 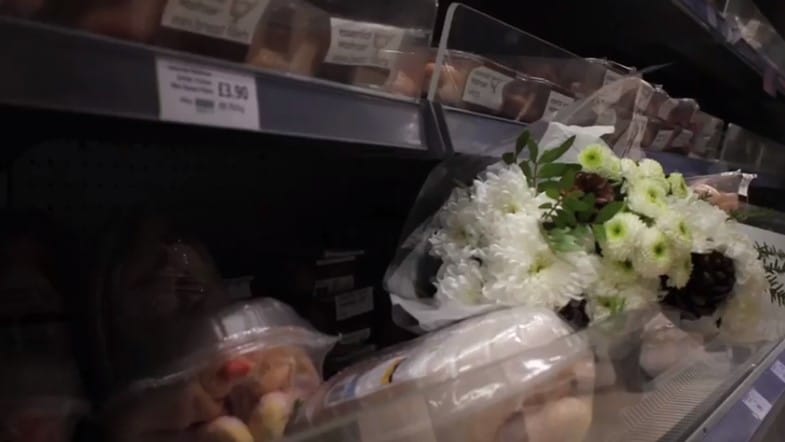 Despite their best and arguably disturbing efforts, the vegan activists couldn’t fully prevent shoppers from buying meat. The police arrived to end the protest although no arrests were made.

A spokesperson for Waitrose later clarified that the supermarket makes sure that the turkeys are treated humanely.

“We pride ourselves on exceptional animal welfare, with our turkeys farmed to high standards at farms we know and trust,” they said. The spokesperson added that Waitrose is a holder of compassion in World Farming’s Retailer of the Year and also tops the Business Benchmark on Farm Animal Welfare.