The 2015 Miss Universe coronation night was definitely a controversial one to remember after host Steve Harvey mistakenly announced the winner to be Ms. Ariadna Gutierrez of Colombia instead of Ms. Pia Wurtzbach of Philippines. But that didn’t stop the 2016 Miss Universe organizers from inviting Harvey to host the pageant once again.

During the opening of the 2016 Miss Universe coronation night, the comedian made sure that everyone remembered that event last year and addressed the matter first and foremost.

“All right, let’s get it out of the way. I know what you’re thinking: ‘Is that the guy from last year? Did they bring back that guy from last year?’ Well, they did. It’s me. I’m back. Been a long year getting here too, cause boy, I paid the price for last year.” 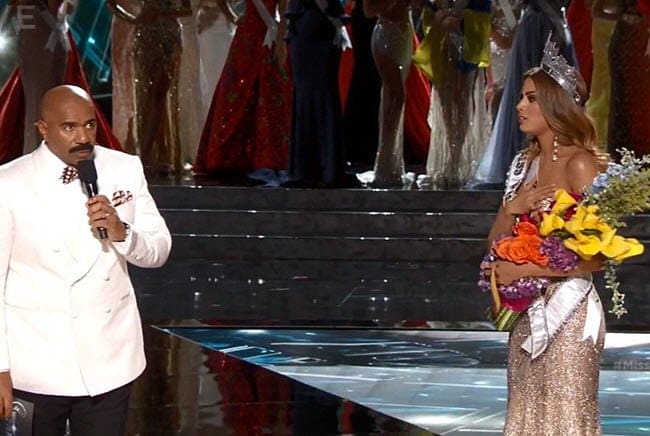 Of course, all is forgiven and former Miss Universe, Pia Wurtzbach, even showed that she bears no ill feelings against the host. She even told Harvey how she never got to say her thanks after making her “the most popular Miss Universe.” When Harvey was handed the card that had the name of the 2016 winner on it, it took long for him to say the name. It was obvious that he was being careful not to repeat the same mistake.

Just then, Wurtzbach went up the stage to help him out a bit by giving him a large, thick pair of reading glasses. Everyone laughed at the gesture but also at Harvey, who was seen nervously receiving the glasses and putting them on. That moment only proved that the past is behind, everyone has moved on and there was no tension between Harvey and Wurtzbach.

Get to watch the funny moment all over again in the video below.

Finally, Steve Harvey got it right this time and everyone was ecstatic that Ms. France’s Iris Mittenaere was crowned as Miss Universe 2016.