Beauty has been a significant part of our society since time immemorial. We’ve always looked for ways to improve ourselves from time to time. In fact, every society has different styles and techniques in achieving beauty. Apparently, the road to pursuing it is not always easy.

Take for example Ancient China: They had their own definition of beauty. And for them, it meant cruelty and disfiguration. Case in point, Lotus Feet was all the rage. For the Chinese, having bounded feet projected the utmost beauty.

Below are 10 odd facts you probably didn’t know about Lotus Feet.

#10. No One Can Tell When the Practice Really Began 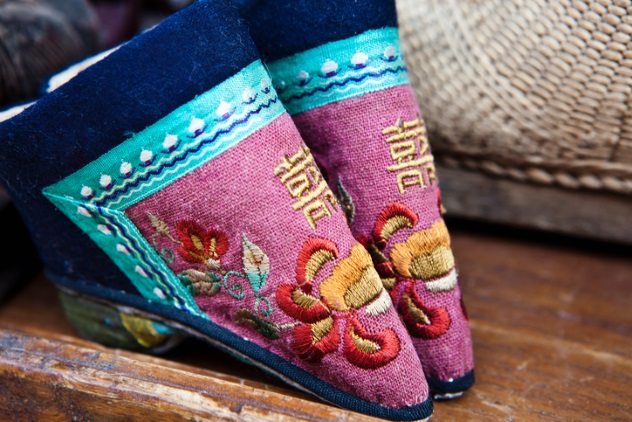 It holds true that foot-binding was a well-known practice, but history experts are still unsure when it all started. But perhaps the most accepted start is the 10th century, an era when the Five Dynasties and Ten Kingdoms reigned. While various emperors rose and fell, the tradition remained steadfast.

#9. Lotus Feet Were Simply For the Benefit of Men 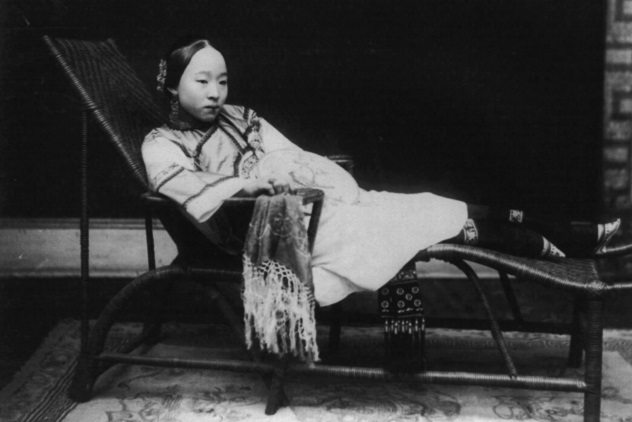 This practice was the most interest of all men during that time. For them, it made a woman look attractive and that having such meant pleasurable effects. But due to its crippling effects, women had to walk shorter and their steps were carefully controlled. It was believed that it caused women to utilize more of their muscles found in the inner thighs, pelvic region, and hips. People then fabricated a belief that women with Lotus Feet gained tighter vagina and pelvic floor, and thus making the sexual experience more pleasurable.

#8. The Practice Would Start at a Very Young Age 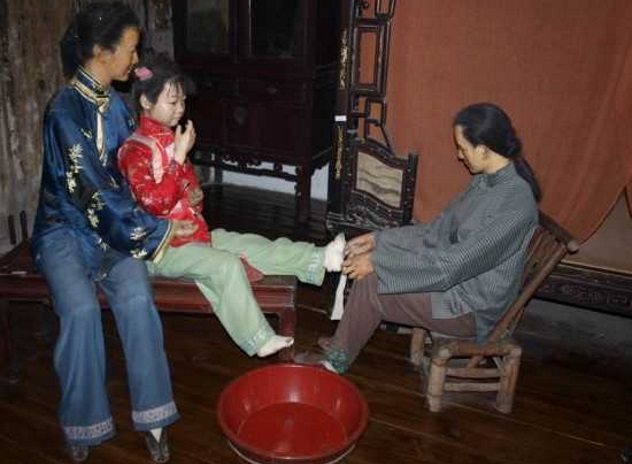 If you’ve seen pictures of women with Lotus Feet, you’d see that most of them are young. This was due to the fact that the practice would start with very small girls. It would begin with children ages of four and nine. Ancient China considered foot-binding – and later Lotus Feet – a sacred rite of passage. If men were into circumcision, women were into this practice.

#7. The Entire Procedure Was Torturous and Long 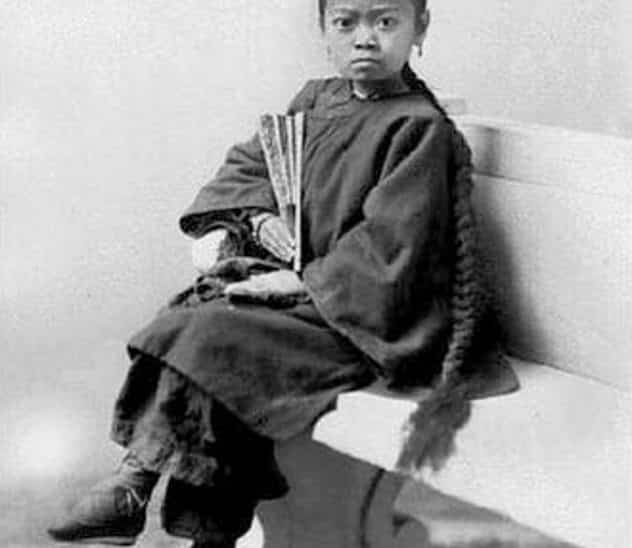 Source: Museum of the City of San Francisco

As soon as a child started the procedure, her carefree outlook immediately changed to agony and pain. And believe it or not, the entire process would require at least two years in order to achieve the Lotus Feet. It would start by placing the girl’s feet in a warm bath to help soften the skin. From there, they would be scrubbed vigorously in order to remove the dead and dry skin. Toenails were even clipped very short, as this would help in preventing any possible nicks or cuts. And to prevent perspiration and moisture buildup, alum was sprinkled all over the region.

#6. It Was a Hygiene Nightmare 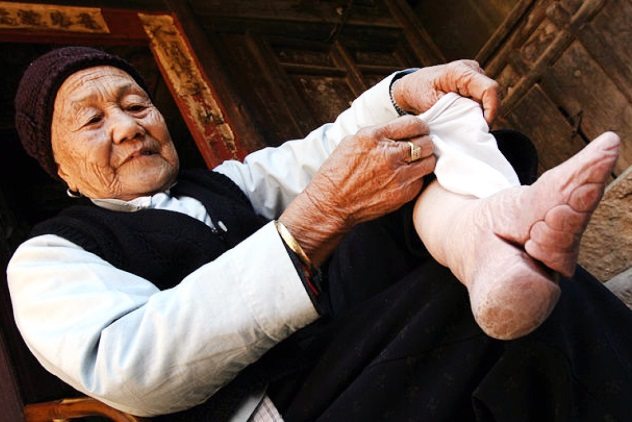 Apart from the agony and pain, there were other medical concerns that women with Lotus Feet endured. First and foremost, the toenails would eventually have various complications. There were cases when the toenails curled under the very edges of the skin, resulting to splits, tears, and/or cuts. But the most rampant of all was ingrown toenails. This would be filled with pus and thus causing extreme pain. This excessive pus in the crushed foot would eventually give way to bad smell. 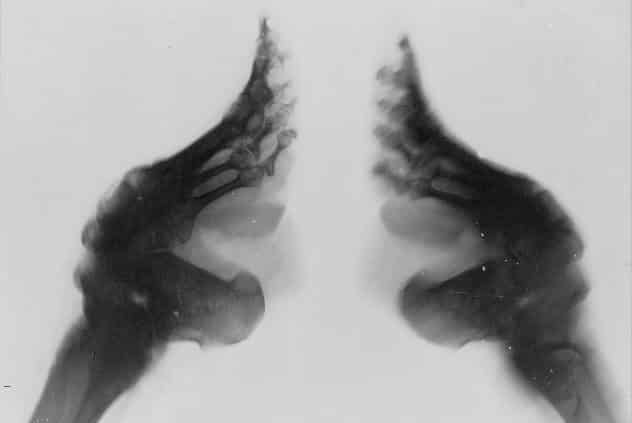 Lotus Feet didn’t only give birth to horrific smell – it also caused the other areas of a woman’s body to suffer. The feet themselves were always prone to paralysis, infections, and even muscular degeneration. This would then cause the woman to require some sort of assistance in walking. And since walking almost became impossible for them, their gait easily became skewed. Their lower legs would even become weaker and weaker each day. 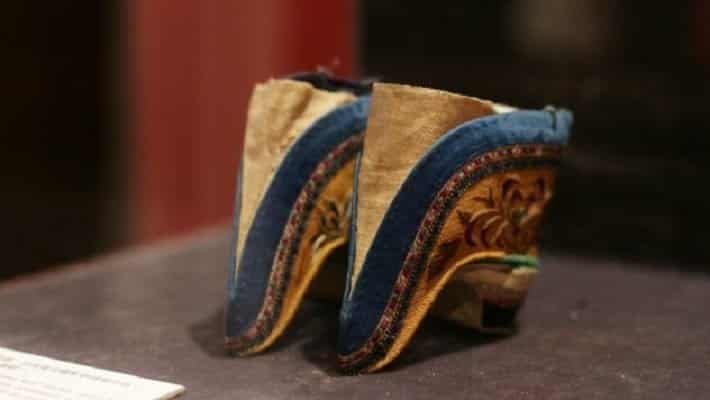 While all Lotus Feet were desirable during the existence of ancient China, there were different levels of appeal. This was based on the foot’s length after the binding was successfully achieved. The first level was called Iron Lotus, which meant having over 10 centimeters. But since men wanted less, women with Iron Lotus barely get married. The next level would be called Silver Lotus, though the measurement was pretty much close to Iron Lotus. Hence women who had this binding also barely married.
But the most sought after was called Golden Lotus, a measurement of mere 7.6 centimeters. To put it simply, it had the size of a cigarette. Women who achieved this were right away guaranteed with marriage, as having such length was deemed a sexual fantasy for most men. 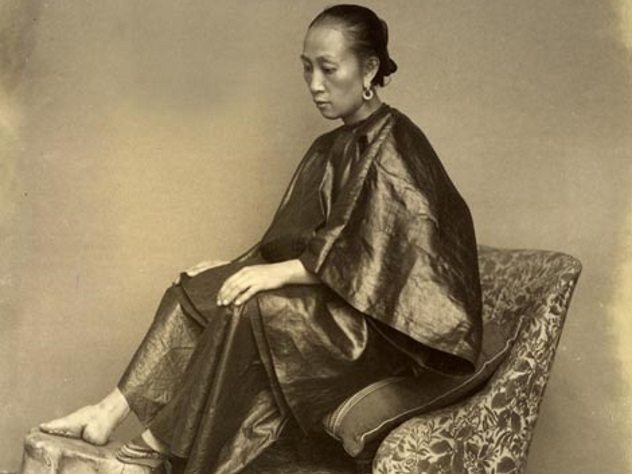 The appeal towards Lotus Feet all began in the realm of aristocracy. Ladies of high status had their feet bound so as to show their position. The higher the status they achieved, the more likely they were to get married to a man of equally high prestige. So if you are to bind a woman’s foot to unmentionable grotesqueness, the more desirable she becomes. 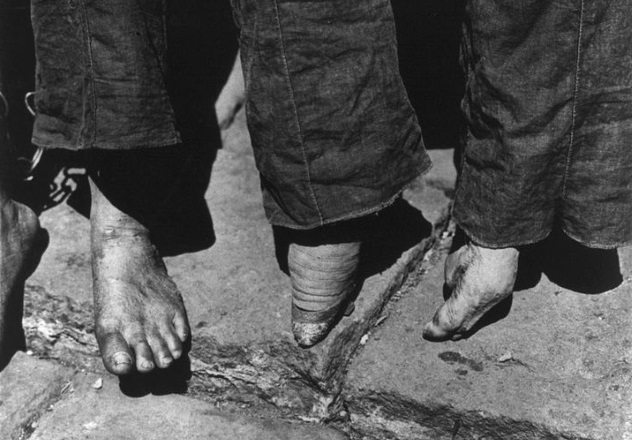 Not only did the practice become a fashion for hundreds of years – it also existed for thousands of years in China’s long history. But since it was only a fad, its diminishing was inevitable. The practice began to go out in fashion during the start of the Qing Dynasty, a time when the country was heavily colonized by Western people. For the colonists, women who had Lotus Feet deserved more and that they viewed it as the utmost practice of torture. Western women, in particular, started to give particular interest and care to the suffered ladies. They opened shelters just to help these people, and they would even give the women with Lotus Feet special medical care. Eventually, the practice diminished.

#1. It Ruined the Lives of the Women 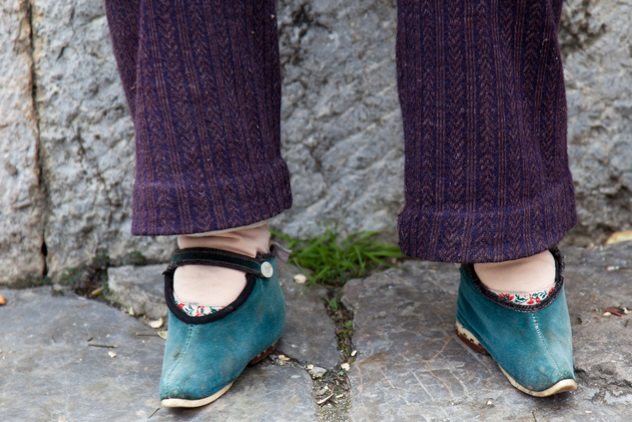 Women who had their feet bound were surrounded with great fear and trauma. Despite gaining a prestige status and “made-up beauty,” their feet were still heavily broke, damaged, and infected. And even when the practice grew out of style, they still lived in the consequences of having such feet. Chairman Mao even established a regiment of inspectors whose job was to look for women with Lotus Feet. And once they were found, they would be publicly shamed. And when discovered, their foot-binding bandages would be hung on their windows so that anyone who passed by could view and shame them.