Some of us just hate it when the alarm rings in the mornings. Besides, who wants to be woken up rudely from peaceful slumber and blissful dreams, right? One man’s “alarm” woke him up so violently, he thought he would never again see the light of day.

Wiley Day, a 32-year-old from Huntsville, Alabama experienced the worst wake-up call in the world when his charging iPhone 7 pumped out about 110 volts of electricity through his body while he was deep in dreamland.

In fact, Day is lucky to be alive. 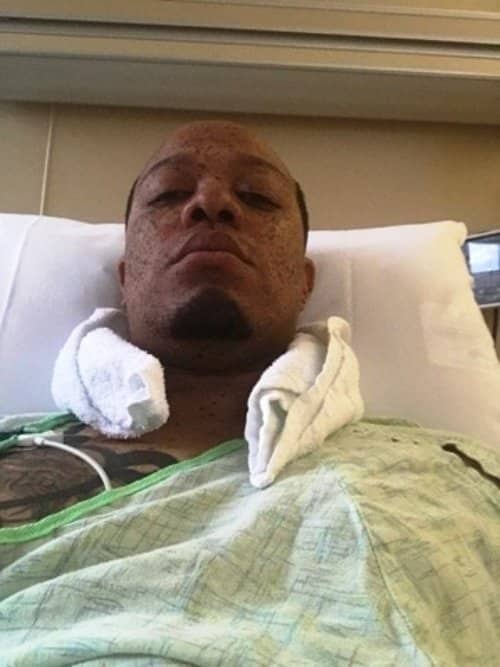 As is his habit each night before bed, Day plugged his iPhone 7 into an extension cord so he could scroll through his social media accounts before falling asleep.

That night, while shifting in his sleep, his dog-tag necklace slipped into the space between his charger’s exposed prongs and the extension cord.

What happened next is something Day will never forget. The resulting electric charge flooded his sleeping body immediately. The heat and electric shock jolted through him and threw him to the floor!

In that exact moment, Day remembered thinking to himself:

His metal dog-tag necklace acted as the conductor that served as the worst “alarm clock” he’d ever had in his life.

Moments after he was literally shocked out of bed, he felt numbness overtake his body, and a huge pressure bore down on his neck. Despite the sensory overload he just experienced, Day was able shout for help, rousing members of his sleeping family.

Fortunately, he also had the presence of mind to pull the scorching necklace from his skin, just as his niece ran into his room. His niece told him he kept yelling “Jesus!” while his sheets smoked around him.

His t-shirt nearly caught on fire. 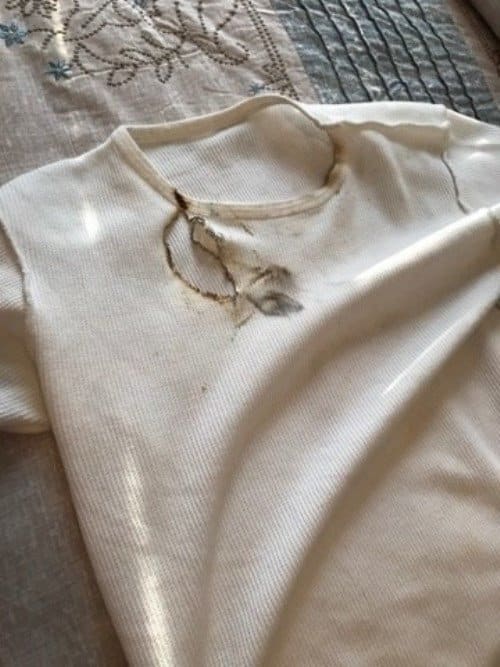 “I could taste burnt wire in my mouth.”

He had other more painful injuries, as well. 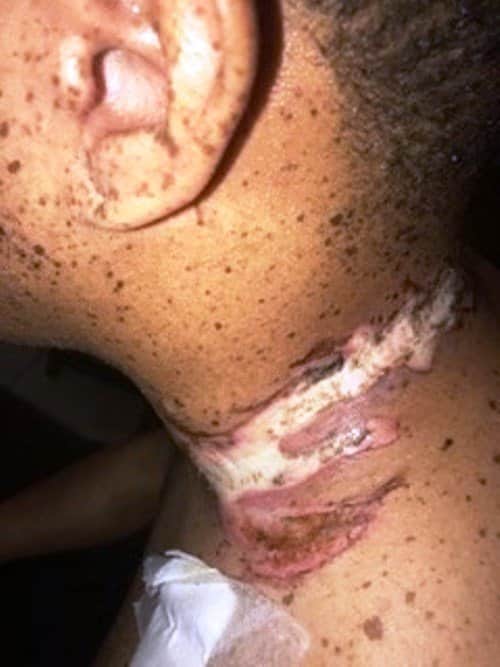 His neck sported pieces of missing flesh where his dog-tag chain seared his skin away.

In spite of his ordeal, Day drove himself to the doctor, who immediately sent him straight to the local hospital. From there, he was transferred to the University of Alabama’s Trauma Burn Intensive Care Unit.

He was treated for second and third-degree burns to his neck, chest and hand. 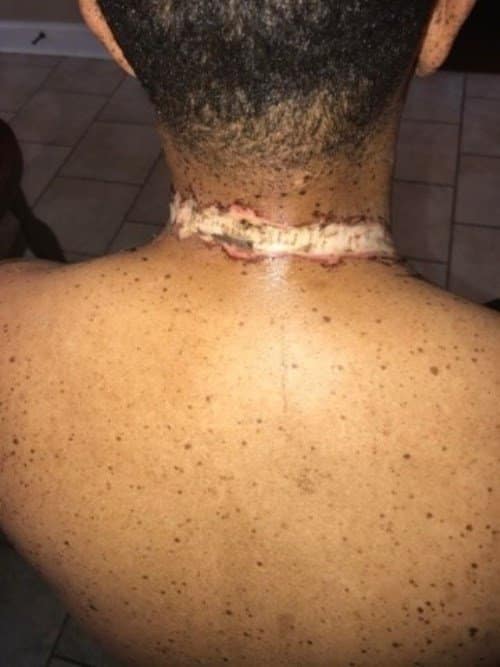 He also received treatment for torn tissue in his left shoulder from where the electric charge left his body.

“My hand still has the chain print on it.” 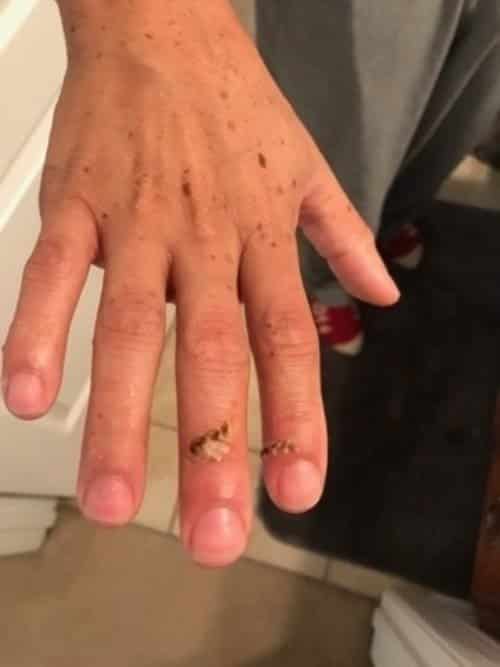 WAAY-TV interviewed Dr. Benjamin Fail, who attended to Day. He said 100 volts of electricity is enough to kill a person. He estimated Day suffered a 110-volt electric shock.

As to the iPhone 7 electrocution incident, apparently Day used a cheap extension cord from a local dollar store to charge his phone. He never thought twice about the accessory purchase since so many other people used them to charge their devices.

Apple didn’t comment on Day’s electrocution mishap except to point out a support page on their site which “recommends using only accessories that Apple has certified.”

According to the American Burn Association, cheap and uncertified extension cords cause around 4,700 fires annually that result in 50 deaths, 280 injuries each year. 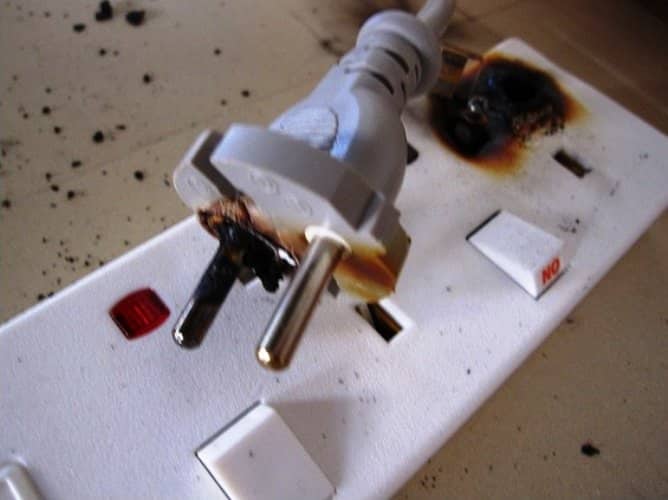 Day has definitely learned his lesson from his near-death experience. A behaviour specialist at an Alabama junior high school, he now speaks about what happened to him, and to warn others about the danger of leaving phones charging overnight.

“I know God saved me because my situation was one in a million. But we are all so plugged in all the time I just can’t help but think.”

Lucky to be alive. 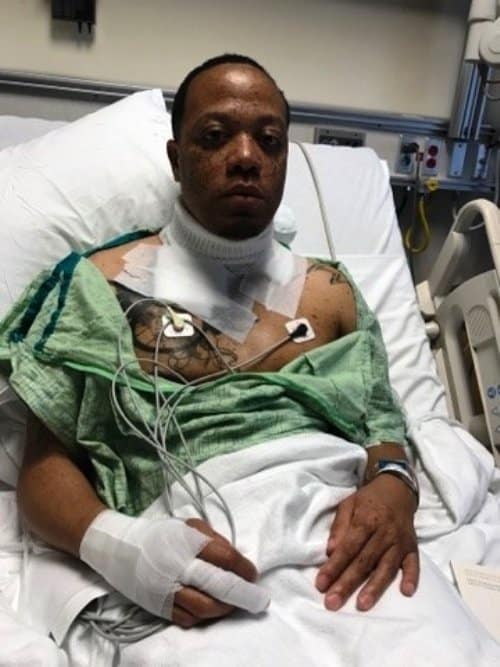