Last Wednesday, February 1, an 83-year-old Korean grandma was suddenly assaulted by a 27-year-old woman. Before she punched the unsuspecting old lady in the head, the younger woman had reportedly yelled, “White power!” The incident occurred sometime past 2 p.m. at the bustling Koreatown neighborhood in Los Angeles, California.

The grandmother sustained a one-inch cut on her cheek. She also and also hurt her knee when she lost her balance and fell on the sidewalk.

It happened in Koreatown, where many Korean immigrants live. 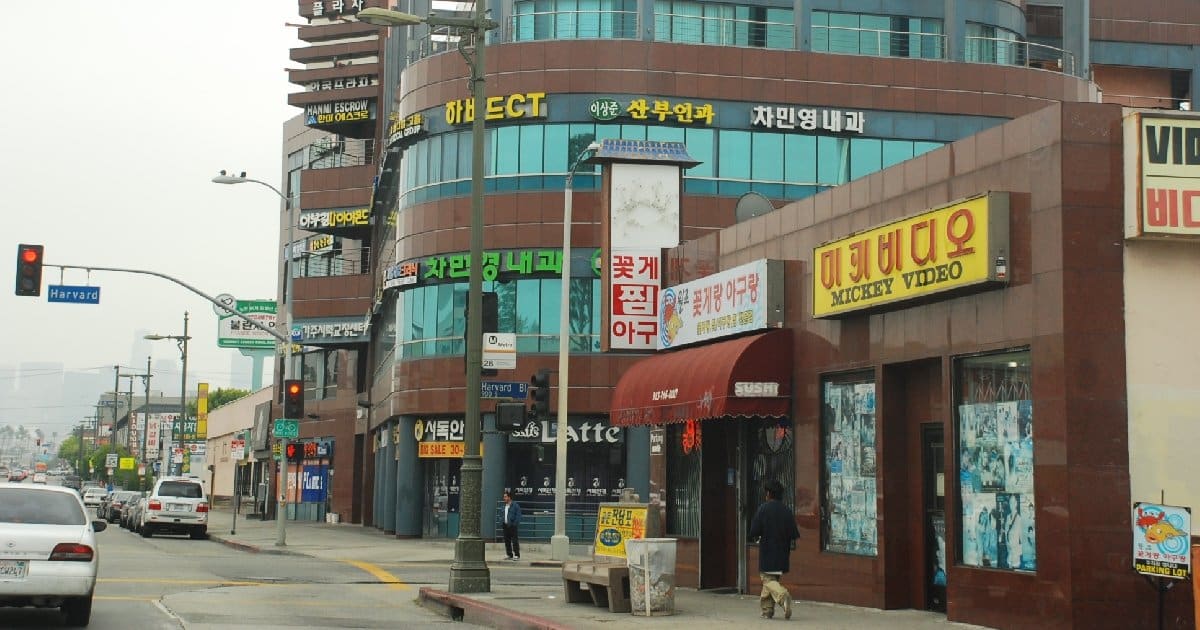 Shocked by the violence, other bystanders moved to stop the young woman from inflicting more injuries on the Korean grandma. In fact, Mail Online reported that other Koreatown residents chased down the racist woman. They then called the police.

The police arrived on the scene at around 2:30 p.m. and they immediately handcuffed the racist woman. She screamed and cursed as they took her into custody.

Who would be so cruel to hurt this gentle old lady? 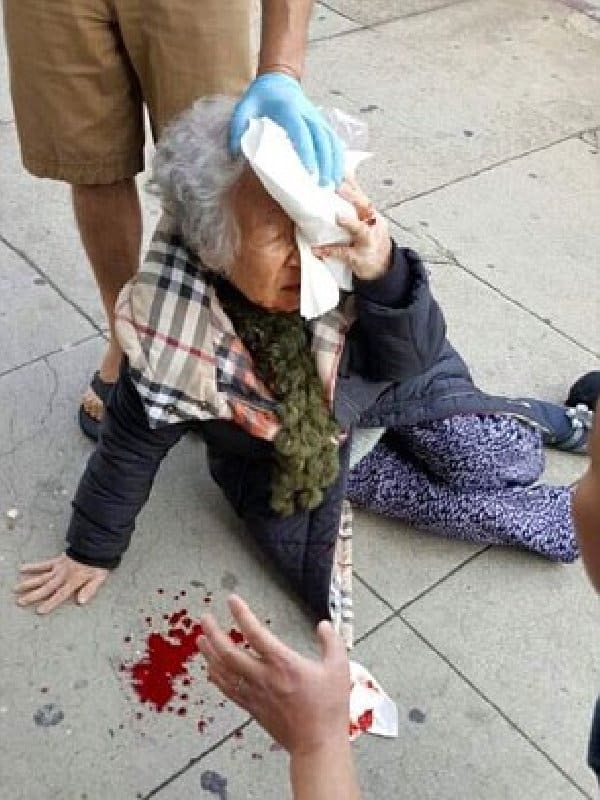 At first, the police said the woman gave them a fake name. She claimed she was “Patty Garcia.” However, when they validated her identity using her fingerprints, it showed that she was actually named Alexis Duvall.

The elderly Korean lady was asked to give her testimony to the police. With the help of an interpreter, she revealed that she didn’t know Duvall. She added that the attack “came out of nowhere.” One minute she was just enjoying herself while walking, the next minute a woman had punched her.

Alexis Duvall may claim that she has “mental issues” to avoid jail time. 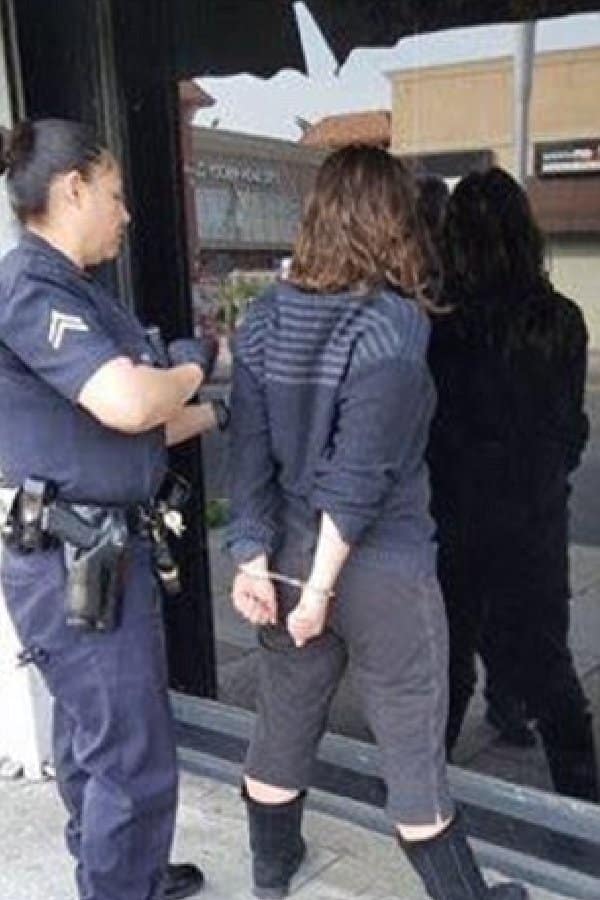 Several witnesses told the police that the woman who attacked the grandma kept yelling, “White power!” She also said the N-word and repeated the phrase, “Power is power!”

Just minutes after the incident, a Facebook user named Linda Lee — who is identified as a friend of a witness at the scene — shared photos of the bloody victim and the racist woman being arrested.

Linda Lee, who shared photos of the incident, had a tough realization. 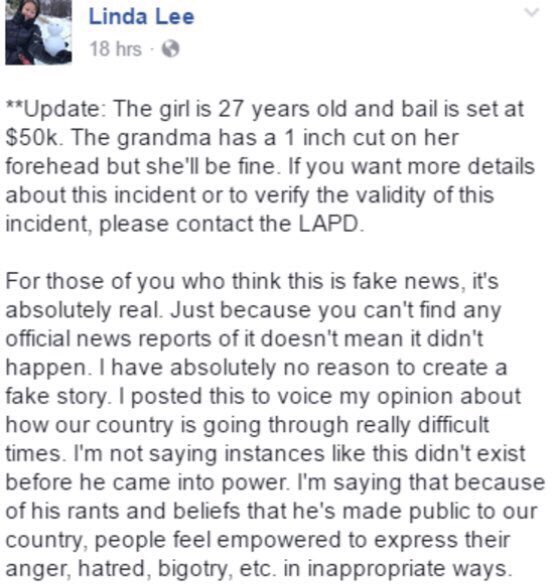 Lee has since set her Facebook page on private mode and media outlets have likewise not provided links to it in order to protect her privacy.

In the caption accompanying the shared photos, Lee had attributed the attack to the current political upheaval in the US.

Without naming names, she stated,

“I’m not saying instances like this didn’t exist before he came into power. I’m saying that because of his rants and beliefs that he’s made public to our country, people feel empowered to express their anger, hatred, bigotry, etc. in in appropriate ways.”

Clearly, Lee is referring to US President Donald Trump, whose standard rhetoric implies that he is against immigrants.

Racist attacker Alexis Duvall seemed to be having a meltdown. 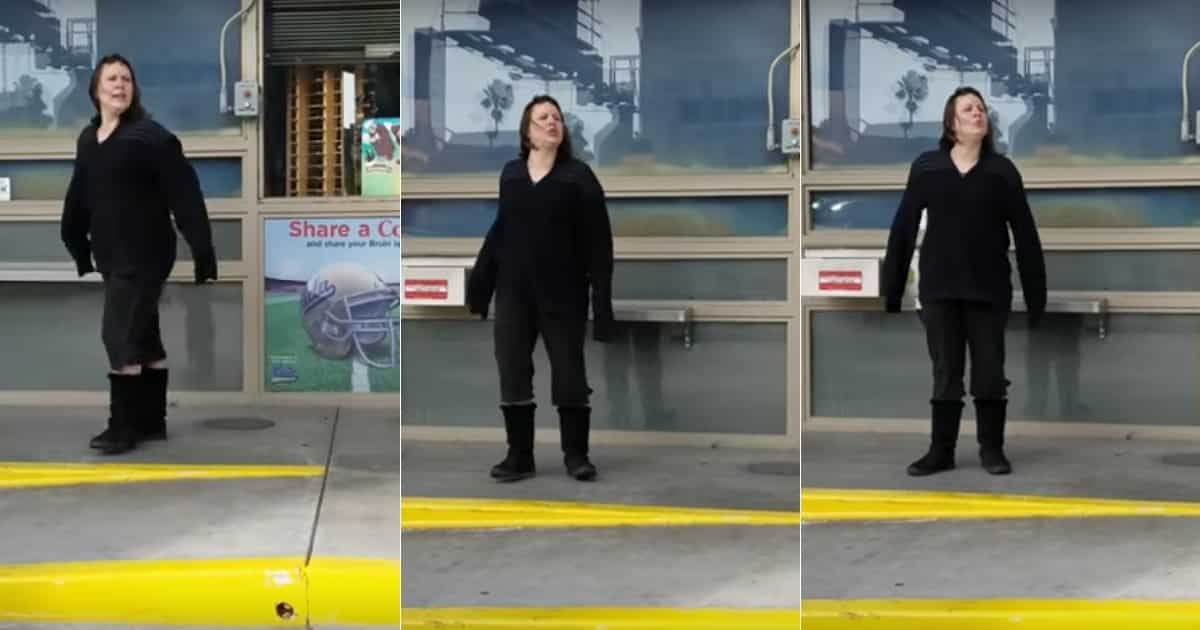 In any case, the woman who attacked the Korean grandmother will most likely be charged for battery. The attacker is currently being held on $50,000 bail.

One witness managed to take a video of racist attacker Alexis Duvall.

Other reports revealed, however, that the police have not classified Duvall’s attack on the elderly Korean lady as a “hate crime.” It was also noted that police think Duvall may be suffering from mental health issues.