A long time ago, somewhere across the shores of Sicily, was an island that was called many names – the island of Ferdinandea. This island was located somewhere in the narrowing channels between Sicily and Tunisia. Ferdinandea’s location was foreseen by many countries as one of the most strategic locations at its time of discovery.

Over four countries fought for the sovereignty of Ferdinandea but upon its sudden emergence from the ocean, Ferdinandea also retreated quickly. After six months of the island being above water, it sunk down.

This red x marks the location of the long lost island of Ferdinandea. 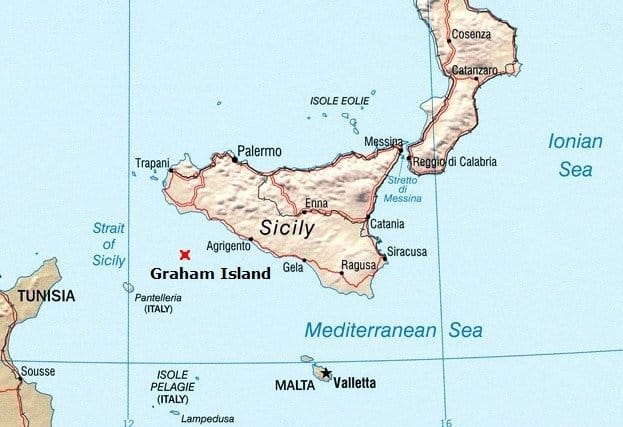 The island of Ferdinandea has one of the most amazing stories. The emergence of the island was far from normal. It started in July 1831 when people around Sicily were complaining about numerous tremors and an unusual pungent smell of sulfur being noticeable. Although, Sicily is used to volcano eruptions since it is a volcanic island, there were no signs of any movement from volcanoes. So everyone was puzzled as to where the tremors and smell came from.

Shortly thereafter, large clouds of smoke were billowing from the ocean water near the coast of Sicily. It was thought to be a ship burning at first but soon after a brig checked the damage, they only saw bubbling waters and dead fish on the surface. The captain of the brig was sure that this phenomenon was caused by an old sea monster. It took two weeks before the first sign of sulfur announced the birth of a new island.

A painting depicting a Royal Navy ship, HMS Melville, off the coast of Ferdinandea or Graham Island in 1831. 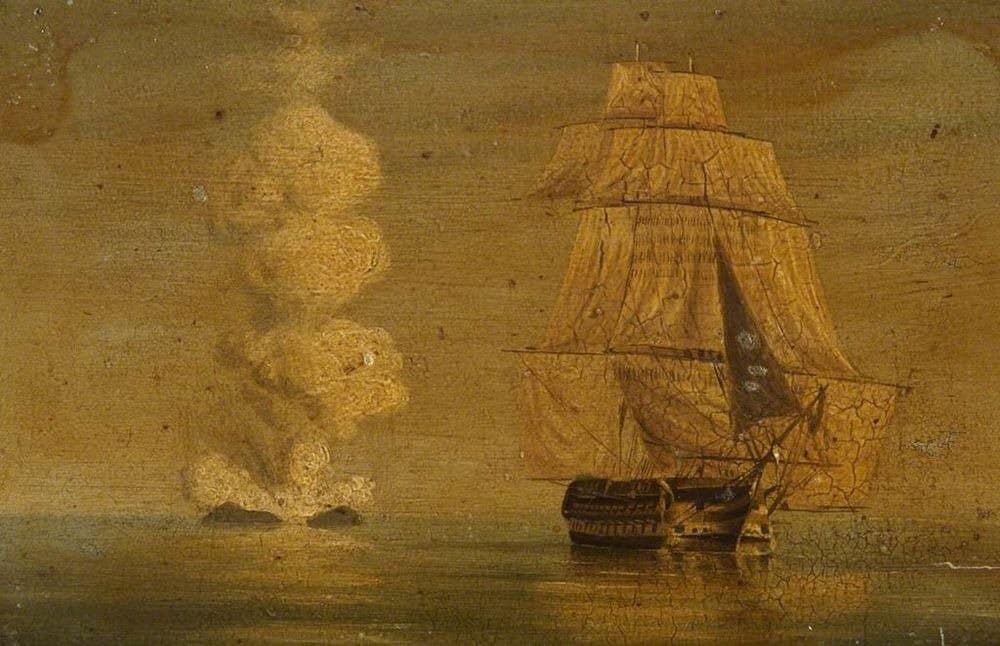 The island started growing over the coast, spewing lava and ash from its volcanic crater. Soon, its outline could be seen from Sicily. It reached to a staggering 63 meters high and had a circumference of 4.8 km. On the northeastern side of the island lay 2 ponds, with the bigger one spanning 20 meters.

Its location was found to be a strategic naval location and so four trading countries sought to own the small island off the coast of Sicily. The first nation to lay claim on the island was the British. By putting a flag on the island they proclaimed the island’s name to be Graham Island, after the First Lord of Admirality.

The country of Italy thought that this was prudent and the King of Italy, King Ferdinand II sent a corvette to the island to claim it as truly theirs. The King named the island after himself, thus it became known to be Ferdinandea. There were also the Spaniards who likewise took interest on the island. The last to ever come to the island were the French, who described Ferdinandea to be just like a bottle of champagne that was uncorked. The French later named the island Ila Julia for its sudden rise from the ocean on the month of July.

An illustration of the eruption of Ferdinandea or Graham Island from the ocean. 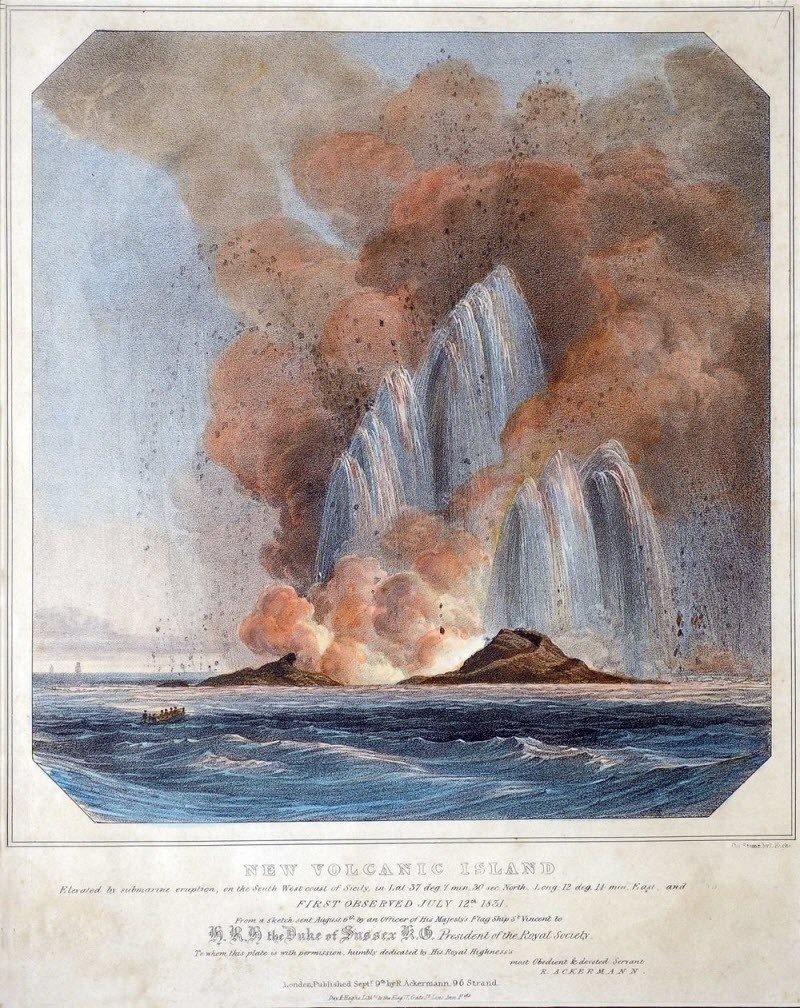 Ferdinandea, however, was not a steady island. It was not strong enough to withstand the ever-changing currents and waves of the ocean. Having soft and fragmented foundations, the island soon succumbed to the ocean on Dec 17, 1831. It reemerged once again during the First Punic War and was reported to have broken surface four or five times more since then. Because the surface of the island wasn’t deep enough, many ships avoided passing through the island in fear of sinking.

Last 2000, volcanologists said that the island will reemerge again and so Italy, thinking that there might be another dispute, dispatched scuba divers to the sunken island to perch the Italian flag and to put a plaque that says “his piece of land, once Ferdinandea, belonged and shall always belong to the Sicilian people.”

Should the island rise up again, however, it may no longer be disputed because the location is not considered to be strategic in today’s standard.

Another illustration of Ferdinandea or Graham Island's appearance 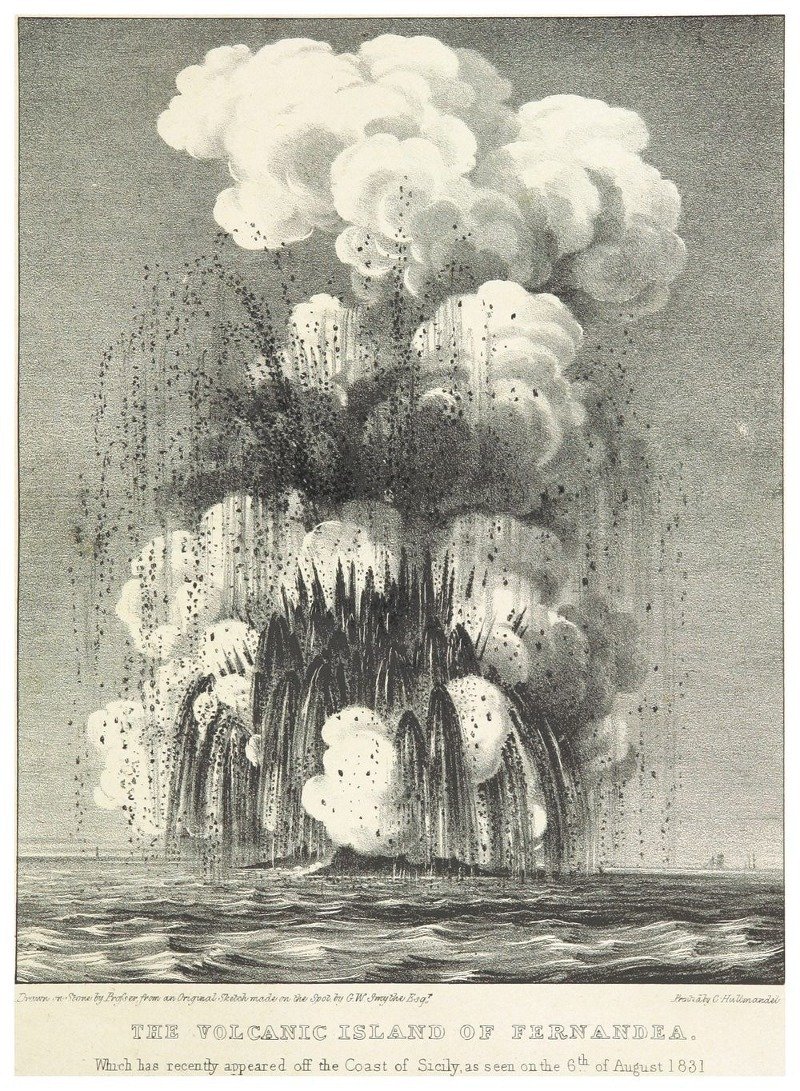