Having siblings and growing up together are among the most beautiful things that can ever happen to us. We may miss a few years of being together, like when a brother or a sister goes away to attend college or to live abroad. However, the beautiful bond remains and the moment that we meet again, it’s like there were no years lost and we are transported back to the time when we were still kids and played with mud.

Now, surely, we have loads of childhood photos to document those “mud-playing days,” and those photos tell golden stories about our past adventures, antics, hilarious moments, dorky hairstyles, and funny facial expressions. Yeah, we get it, we all gush and go “awwww” on those baby pictures, but being babies and kids sure make us look cute in those photos. But how will those pictures look like if adults recreate them?

Take a look at this compilation of photos and see how these siblings creatively recreated their hilarious childhood pictures:

1. From sweet and innocent to burly. 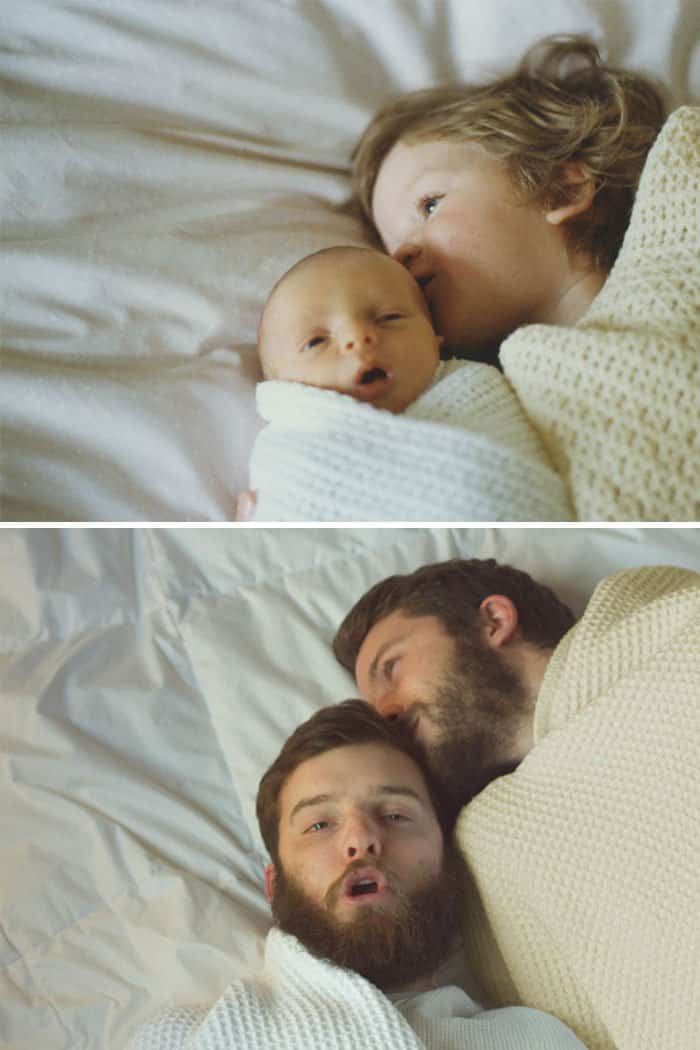 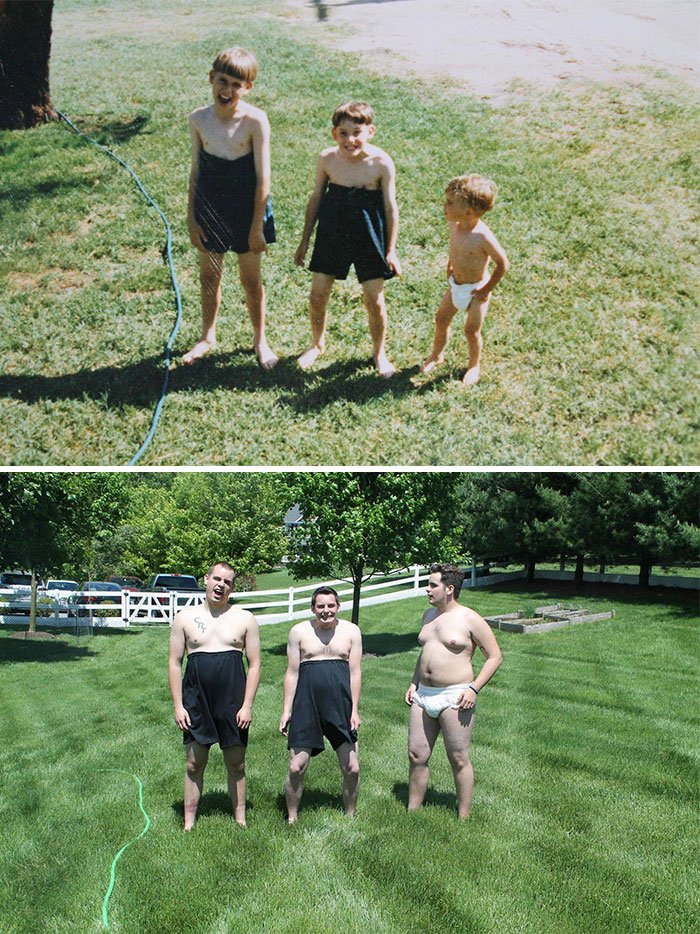 3. They recreated this photo 20 years after for their father’s birthday. They kind of grew up. 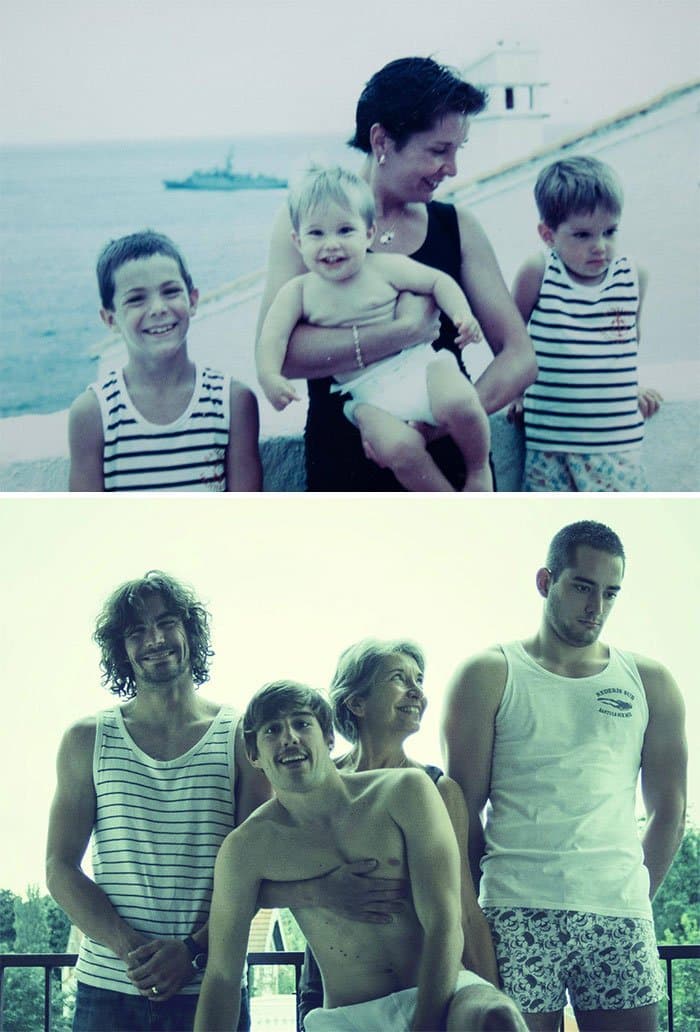 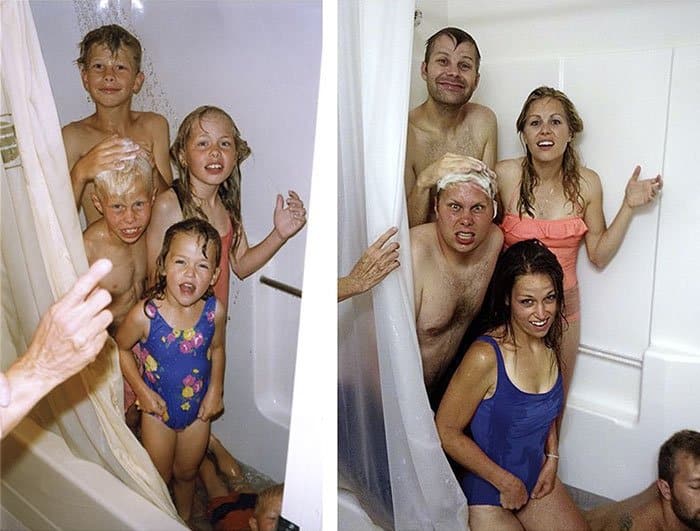 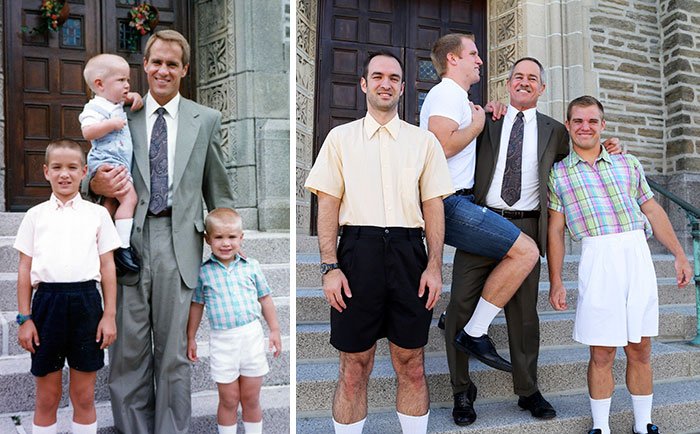 6. A photo recreation of a guy, his brother, and two cousins. 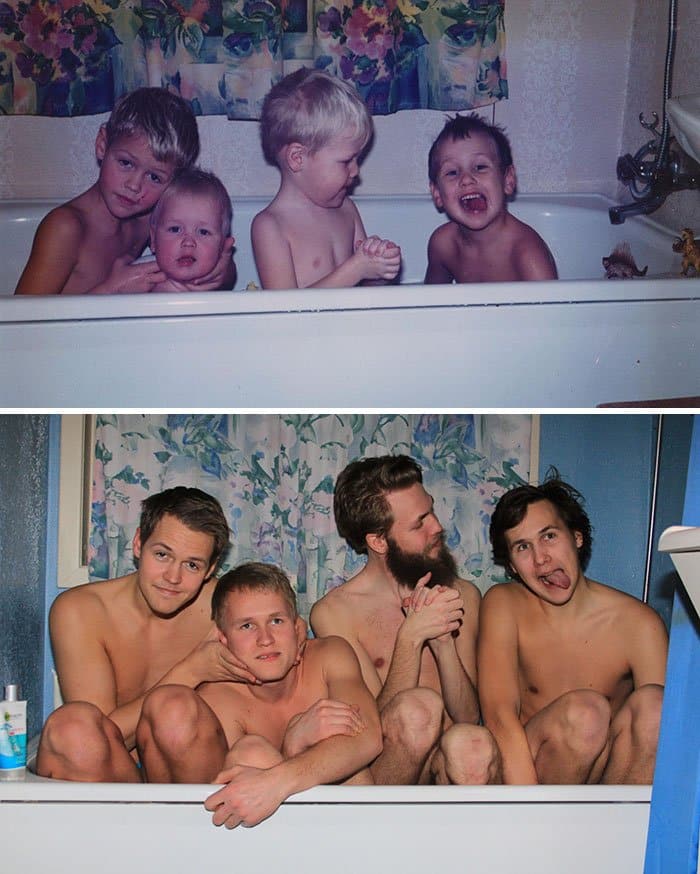 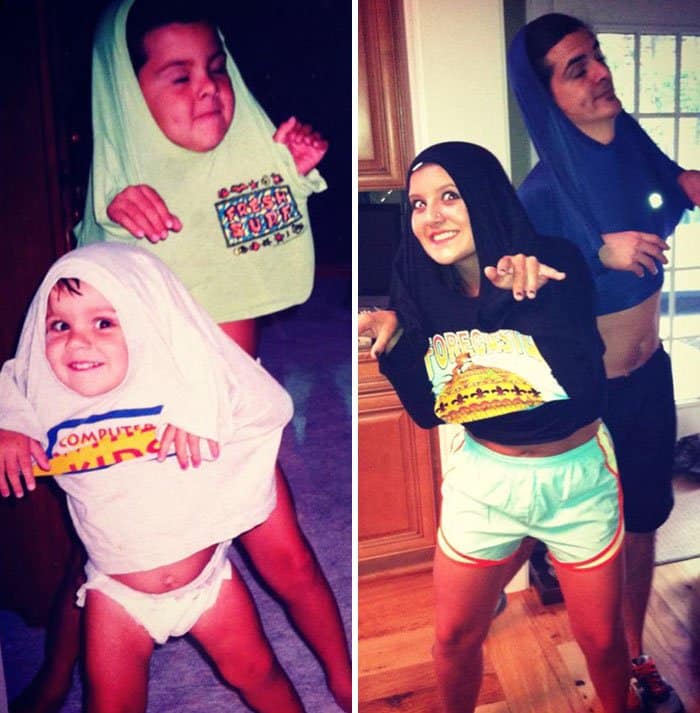 8. Such effort for the clothes. 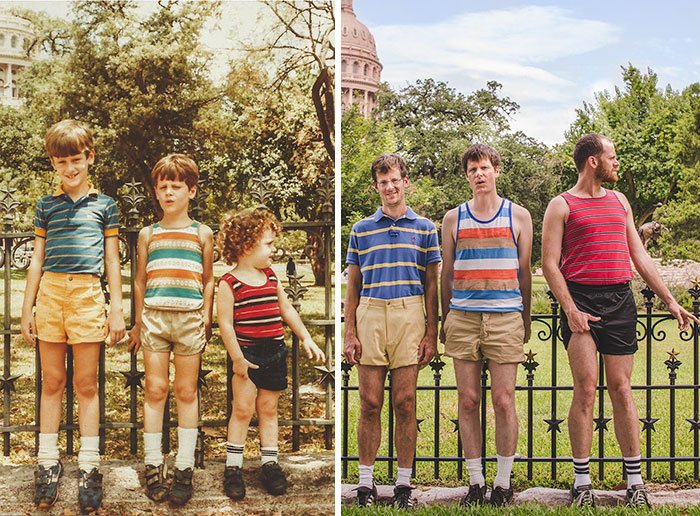 9. “It’s unexplainable how much effort and commitment went into this photo remake of me and my brother.” 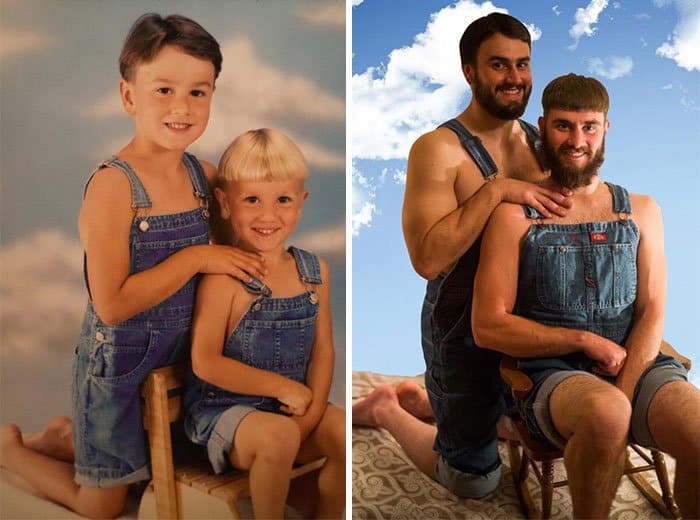 10. Should’ve shaved the legs, though. 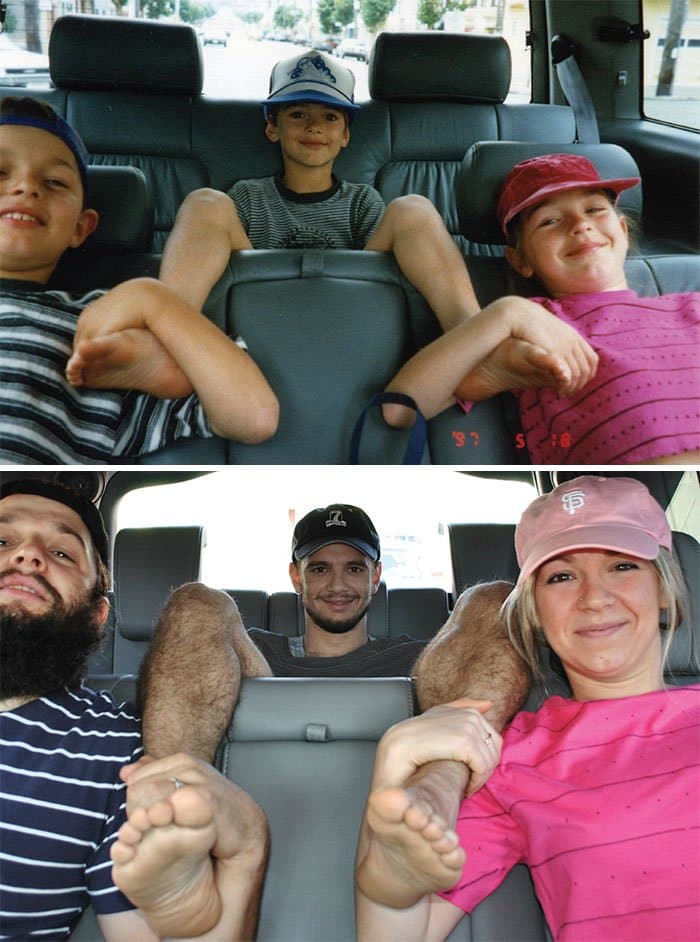 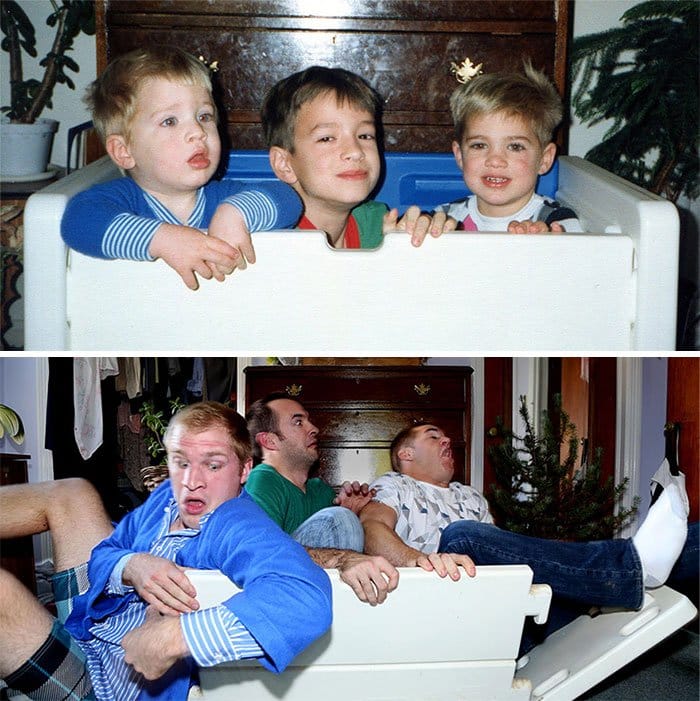 12. “11 years later: Burger King still sucks and my only friends are f*cking weird.” 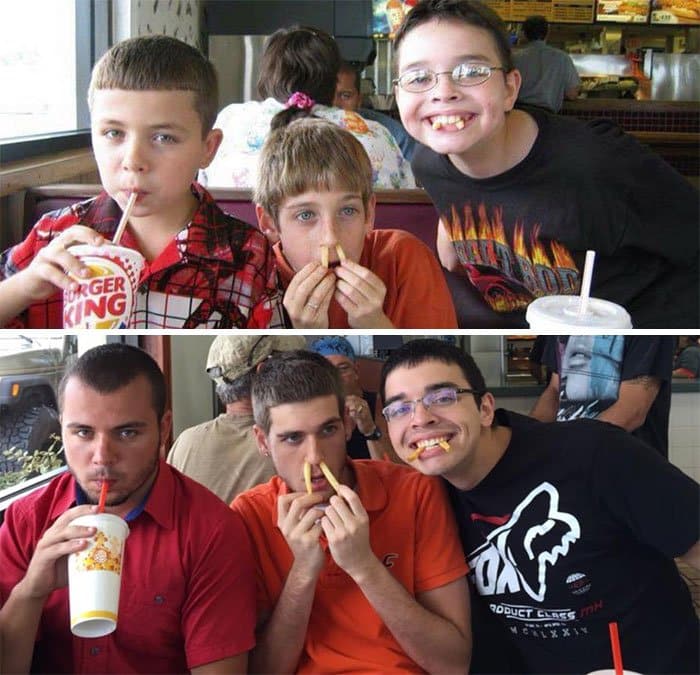 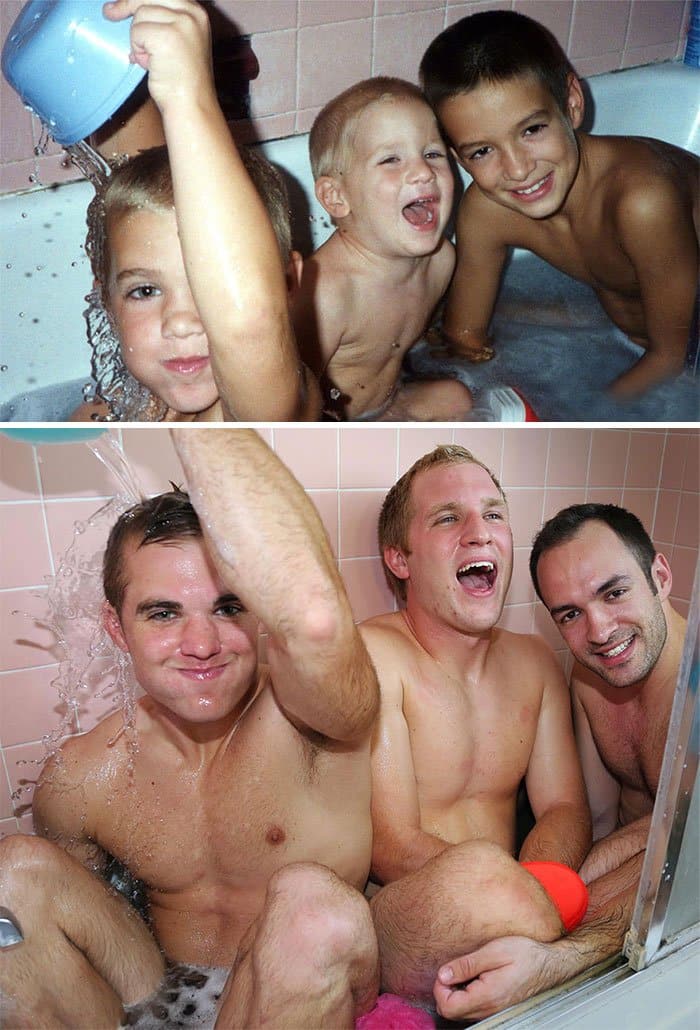 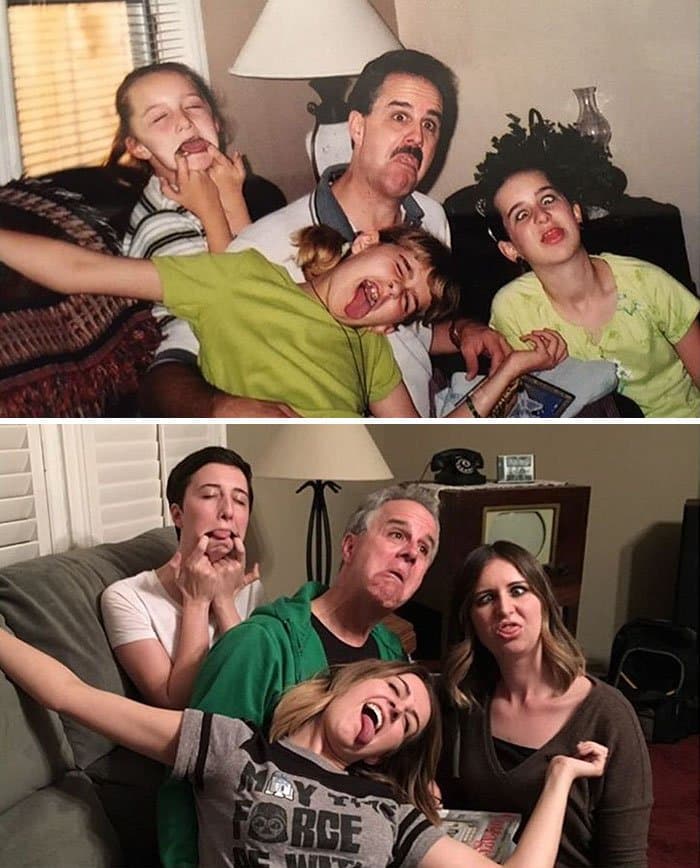 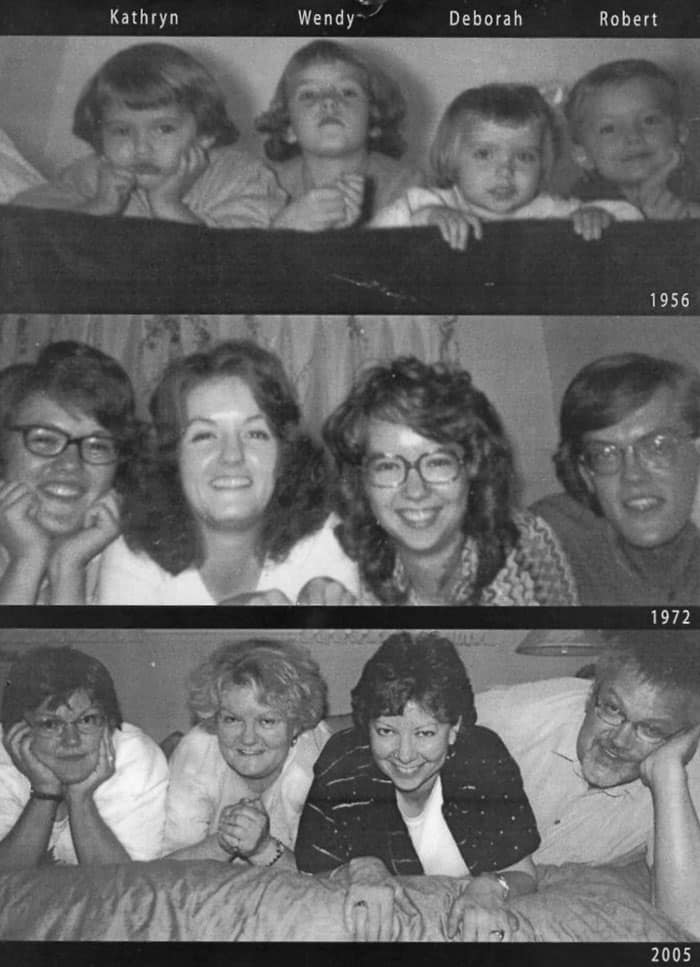 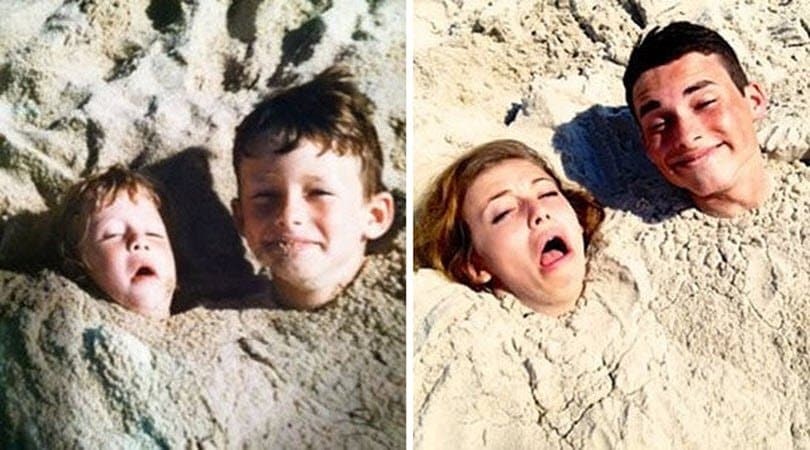 17. Great effort with the box! 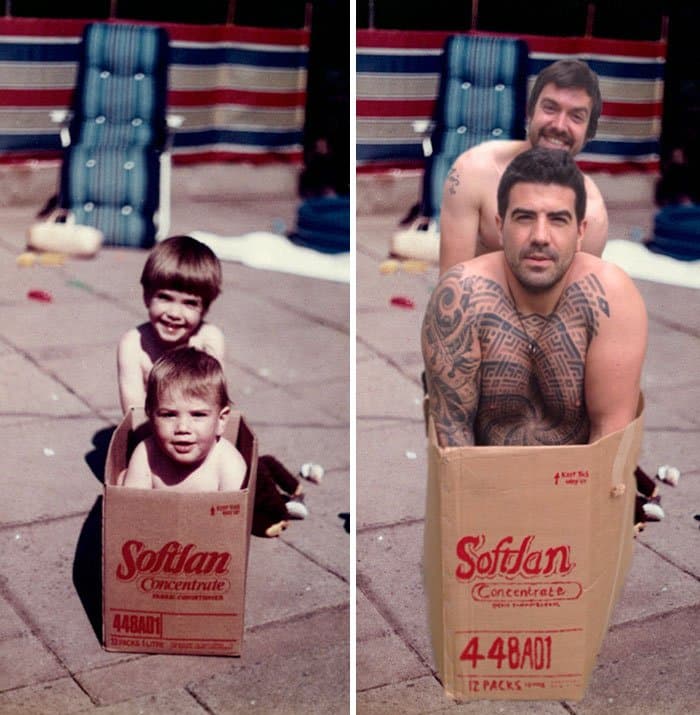 18. More than 20 years later and they’re still a bunch of dirty boys. 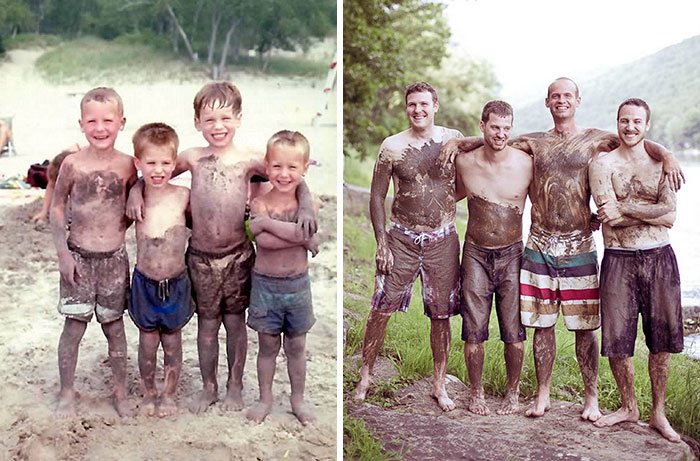 19. Photo taken 10 years apart. It’s a struggle to understand, though. 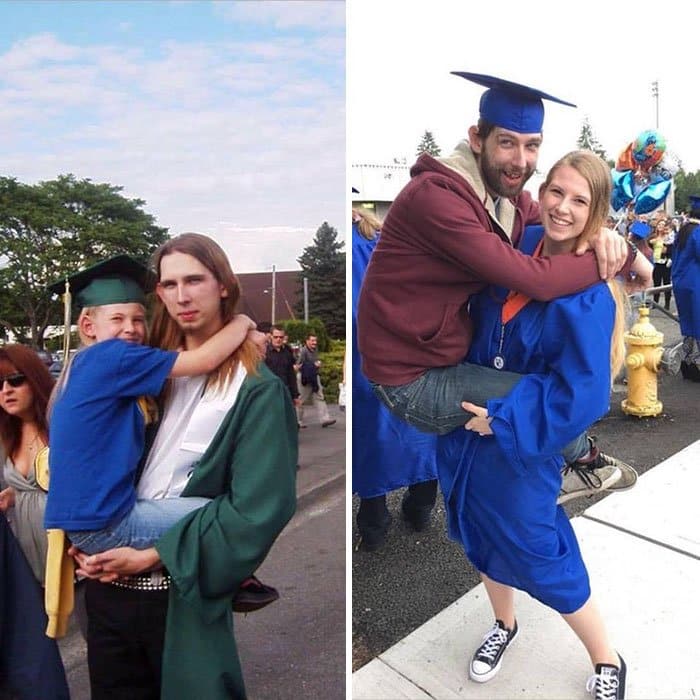 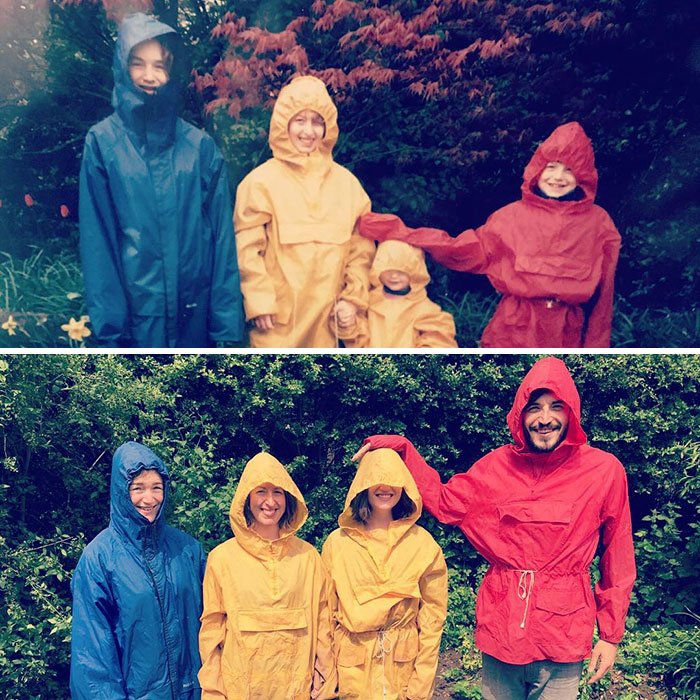 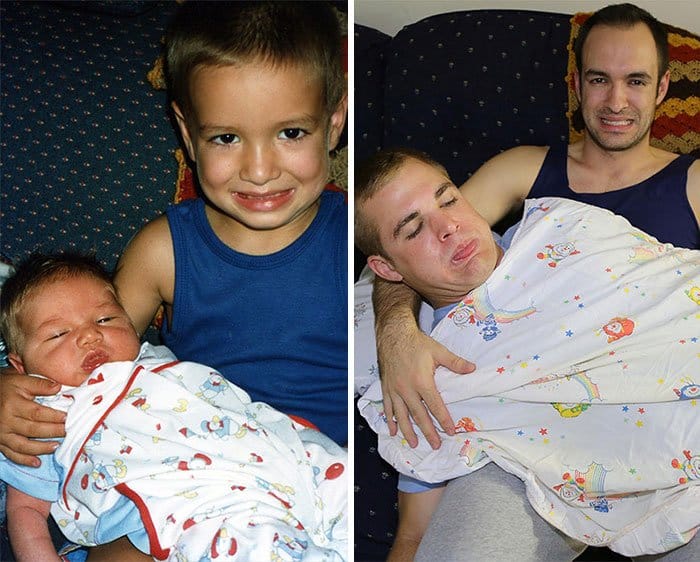 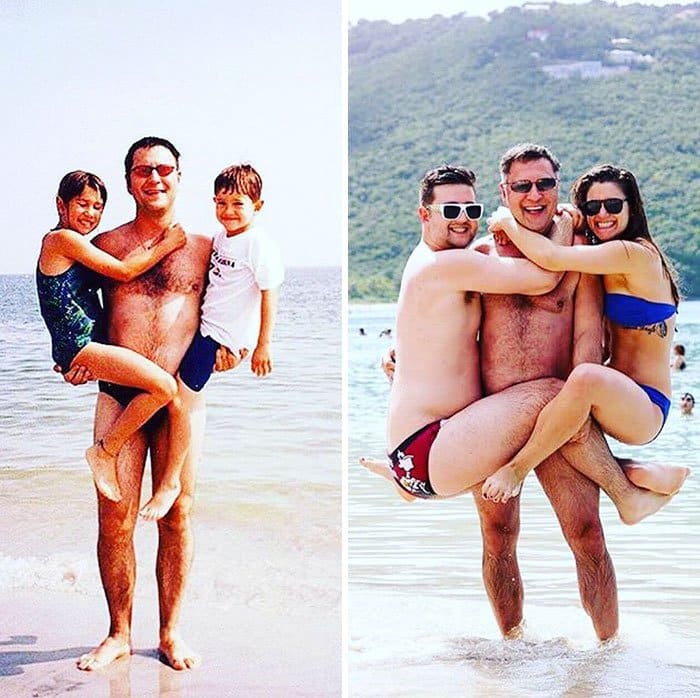 23. These guys got good genes! 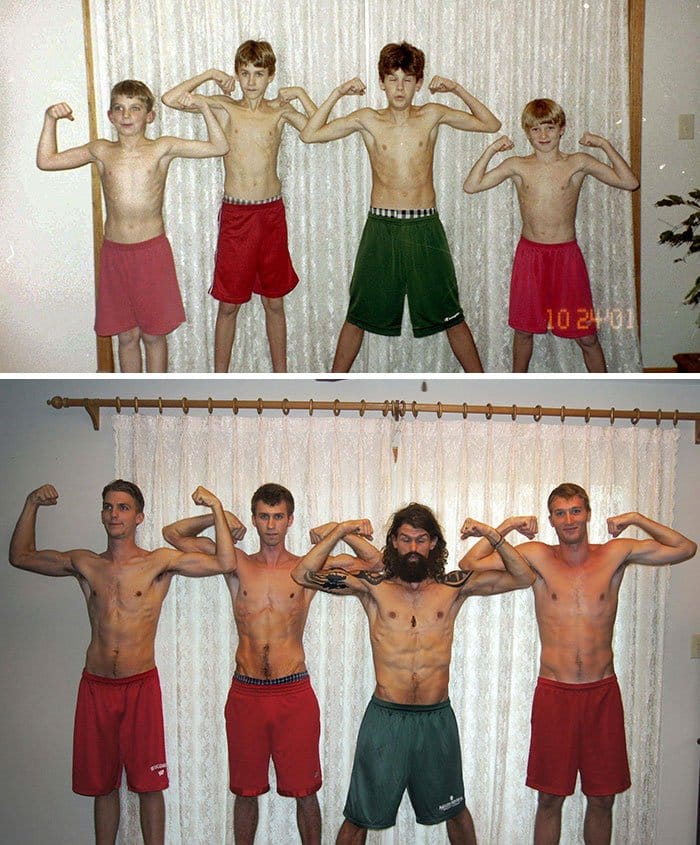 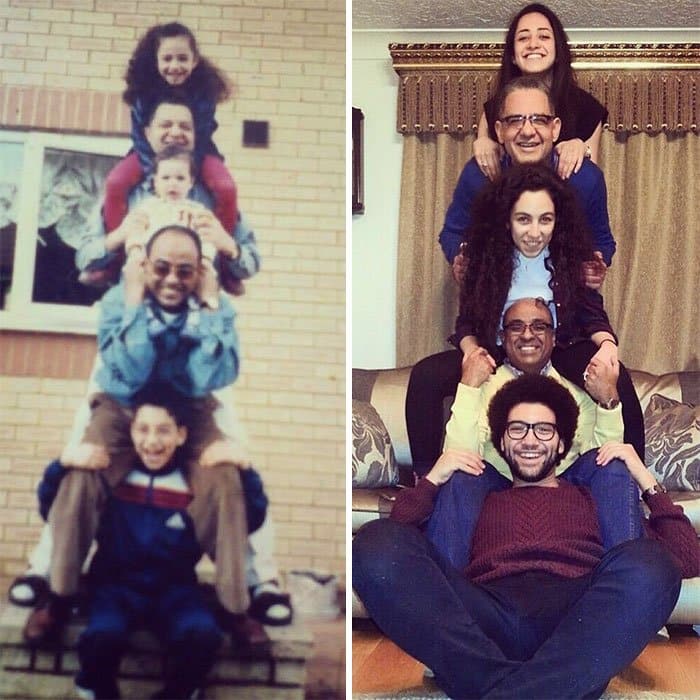 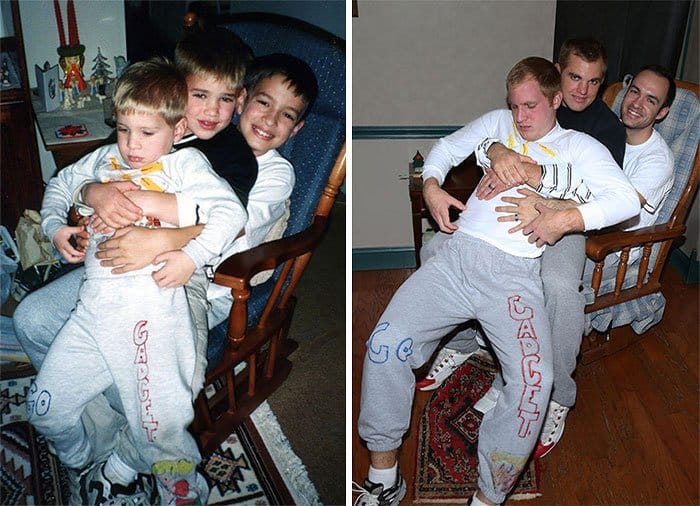