When faced with stressful situations, like being eaten alive by a vicious predator, our instincts would tell us to either fight or take flight. We can’t help it, we’re programmed with such kind of stress response. However, there’s a third option that only this newly discovered gecko can pull off – shedding skin, or scales, rather.

Geckolepis megalepis is part of the genus Geckolepis, which is a species of gecko characterized by fish-like scales that tear apart easily so they can rapidly escape from predators. It can measure up to approximately 2.8 inches in length and has the largest scales of all the fish-scale geckos in the world.

Each scale makes up about eight percent of the Geckolepis megalepis’ body. 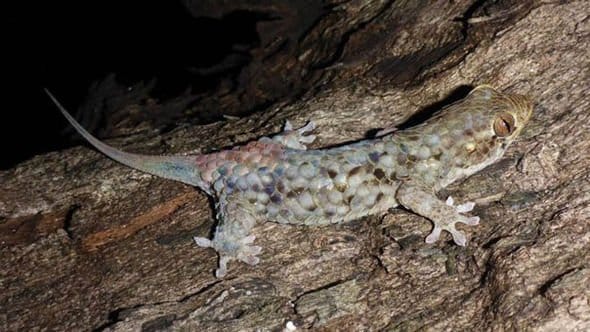 The research team wrote in their report published in PeerJ:

“Geckolepis megalepis is the first Geckolepis species to be described in 75 years (and it has been 123 years since the last currently recognised species was described).”

The elusiveness of this gecko species is partly because of the level of difficulty involved in catching it. You see, this gecko can shed its scales in a jiffy – and we mean faster than Lady Gaga in terms of costumes change. Its scales are attached loosely to its body along predefined patterns of “tear zones.” And while other geckos can also shed their scales, the G. megalepis does it faster, thanks to its relatively large scales. The large body surface area covered by each scale and the considerable amount of friction that these scales would provide when it rubs on anything both contribute to such lightning-speed shedding.

And when the lizard does shed its scales, it ends up looking like an entirely different creature. Marck D. Scherz, a researcher from the Ludwig Maximilian University of Munich in Germany, said:

So imagine, when a predator decides to munch on G. megalepis, it ends up chewing on a clump of scales while the sly gecko crawls away to safety, bare skin and all, but very much alive. Their scales come off so easily that scientists had to use cotton wool to touch them just so the scales won’t be displaced.

G. megalepis looks like a raw chicken fillet once it sheds it scales. 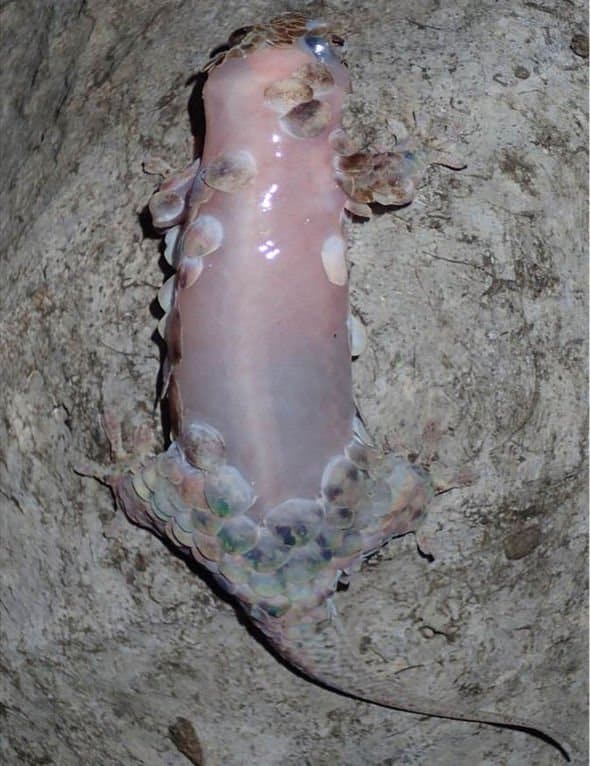 “You would think they are somehow protective, but really they are a decoy there for blocking the teeth or claws of whatever wants to eat them.”

“They get stuck in those jaws or claws and allow the gecko to escape naked and alive.”

As if rapid disrobing is not enough, this gecko regenerates its scales faster as compared to its gecko cousins. It only takes the G. megalepis a few weeks to grow its scales back. And despite the enormous amount of energy required to regrow these scales, it’s still a better option than being eaten alive.

As Scherz put it:

“Whatever the cost of regenerating the scales, it cannot be as great as losing your life to a predator.

“So even when the cost could be enormous, it is worth it. That’s an interesting evolutionary strategy.”