Some say that social media has made monsters out of us. Some people depend on Facebook and Instagram so much for their temporary high, courtesy of likes and shares. These people will do anything just to get the attention they want. They even resort to doing dangerous and illegal stuff all in the name of likes. Some actually got away with it while some were rightfully seized and turned over to the authorities.

Take this Man from Algeria, for example, who did a very stupid thing just to attract attention. In a video post, the man showed the child, reported to be a relative, being held just by his shirt 150 feet above the street and said,

This man from Algeria did the unthinkable just to get 1,000 likes on Facebook – he dangled his infant relative out of the window of their 15th-floor apartment. 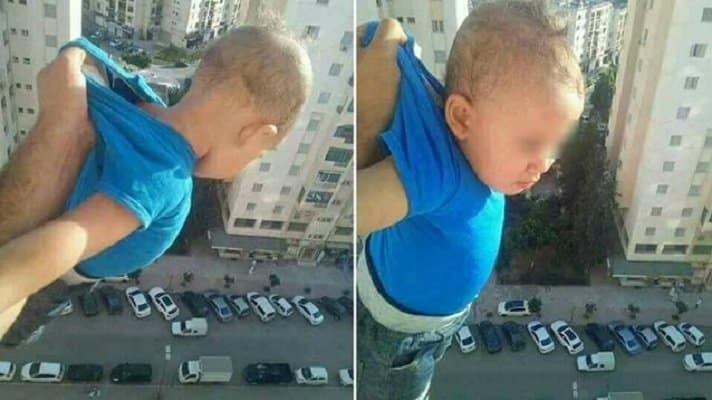 Horrified users who saw the clip reported the man to the authorities. The man, who was located in the capital city of Algiers, was believed to have hailed from the suburb city of Bab Ezzouar.

He was tried on child abuse charges and was sentenced to two years in prison.

In court, the prosecutors discovered that the man did the stunt just to have high engagement on his Facebook account.

“What is most striking is that it appears that the father is carrying his son with his left hand while using his right hand to take the picture, this means the picture is more important than the child’s life.”

It was falsely reported earlier that the man holding the child was the father.

The man may not have been aware that he was committing a crime, says psychologist Dr. Nouha Rahmani to The New Arab. She added that the action should not be tolerated in Algeria.

The incident drew comparison to another famous stunt, in which the late Michael Jackson dangled his son Prince over a hotel balcony, which drew outrage from people all over the world.