Everyone loves a good-natured prank. For example, who could forget about that viral video of a grandmother who pranked her husband with her funny water bottle coin ‘magic trick‘? Or that epic camel toe prank by a bunch of guys from YouTube? Man, we all had a good laugh with those ones.

Honestly though, I still can’t decide whether this recent prank is plain genius or plain evil. As it turns out, Twitter netizen JustBasicDave thought of an idea of pranking people at an airport.

What did he do, you ask? Well, he made stickers of wall power outlets and stuck them around the airport so as to victimize travelers hoping to charge their devices.

JustBasicDave is an evil genius! 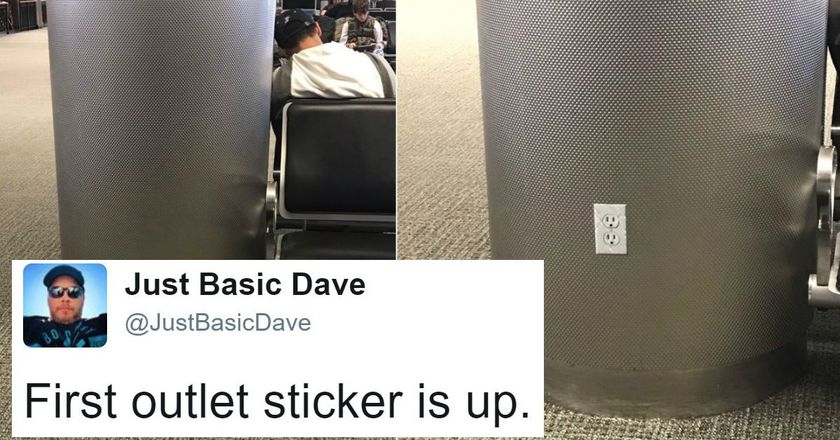 Here’s one of his victims:

And then another girl!

As you can expect, Twitter netizens were mixed in their reactions about this prank.

“There’s a special place in hell for people like you.”

“No matter what I do, I could never measure up to this level of evil.”

Some, however, weren’t very entertained by it such as @akoniingles who pointed out

“The airport is one of the most stressful places to be in… I can’t imagine realizing it’s a sticker. It’s clever but damn demonic.”

Well whether that prank made you crack up or not, we can’t deny it’s brilliant.

When asked by Twitter users about where he got the fake electrical outlet stickers, JustBasicDave responded he ordered them from Amazon. So hey, in case you’re thinking of pulling this same prank, you know what to do and you know where to go.