Reports said that the fabricated products were ready for distribution and that six immigrants from Myanmar and Indonesia were also arrested during the said raid. Since then, Malaysia, the country with the largest number of Milo consumers, launched a campaign educating its loyal customers how to spot the fake products from the original.

How to spot fake Milo packaging from the original. 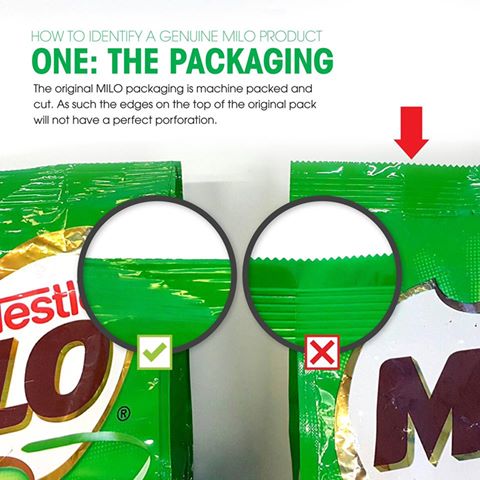 To date, a photo on spotting the difference is now circulating on Facebook with the objective of avoiding potential harm and further damages to Nestlé and its loyal customers. According to Nestlé, the authentic Milo packaging is machine packed and cut unevenly unlike the fake package with perfect triangular cuts.

“Dear fans, Nestlé Malaysia has been alerted that the authorities have found counterfeit versions of Milo packaging and Milo powder being produced in Negeri Sembilan. Please be assured that we are working very closely with the relevant authorities especially the Ministry of Domestic Trade, Co-operatives and Consumerism to ultimately curb this matter as the safety and quality of our products is a non-negotiable priority of Nestlé.”

With the rising number of cases pertaining to fake products, customers are encouraged to remain vigilant in purchasing items which might greatly affect their health and safety. Likewise, the consumers are advised to report any misconduct so that the necessary and immediate actions may be taken right away.